Review: 10 anime shows to keep your energy up this winter

It's easy to lose energy during the winter, especially the pandemic. Keep you blood pumping by watching one of the top movie genres of all time. 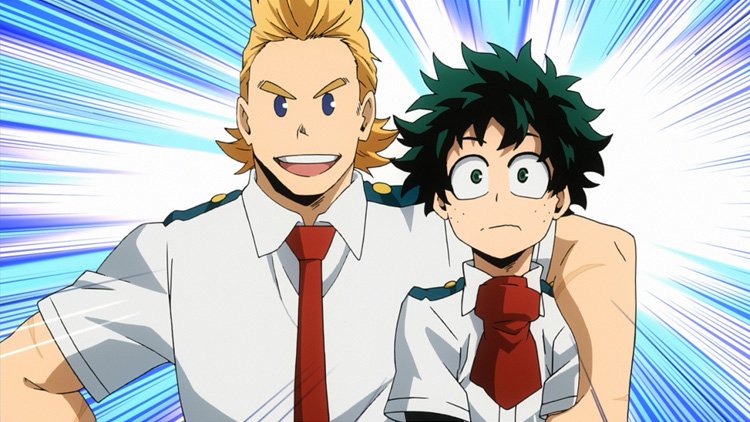 "My Hero Acadamia," a show about a school full of students with extraordinary powers — and tops this list of anime shows to watch.

Bored at home? Don’t know what to watch while sitting on the couch eating your snacks? Want anime to consume your life to where you never stop watching it and you end up buying merch and posters of anime characters? Maybe even sob and fall in love with fictional characters?

Though anime seems to be a genre all by itself, the style of Japanese animation can range from playful fantasy to intense emotional dramas. Here are ten shows you can watch when you’ve finished your asynchronous work for the day.

10. “A Silent Voice” (“Hepburn: Eiga Koe no Katachi”)
This movie is about a grade school girl with impaired hearing who gets bullied repeatedly and then transfers to another school. Years later, one of the boys who bullied her, finds her and tries to make amends. This movie came out in 2017 in the United States. It is two hours and 10 minutes long. Though to be warned, it does mention things like suicide and contains some bullying. If you are sensitive to this, I do not suggest watching it. Though I really like this movie. It is a good tear-jerker and teaches some good life lessons. You can watch it right now on Netflix.

9. “Tokyo Ghoul”
A college student who goes by Ken Kaneki, survives against a deadly encounter with a ghoul, Rize Kamishiro, and gets rushed to the hospital in critical condition. After he gets out of the hospital he discovers he was transformed into a half ghoul. Unable to eat normal food, other than plain black coffee, and needing to survive on human flesh and organs. This show first came out in 2014. I personally really like this show a lot and would rather watch it with sub. There is blood, death, and gore in this show throughout most of it, so don’t watch if you are sensitive to that. There’s a lot of fighting going on between many characters. I think it’s an absolutely fascinating idea. You can watch this on Funimation and Crunchyroll, you can watch it in both subtitled and dubbed in English.

8. “Demon Slayer” (“Kimetsu no Yaiba”)
This show is about a young boy, Tanjiro Kamado, who becomes a demon slayer after his entire family was massacred and his younger sister Nezuko, gets turned into a demon by Muzan Kibutsuji, who is the leader of the demons. It has a movie and season two coming out this year! This show is packed full of fighting and demons. There is blood and death of course, so another warning for blood. Some of the characters are quite interesting to me that you’ll meet in later episodes of this show. This came out in 2019 and can be watched on Netflix, Crunchyroll, and Funimation.

“Dr. Stone” is a series that first aired in. 2019. It is about a world that for some unknown reason became petrified and remained that way for thousands of years. It wasn’t until two boys were awakened. One of them, Senku Ishigima, a scientific genius, figures out a way to get people unpetrified and back to flesh but it becomes known really soon that this new world will be a battle between science and power taking place in a world of stone.  This one I found to be very interesting because the main character, Senku, makes everything from scratch like glass, clothing, gunpowder and baskets. It shows every little thing needed to make it and how to make it and I think it’s pretty neat stuff. It can be watched on Crunchyroll and Funimation.

6. “Hunter x Hunter”
This show is about a young boy Gon Freecs, who becomes a hunter in order to find his father he doesn’t remember. Hunters aren’t the ones who go hunting for deer and all that. These are hunters are people who are licensed elite members of humanity who track down secret treasures, rare beasts, or even people. Gon meets another young boy who goes by Killua Zoldyck who becomes his best friend and is the part of the famous and strongest assassin family. I personally absolutely love this anime. It’s definitely long and can have some more chill, slow parts then the action packed parts but I adore this anime. The slow parts can get a little boring which is one part that’s partly a downside but there is so much in this anime I love. Killua is actually one of my favorite anime characters. This show came out in 2011, and you can watch this on Netflix and Crunchyroll. Warning: Netflix doesn’t have all of the seasons and only has about half.

5. “Haikyu!!”
This show is about a boy, Shoyo Hinata, who wants to become one of the best volleyball players though he’s only about 5’3”. He wants to be like the ‘Little Giant’ who was 5’5” and the ace of the Karasuno volleyball team. Hinata never had a volleyball team until his last year in middle school when they lost their first game with one six players. Little did Hinata know that he met his best friend and his teammate, Tobio Kageyama.  I love this show so much. It was one of the reasons I got more into volleyball than I already was. I cherish this show so much in my heart. It gets me so hyped up and excited whenever I watch it. You can watch this on Crunchyroll and Netflix, though the latter doesn’t have all of the seasons available.

4. “Seven Deadly Sins” (“Nanatsu no Taizai”)
This show is about Princess Elizabeth of Lioness, searching for the seven deadly sins. They are known as the the holy knights who betrayed the kingdom and had murdered a grandmaster. Though she knew the holy knights were becoming the enemy and she needed their help to stop them because they were the only ones who could. There are some definite lovable characters in this. There’s more behind the scenes than you would think there would be which is what I adore about this show. I also really like the art style and the voice actor of Meliodas. That voice actor plays many characters that I know and love. This anime can be watched on Netflix. They even have a movie called “Seven Deadly Sins the Movie: Prisoners of the Sky.”

3. “Sword Art Online”
This one is about a boy Kazuto Kirigaya or also known as Kirito and Asuna Yuuki who both meet in a virtual reality massively multiplayer online role-playing game (MMORPG) game they get trapped in. Kirito tries out a new game called “Sword Art Online” and uses his nerve gear headset and starts playing it. The creator of the game summoned everyone together and told them they couldn’t leave. There was no log out button for this now. If people died in game they died in real life. If their nerve gear was unplugged from the outside world they died in real life. They had to beat the game to get out of it. This show has been a long favorite of mine. A lot of people seem to not like it because Kirito can be a bit OP, which is fair enough. It has definitely made me sob before though because of one specific scene. Of course I can’t say it since that would be spoilers. I personally think it’s really good despite him being a little OP at some parts. We all have our opinions and they are all valid. I also think that virtual reality at this level would be absolutely amazing! I would immediately sign up for one. Being able to be in a fantasy world like that would be a dream come true. The official soundtrack is also perfect for this anime! You can watch this on Netflix and Crunchyroll, though Netflix doesn’t have the newest seasons up yet.

2. “Attack on Titan” (“Shingeki no Kyojin”)
This is about humanity living inside 3 incredibly strong, 50 meter walls called Wall Maria, Wall Rose and Wall Sina. Each of the walls protect humanity from giant human eating titans. This show surrounds the main character Eren Yeager, who vows to kill every single titan after titans broke through Wall Maria where he lived, and ate his mother. His home town was completely destroyed and many people were killed or eaten. This anime is full of action blood, death and gore. If you are sensitive to this don’t watch! This anime deserves to be one of my top five and a lot of people would agree with this. The art style is absolutely amazing and truly gorgeous. Though for the newest season with current going episodes, they changed the titans to CGI (computer generated imagery). I was a little bummed since I don’t necessarily watch things that are CGI because I like 2d better, but it still looked great nonetheless. This show gets me pumped up no matter what and I hope more people can get into it other than the thousands of people already watching it. You can watch this on Crunchyroll, Funimation, and Netflix, though Netflix only has one season though.

1. My Hero Academia (“Boku No Hero Academia”)
This is about a world where humanity has gained superpowers called quirks. The main character Izuku Midoriya, also known as Deku, is part of the 20% that is born quirkless. Though he has a big dream to become a superhero and to attend a japanese school for aspiring superheroes, UA High. No offense to the English voice actor of Izuku, because he’s wonderful and all, but I don’t think that voice suits Deku. Bakugo Katsuki and Keigo Takami suit Hawks’s voice well. I still prefer the sub though. Other than that I really really enjoy watching this. I am absolutely in love with some many characters. Hawks is my top favorite anime character of all time. You can watch it on Crunchyroll and Funimation. They have two movies “My Hero Academia: Two Heroes,” which you should watch once you get to the special episode for season 3, and “My Hero Academia: Heroes Rising,” which you should watch after season 4.