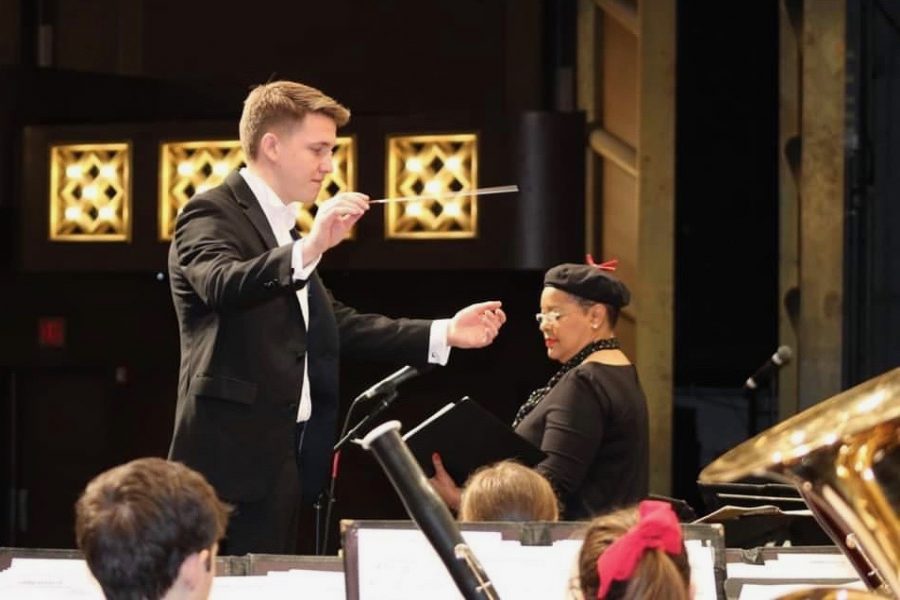 Spencer Hile, director of MCHS bands, leads the symphonic band on February 1 at the Illinois Music Education Conference in Peoria. This was the band's first major statewide recognition for musical excellence.

On Saturday, February 1, MCHS’s symphonic band performed an All-State concert at the Illinois Music Education Conference in Peoria. This year was the first time in school history that the symphonic band was selected to perform at the conference.

The symphonic band was a featured performance group that played a concert at the Peoria Civic Center. The band prepared thirty-minutes of music to inspire music educators and set a standard of excellence for music education.

The Illinois Music Education Conference is the largest annual music education conference in the state of Illinois. Every year around 12,000 music educators attend this conference to improve their teaching.

“The chance to display the work we have done all year was very rewarding,” said Spencer Hile, band director at MCHS. “It was great to take a moment away from pulling apart the details and just enjoy making music.”

The symphonic band submitted a recording to judges who selected the top bands from across Illinois. They were one of five bands selected from dozens to perform at the All-State concert.

“It was just so moving,” said junior Cole Zgrzebski who plays flute in the symphonic band. “It just felt like we were all together to make music.”

“People were cheering and clapping and giving standing ovations,” said Putz. “Rumor came around that we were one of the few bands that got these ovations, and it just kind of made the experience a little more special in my eyes.”

One member of the symphonic band, senior Eliza Koch, was selected from hundreds of flute players to perform with the All-State Honor Band.

“Playing with the All-State Honor Band was incredible,” said Koch. “I had such a positive experience, and it is so nice to know that all of the work I did to get there was absolutely worth it.”

Every member of the symphonic band puts hard work and hours of practice into perfecting their music for symphonic band. The band meets outside of class time and works regularly with college professors and other educators to better their performance skills.

“There is a high standard set every day for students to come prepared for rehearsals,” said Hile. “It is expected that students learn their music outside of class so that we can use our time during the school day to put everyone’s parts together and focus on the details of a piece of music.”

This isn’t their only major accomplishment. Last year the symphonic band was selected out of hundreds of applicants to perform at the University of Illinois Superstate Concert Band Festival in May. This was also a first in school history.

They have also been recognized twice for excellence at the Chicagoland Concert Band Festival.

The symphonic band is set to be one of 16 bands to perform at the National Concert Band Festival in March.