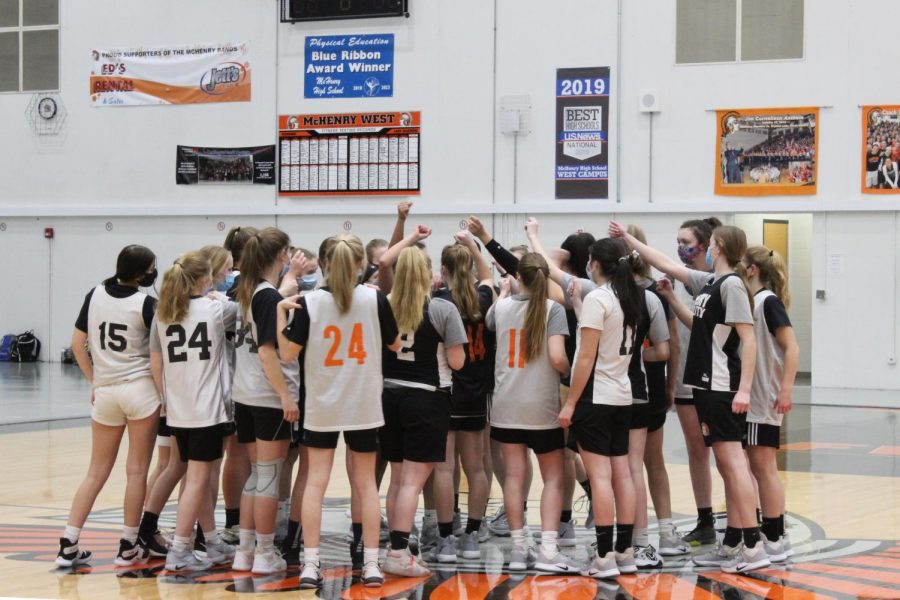 The varsity girls basketball team cheers together during a practice in the West Main Gym on February 2.

MCHS’s boys and girls basketball teams start their season this week. Players are very happy to be back playing basketball and to start to play against other teams.

Each team practices almost everyday. According to Chris Madson, one of the boy’s basketball coaches, the team practices 6 times a week, off on Sundays. The boys practice in Buckner gym and workout together there.

The simple fact of being able to play basketball makes so many players excited.

“This season, my favorite thing about practices or games was just being able to be there. Not knowing if we would have a season or not was really stressful, and simply being allowed to get back in the gym to practice/play with my teammates one last time before I graduate really meant a lot to me,” described Daivd Wachter, a boys basketball player. Participating in games and practices means more to a lot of the players than what meets the eye, they get to play their sport and push themselves to success.

Seniors on the basketball teams look forward to the season ahead of them, hoping to finish their high school sports career strong. This basketball season has been very unpredictable for the players, but they are thrilled just to have a season to play.

“This is my last year playing and this season is very unprecedented, so I’m most excited to see what comes of it. It obviously won’t be the normal senior season that I’ve dreamt about, but I am very excited to get one last go at it with my teammates and most importantly the seniors that I’ve grown up playing with,” explained Wachter.

Most players would say that the morale has never been higher. The teams are so excited to be back playing basketball. According to Ashley Wachter, a girls basketball player, “I think we have a lot of potential going into this season and I can’t wait to see where it takes us! The drive for success is extreme this season, especially for this year’s senior players.”

As the basketball season progresses the players become more excited as they approach their first game. They will soon be able to see if all of their hard work at practice has paid off.