Three-part plan cancels up to $20,000 in debt for working and middle-class borrowers 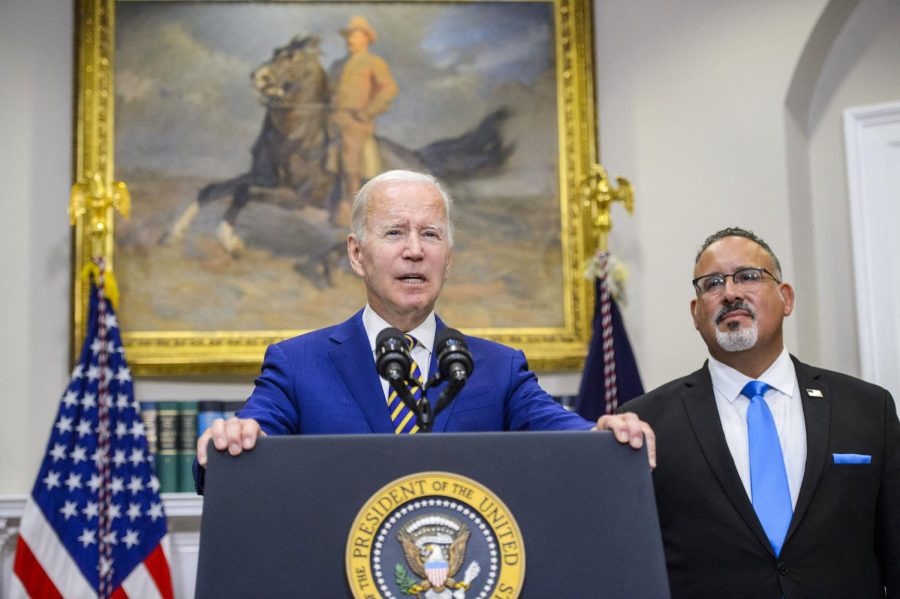 President Joe Biden speaks as Secretary of Education Miguel Cardona looks on after Biden announced a federal student loan relief plan that includes forgiving up to $20,000 for some borrowers and extending the payment freeze in the Roosevelt Room at the White House in Washington, D.C., on Wednesday, Aug. 24, 2022.

“Ninety-five percent of borrowers can benefit from these actions,” said Biden in a remark. “That’s 43 million people. Of [those], over 60 percent are Pell Grant recipients … Nearly 45 percent can have their student debt fully cancelled.”

Many teachers at MCHS have been impacted by the debt cancellation program, including Spanish 1 and 2 instructor Araceli Campos, who took out loans for her undergraduate tuition.

“While I haven’t made many payments because of the loan pause, payments are definitely a stressor,” she says. “The new proposed loan forgiveness program would benefit my family and I substantially. [It] would take my personal debt down quite a bit, which is relieving in many ways.”

Despite benefits, critics have expressed concern over the program — especially over its impact on inflation.

“The changes announced today will likely cost more than double the amount saved through the recently passed Inflation Reduction Act,” wrote the Center for a Responsible Federal Budget, a non-profit organization. “ It is extremely troubling to see the Administration reverse the legislative progress made on deficit reduction.”

“As a consequence, about $50 billion a year will start coming back into the Treasury,” he said. “Independent experts agree that these actions will provide real benefits for families without meaningful effect on inflation. The point is this: there is plenty of deficit reduction to pay for the programs.”

When loan payments resume, they will go down from 10% of a borrower’s discretionary income to 5%.

The Public Service Loan Forgiveness Program aimed at those in public service professions will also be ‘fixed’ to provide further relief, says the Department of Education.

“I absolutely think there should be more loan forgiveness programs to make higher education more accessible,” Campos adds. “In this day and age, it is not as easy to obtain well-paying jobs without some kind of post-secondary credential, so loans are essentially necessary for most. Creating more programs to give financial assistance to those who started at a disadvantage seems like a logical move to make.”

As a final aspect of the plan, Biden will fight to double the Pell Grant and make community college free, according to a White House fact sheet. The Department of Education will also ensure student loan borrowers get value for their college costs.