After their season was “paused,” MCHS’s volleyball teams hitting the court with a renewed desire to win 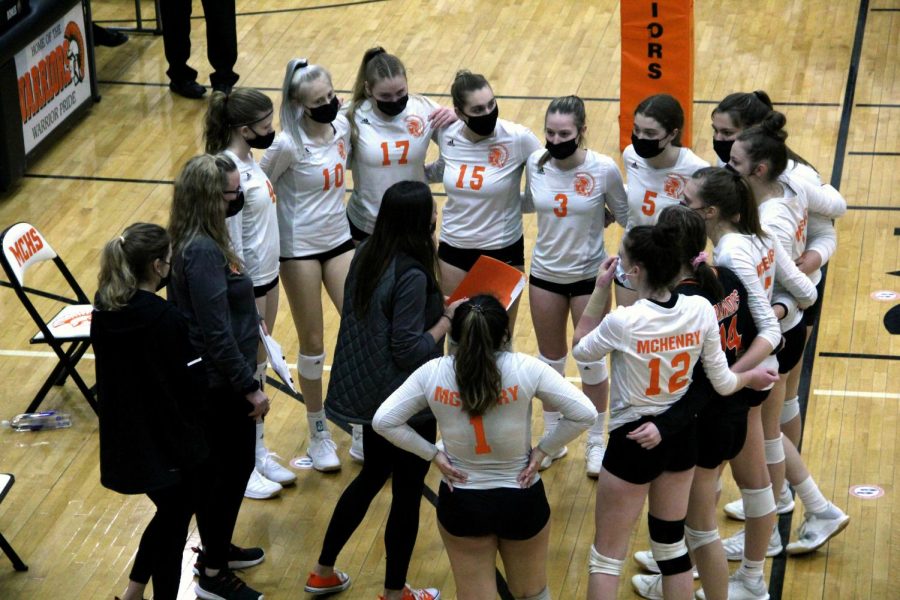 The varsity volleyball team meets mid-court to strategize during a game against Johnsburg on March 24 in the East Campus main gym.

MCHS’s volleyball teams have worked very hard to produce a successful season. The players are so excited to be back and to even have their season after waiting since the IHSA paused athletics in the fall, but the changes to the season left a hole that they can truly feel.

According to the MCHS’s website, the freshman team is undefeated, and the varsity team is very close with only having lost two games. Regardless of record, each team has been dedicated to their season.

This season is very different from all previous seasons, due to COVID guidelines. For example, every player and person in the crowd has to wear a mask at all times. Luckily all the girls are so happy to have a season many don’t seem to mind it.

“They never complain about their masks, or how tired they are,” said Kaley Freund, the girls volleyball sophomore coach. “They show up, work hard and us coaches are so grateful to have such a solid group of athletes.”.

While it still isn’t the same as before, they are all putting in the work and in some cases working more than ever before. “We want to prove that we can still compete even though times are different,” said Kendall Krumsee, a sophomore volleyball player. “This season has been very different from other seasons, but even in spite of everything that this year has brought us, the team will always find ways to pursue greatness,” said Ava Perrone, another sophomore volleyball player.

For most players keeping that positive attitude has been no easy feat. At the games, normally the players have fans to help spread the cheer during a tough game, but this year they haven’t been able to have many fans in the stands.

“The atmosphere of the games has been quite quiet as we are not allowed to have many spectators, only two per player, so we do our best to cheer loud so that everyone is excited to play,” explained Molly Hobson, a freshman player on the varsity team. Since there are very few people allowed to come to the games, the players have to cheer for their team louder than ever.

Players and coaches are working harder than ever to create a positive atmosphere during these difficult games. According to Alexis Wilde, a freshman on the freshman B team, the atmosphere has been very positive, and they all support each other and even the older tiers have been supportive.

“The atmosphere at games is positive,” described Cooper Ten Bruin, a sophomore volleyball player, “but it will never be the same without a student section. Even at our games for the freshman team, students went and the atmosphere was so hype and it brought up the team. Even for varsity being able to stand in the student section and scream for them was the best thing ever.”

All of the players have felt the positive atmosphere at the games, but are in agreement that is and won’t be the same without a student fan section. The student fan section adds excitement to the games and keeps the players positive during difficult games. Without the section that role has fallen on players and few fans to make sure that morale is high.

Another huge change with this season has been the level of social interaction throughout the games and practices.

“Starting with interactions with other teams, we don’t have any. COVID teams would shake hands before and after every match and there would be captains meetings before the game to decide who had to serve or receive. Now automatically, the away team gets served, you stay on your side of the court at all times, and you do a simple wave to say good game to the other team” explained Ten Bruin. With not having a lot of social interaction between teams it can leave the players feeling like a peice of the game is gone, which in return can slowly bring down morale of some players.

The morale of some players have not been the same as previous seasons, due to all of the differences. According to Ten Bruin, student athletes in all sports, not just volleyball, are tired. With school and sports it can be draining but especially this year with trying to cram as many games as we can into a smaller season it can take a big toll on student-athletes. Even though there are so many positives from this season, some of the players have still felt the negative effects of the changes in the season.

While pushing and working through this difficult season, every team has reached success in some shape or form. Although the season has changed a lot overall the players of all teams are glad to be back.