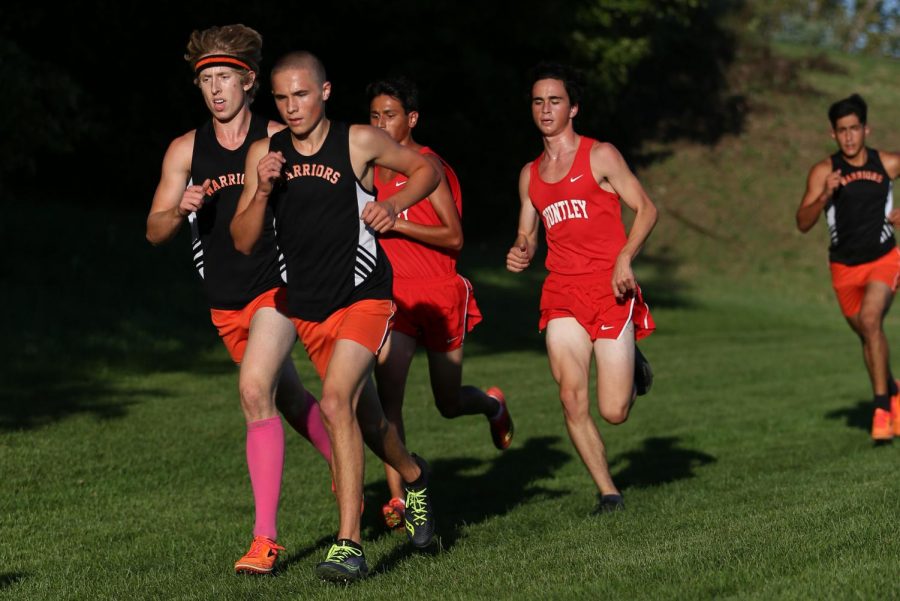 Junior Caleb Schopen and Seniors Ian Knebl push ahead of their Huntley opponents during a cross-country meet on September 24 at McHenry Township Park.

The boy’s varsity cross-country team came home from Plato Park in Elgin with a conference championship, and continue their undefeated streak as Regionals approach.

With the cross-country regular season closed, the Warriors find themselves undefeated in conference as the state playoffs begin. Having already won the conference championship, the team has their sights set on running their way to Peoria to compete for a state championship.

Kevin Horst, boys varsity cross-country coach, can’t single out any standout runners for the boys this season. “Their strength is in their pack mentality and selfless attitude,” he says. “So it really is a whole team effort.”

The team has accomplished what few varsity teams from McHenry have been able. “The boys team went undefeated [in conference] this year, as well as in 2014,” he said. “Prior to that it had been since 1983.”

Horst has been coaching for four years at MCHS, but previously coached cross-country at McHenry Middle School. “This year’s senior class has some athletes that I coached for seven straight seasons,” he said. “It has been rewarding to be a part of their journey for so long.”

Caleb Schopen, junior runner for the varsity team, has his own strategy to stay focused during the race. “Music is a huge part of my life, so I always listen to music before a race,” he say. “Somehow I always find myself with a song stuck in my head. I try to keep my breathing and my paces in the same tempo as the music.  It helps take my mind off the pain even if it is only for a second.”

The team has implemented a new practice schedule and style for this season in which the runners have seemed to buy into. “It has been fun to see our team progress to the next level,” says Horst. “In September we elected to meet in the evening instead of after school for a few practices due to the heat, [and] I think that was a turning point. Doing the workouts as darkness fell was a lot of fun. the team was really motivated to do those workouts.”

Carlos Montes, junior runner for the boys varsity team has high hopes for what the team can accomplish as they approach the most important races yet. “Going into Regionals and Sectionals, our team has had the goal of representing McHenry at the State level since 2017. Our varsity group hasn’t really changed at all since my freshman year, so it would be really cool to see our team grow from a group of freshman and sophomore guys running on varsity, to a state qualifying team.”

For the girls, the future looks bright as sophomore Lydia Zancho makes her name for herself as one of the better runners in the area. Zancho finished 3rd in the Fox Valley Conference Championships this weekend at Plato Park in Elgin.