Bulls seeing red during first half of the 21-22 season

Because of new coaches and players, the Chicago Bulls are now true contenders in the NBA 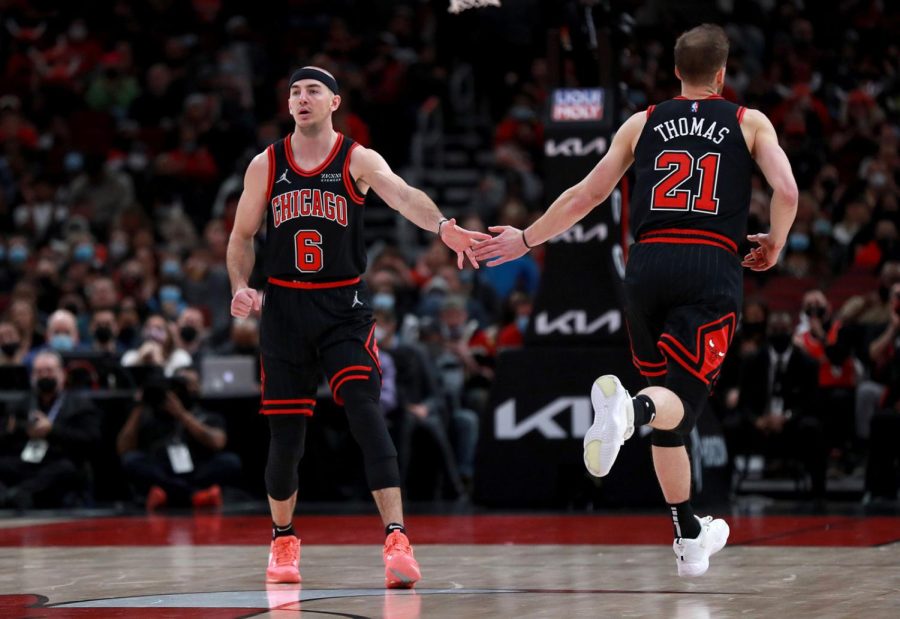 Chicago Bulls guards Alex Caruso (6) and Matt Thomas (21) celebrate after a basket by Thomas in the first half against the Cleveland Cavaliers at the United Center on Wednesday, Jan. 19, 2022.

A Chicago Bulls fan is sitting down watching the end of a tie game with 20 seconds left on the shot clock. Bulls players Zach Lavine and Demar Derozen run the offense and pass the ball around. Five seconds are now on the shot clock as Demar Derozen dribbles around a defender and scores the game winning shot for the Bulls, the stadium goes crazy and the Bulls fan is happy knowing that it is just another win for the Bulls in their remarkable first half of the 2021-2022 NBA season.

The Chicago Bulls have started the first of the 2021-2022 NBA season with a 30-18 record, which is second in the Eastern Conference of the NBA and 5th overall in winning percentage in the entire NBA.

A majority of the Bulls success has come from new additions added in the offseason, as well as late last season, with new head coach Billy Donovan and new star players Nikola Vucevic, Derozan, Lonzo Ball and Alex Caruso.

The Bulls record last year through 48 games was 19-29, their turnaround season can mostly be blamed on Head Coach Billy Donovan, who previously coached the Oklahoma City Thunder since 2015. Donovan doesn’t want all the credit though. He says most of the team’s success has come because of star player Zach Lavine.

According to the NBA.com, Donovan said, “He is the ultimate team guy” he really is. He tries to play the right way. He realizes there is more help around him than he has had…he just plays the right way. He’s a great teammate, he’s a great guy, he wants to win and do the right things.”

This season Lavine is averaging 25.0 points per game and is a huge reason for the Bulls turnaround this season, but the bigger story of the Bulls is the resurgence of Demar Derozen, a 32 year old veteran and 4 time NBA all star. Derozen went from a struggling San Antonio Spurs in a mentor role to their young players into an all star starter on the Bulls.

According to the NBA.com, Derozan sai,d “I’ve been a big advocate all my life. I’ve been a student of the game, I always measured players’ games off their work effort and heart. That’s something that analytics could never measure… I never wanted to stray away from [being an all star]. It was tough, hearing from the critics, the criticism about your game, this, that, this, that. But I just stayed true to myself, and this is a true testament, moments like this, to players everywhere.

In the upcoming weeks, the Bulls have a favorable schedule with some tough matchups against the number 1 team in the NBA, the Phoenix Suns, on February 7th as well as contending teams such as the Memphis Grizzlies, Miami Heat, and Milwaukee Bucks in the upcoming month. Billy Donovan has high hopes for what his team may be able to accomplish this postseason.

According to Heavy, Donovan said, “I do think this is sustainable, but listen once you get into the playoffs and are fortunate to play in the postseason, it’s like one team versus once team, and that’s all you’re focused on.”

The Bulls fan sits down the next day to watch the Bulls next game and as the game is coming to an end it is a blowout, as the final buzzer sounds for the game the Bulls pick up another win in hopes for a championship for the 2021-2022 NBA season.