The McHenry Messenger • May 12, 2021 • https://themchenrymessenger.com/class-of-2021-to-graduate-in-small-in-person-ceremonies/

Class of 2021 to graduate in small in-person ceremonies

Though the ceremony will look different, the school hopes to turn last year’s senior parade into a new tradition 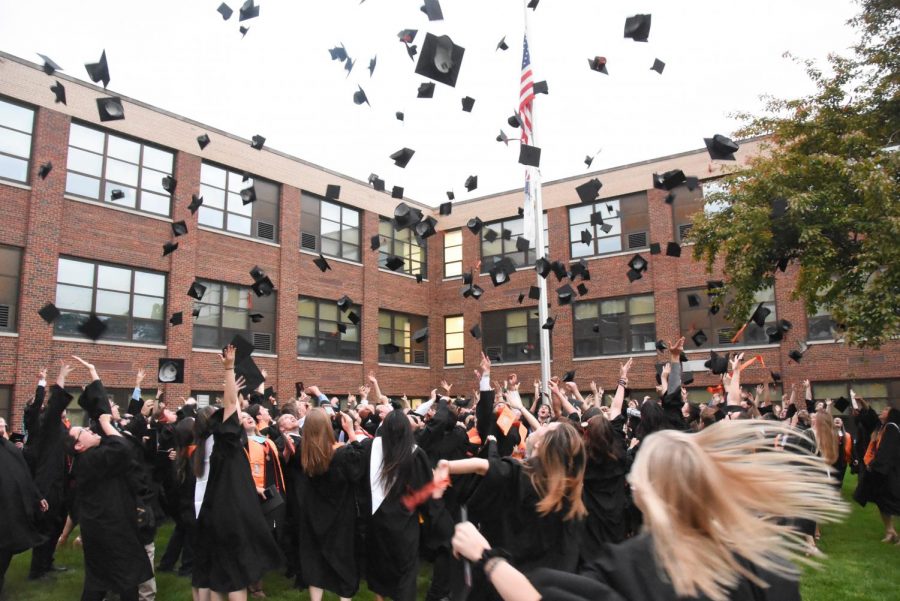 The class of 2018 celebrates following their graduation at East Campus. Because of COVID, cherished graduation traditions have been canceled or adapted to accommodate social distancing, but new traditions, like the senior parade, have been added.

Graduation for the class of 2021 will be held on May 20 and 21. Ceremonies for East and West campuses will be held separately in their respective Main Gyms.

East campus will have three graduation ceremonies on May 20 at 5, 6:15 and 7 p.m. in the Main Gym. Seniors will graduate in groups of 50 graduates and each will be allowed to bring four guests.

“I think it was the best way [to have graduation] because it was the safest way. We’re able to follow CDC and the Illinois Department of Public Health guidelines,” said Jeff Prickett, principal at East Campus. “We entertained the idea of going out to McCracken Field like we have in the past, but one year I got caught in the rain out there and we had to move all the graduates to Duker and I’m not doing that again.”

“The other issue is that, if we were to go out to McCracken Field, we would be facing one set of bleachers,” continued Prickett. “We couldn’t fit all the guests [in the bleachers] if we did. We’d have to limit it to two guests per graduate to be able to safely social distance all the guests on one side of the bleachers.”

“It’s going to look pretty similar to what the traditional graduation looks like in that everything will be set up,” said Marsha Potthoff, West Campus principal. “The 25 students will be seated, on the gym floor, and we’ll still have a student welcome a speech, we’ll play the song when they march in, I’ll give a little address, their names will be read, they come across the stage. So it’s going to look the same for that back room.”

Seniors from West will graduate in the Main Gym in groups of 25 with each graduate allowed a maximum of five guests.

“I think it makes [graduation] more memorable, and even last year, we had a virtual graduation, and we did the individual in person [graduations],” said Potthoff. “I don’t think hardly anybody watched the virtual graduation. It’s just not the same. And so I hope that the seniors feel it’s more, more like a grand finale, and a positive memorable experience than watching something on a screen.”

“We had never done [a parade], until last year,” said Potthoff. “Last year we were searching for ways to honor students, and we came up with that idea, and we said, ‘wait, why not continue to do that even if we go back to traditional graduations.’ It was just really fun, and it’s a little bit more casual than a formal ceremony.”

While many seniors have expressed excitement about being able to have some semblance of a traditional, in-person graduation ceremony, other seniors are still grappling with disappointment that comes with these dramatic changes.

“The way the school is doing the graduation makes sense in terms of the pandemic but as a senior I don’t feel like I’m being given my fair recognition for working as hard as I have for the past four years,” said Salah Kigozi, senior at West Campus. “Like a 30 minute ceremony it sounds like something so meaningless. I do wish I can graduate with my friends and the people I know and have worked with for years but I don’t and that wont be something I’ll just get over.”

However, seniors are remaining optimistic and trying to make the best of the untraditional aspects of graduation.

“I think they are handling it to the best of their abilities,” said Stormy Mosson, East Campus senior. “But I still wish it could be different and not so rushed.”

“I feel somewhat disappointed that I don’t get to graduate with my whole class like the class that graduated two years ago,” said Kylie Borck, West Campus senior. “But I’m very grateful that at least I will get a ceremony with a few other friends, unlike last year where you just go in, Potthoff would say something about you, grab your diploma and you’re out.”

Graduation for the class of 2021 has been a long anticipated event after all the challenges that students, parents, teachers, and administrators have faced through the pandemic. Having an in-person graduation, although untraditional, is exciting for many at MCHS.