Players, fans, and performers have waited two years for the first home football game of the season—and each brought their all 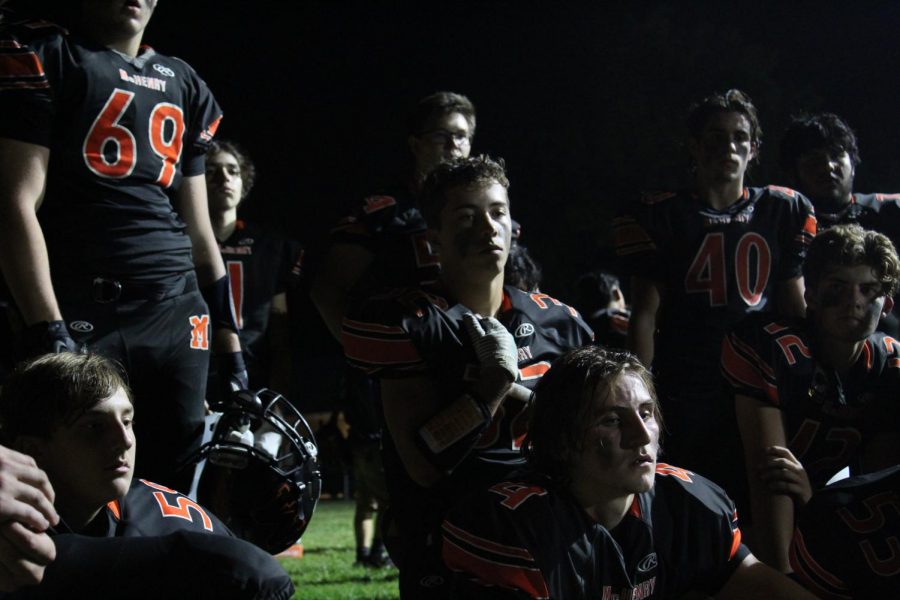 The varsity football team meets in the shadows behind the stadium during halftime at the first home game of the season on September 3 at McCracken Field.

As Dominick Caruso ran through the inflatable Warrior helmet onto the field, the crowd roared, awaiting the first home varsity football game to start, screamed with excitement and anticipation for the game. The players prepared to face the opposing team and focused on getting into the zone of the game.

Going into the second game of the season, many football players took previous lessons learned with them. “I learned to stay true to my technique,” explained James LaRose, “and to not forget about what we’ve been practicing for all summer long.”

Along with anticipation for the game, many envisioned the crowd during the first home game being even more energetic than ever due it being the first game at McCraken with crowds since COVID regulations have loosened.

“I think this will be one of the loudest games ever at McCracken Field,” explained Zunkel. “The student section is going to be as wild as ever before, especially after fans finally being able to come to the games because COVID restrictions have loosened up. Also the theme is U.S.A., so how can you not get loud for America?”

The crowd worked all game long to fire up the football team, chant, and cheer the team after their big plays.

“The energy of the game was crazy,” described Kayden Shatzer, a senior who runs Warrior Nation, “probably the most hyped I’ve seen everyone get in my time here at MCHS. That touchdown in the 3rd quarter turned our fan section into something that I had never seen before. The whole place just went insane because we legitimately had a chance to beat a team that used to drop us by 40-50 points in the past.”

Along with cheering on the football team, the crowd went crazy for the performances at the game, including those by the cheer team, the dance team, and the marching band.

“I enjoyed the excitement that was there and everyone cheering for us when we did something, like our standing tucks,” varsity cheerleader Destiny Turner said.

During half time, the dance team performed one of their routines on the field, which they were able to do once last year due to COVID-19 restrictions.

“All of our practices leading up to the game really paid off, and the crowd seemed to love our halftime routine,” explained varsity dancer Victoria Sorenson.

While the dance team performed, the football team strategized how to come out of the game with a win. “We need to get a lot of completions, we need Brody Hallin to start running that ball, and really working our offense down the field,” Kyle Kaempf said during halftime. “We only go three points right now, so get one in the endzone that would be really good. Our defense has been solid so we got to keep that up.”

Most players during halftime hyped each other up, to build confidence in themselves going into the second half.

“I am feeling great and feeling confident,” LaRose said after halftime. “Some mishaps on special teams but we’ll be good for the next half.”

What LaRose called “mishaps” turned into lessons that the players took away from the game.

“I learned that sometimes in life you come up short, even though when you give it your all,” Joesph Crowley said. “Also I think we are gonna take in more focus, make sure we plan on that game plan a little more and make sure that we focus directly on friday night one-hundred percent.” .

The first home football game ended in a loss for the varsity team, the second of the season, but the crowd, performers, and the players all made the absolute most of the game. For a lot of the seniors at MCHS this was their last home game ever, making for a very special to the athletes, performers, and crowd members. But win or lose, they all will remember this game after high school.