The McHenry Messenger • May 12, 2022 • https://themchenrymessenger.com/committed/

A number of student athletes from MCHS have already committed to a college or university, where they hope to continue playing 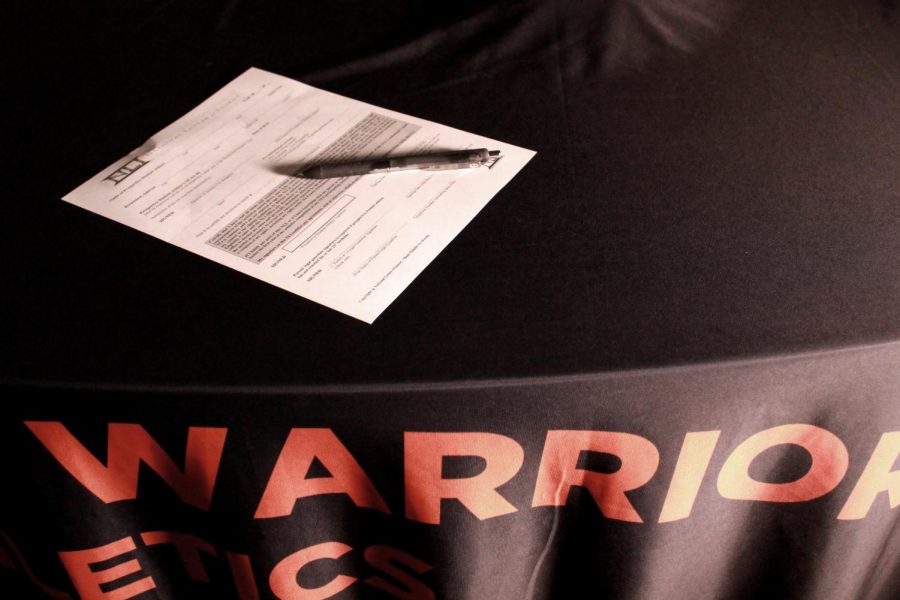 It doesn’t matter what sport an MCHS student plays. There’s a good chance that, if they excel, they will be noticed by a scout and recruited to play in college. Some might even be offered scholarships.

The paper is placed on the table in front of the newly committed athlete. When they look up, a crowd of supporters are celebrating their accomplishments. As they sign the paper, their hand shakes with anticipation and excitement for this new chapter of their life. But, for now, they get to celebrate with their classmates, coaches, teammates, family, and administration their accomplishment.

No matter what college, sport, major or location, the athletes that work hard enough have earned their opportunity to play in college. MCHS does this by hosting an NCAA signing at Upper Campus, which they have done since Athletic Director Barry Burmeister has been in office. Burmeister believes that it is important to celebrate all the committed student athletes no matter what division they are now in.

“When I first started celebrating NCAA National Letters of Intent signings, we only included Division I and Division II signees that were receiving scholarships,” described Burmeister, “After a few years, I decided to include as many athletes that were signing no matter what level of college or university that they were committing to.”

Not only does the signing celebrate warrior committed athletes, but it also shows and celebrates the hard work of the people that helped them get to where they are. For example, some coaches play a large role in helping student athletes commit to where they are believed to belong.

“The Athletic Department plays a big role in athletes committing to schools,” explained Burmeister. “The various schools reach out to us year round to see what athletes have the potential to play at their schools. We make sure that the student athletes are taking the right classes and have passed the NCAA clearinghouse if so required, working with the Guidance Department.”

“Coaches are in constant communication with college coaches year round,” he adds, “and once a student/athlete shows interest in a school, the athletic department and coaches work with the schools to answer any questions or concerns about academics, athletics or character of the athlete.”

For many of the athletes, the commitment process is very different. Some of the athletes are scouted by college scouts at their game. For example, Isabel Bersie, a varsity lacrosse player, has committed to Lake Forest College with an, athletic scholarship and will be majoring in kinesiology or physical therapy.

“Last year, I was scouted at my third game,” Bersie says. “Just from there on talking was going on for a while.”

Some of the players earn scholarships to schools through past relationships that they have created, such as those with past or present coaches.

“I know the coach because he used to be my travel coach,” explains Kaden Shatzer, who committed to play basketball at College of Lake County and plans to major in secondary education. “Then he rose through the ranks and became a coach in college and Lake County. He gave me an offer and told me that it would be on scholarship.”

However, for athletes that do not have either of these, they apply to colleges and universities through videos in order to obtain scholarships or offers.

“We use the site called Field Level,” says Alyssa Franklin, who is committing to Milwaukee Area Technical College for basketball and plans to get associates in science. “We made a highlight video for me, and then coaches can go in and view it. The college coaches will search, for example, forwards in Illinois, and then my profile came up they viewed it. Then they call me and have a conversation with me, and tell me about the scholarships and what majors their college offers. From there, you kind of make a decision on if you should [consider] the college or if you should put it on your waitlist.”

“If they’ve seen you play games before, [they may start] texting back and forth,” explains Gavin Micklinghoff, who is committing to Carroll University for baseball and planning to major in business. “Then eventually if you are interested and they’re interested in you then you just decide.”

Just like the commitment process is different for many athletes, the time frame of athletes committing is also different as well due to many conditions which can make the process difficult for students to manage.

“It was long,” says Katrina Calabrese, who is committing to play volleyball at Roosevelt University and planning to major in cybersecurity. “It was frustrating. And when I was trying, basically all schools were not looking for anybody. So I was just kind of stranded.”

Many of students took location into play when deciding which college they wanted to go to.

“I really fell in love with how the campus looked,” says Bersie, “and like the atmosphere provided along with just the city in the town being close to it.”

For other students, it was important to them to have the right location and to know the people who will also be going there.

“I like the campus,” explained Micklinghoff. “It was like the perfect distance from home —  like not too close but like, it’s not like an eight hour drive or anything. I got along with the coach very well, and I got a couple friends going there as well.”

For every athlete, the commitment process and journey means something a little different, but no matter what every athlete has a chance to be celebrated by our school. These athletes are always celebrated by MCHS for their hard work and dedication.