Con: Valentine’s Day brings out the worst of love

Couples should show love and affection for one another every day, not just on Valentine’s Day 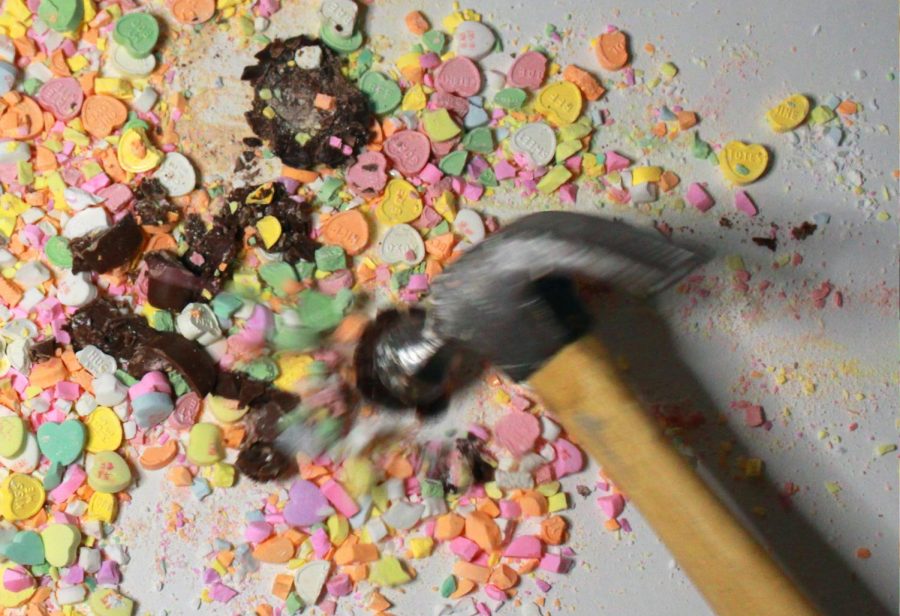 Valentine's day is a holiday surrounding the idea of love and affection. Though, it might not spark the same feelings for everyone.

February is known more for its hearts, cheap chocolate, and flowers that die the next day than romance. Valentine’s Day is cute, don’t get me wrong, and most people whether in relationships or not don’t want to feel left out gift-wise.

For some people in relationships, Valentine’s Day is the only day that they show affection, just so they don’t appear toxic to others. There are many problems additionally that this holiday holds, such as the pressure to buy a gift for a person’s significant other, the stigma around them and their contentment in their relationships if they don’t, and just simply how obnoxious it is to see increased levels of PDA in the hallway (if that’s even possible) covered up by inconveniently-sized teddy bears.

Valentine’s Day should be an excuse to spoil a person’s partner, not an excuse to treat them with the bare minimum that is usually expected in a relationship. No matter the situation, a gift is most likely appreciated. Whether it is a money issue or something bigger that a person is unable to show their love in materialistic ways, love and affection should be established daily. Couples do not even have to spend any money on their significant other on Valentine’s Day. Making something is much more sentimental and from the heart anyway, and the person on the receiving end would probably cherish it more than something store-bought.

There is a stigma that people in relationships have to go all out on the holiday, and although this is true for some couples who can do so, it doesn’t necessarily need to be the case. If they do not like the holiday or don’t do a lot to celebrate it, or even nothing to celebrate it, they are unhappy or unhealthy and should just break up. Some couples do not see the significance of the holiday, because they are actually very healthy and happy and love each other every day.  It doesn’t mean they wouldn’t celebrate it no matter what, but they recognize that they do not have to.

There is no written rule they are required to spoil their partner on this day. Perhaps they choose to do it another day. Valentine’s Day is a bit of a sham because time is not real and should not dictate whether or not or how much love to show a person’s significant other. Not liking or celebrating the holiday doesn’t mean the couple is no longer in love, but rather they don’t feel the need to express their love to each other by spending money.

Couples should not feel pressured to celebrate Valentine’s Day simply because of stereotypes. Whether they do or do not is no one’s business but their own. Valentine’s Day is overrated and is easily taken advantage of, and also causes an argument between some couples if they do not get the other anything because of those stereotypes that they should or have to. Single or taken, Valentine’s Day is something that should be personal to people, not something to make a huge, public deal out of.