After two years of campaigning, planning, and constructing, West’s new addition is open to math and science classes 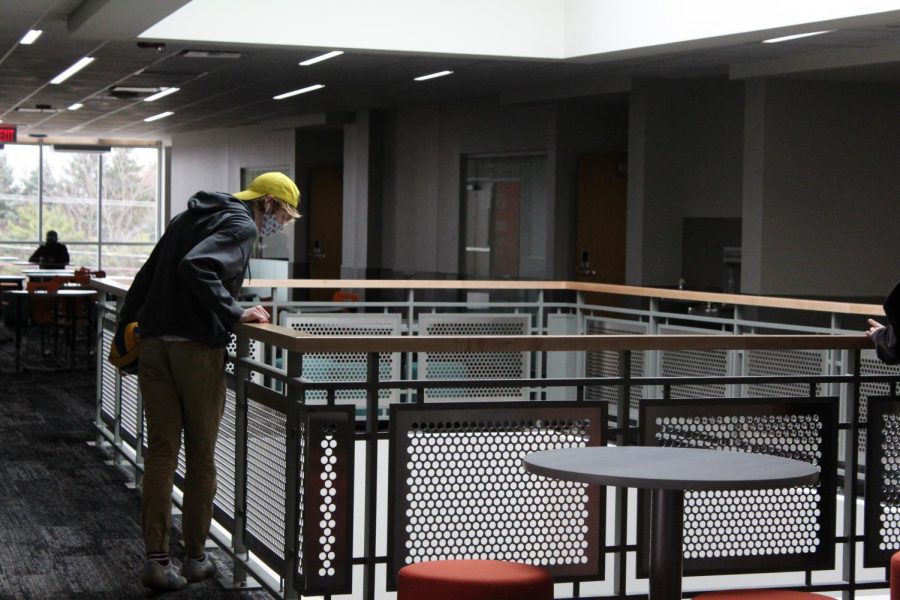 A student looks from the fourth floor to the third floor of the new extension at West Campus on March 22. Called the Center for Science, Technology and Industry, the space accommodates math, science, CTE, and communications classes.

The new Center for Science, Technology, and Industry at West Campus opened on March 22, allowing students and teachers to begin having math and science classes in the extension.

“I think [the extension is] pretty cool,” said junior Kristina Robinson. “I think itf demonstrates what the school’s capable of. It just adds a lot of new resources and technology.”

Of the three levels in the 70,000 square foot extension, only the 300 and 400 levels are opened to classes with science courses on the 300 level and math courses on the 400 level.

“We have nine math classes [on the 400 level], or the entire [math] division of all levels,” said assistant superintendent of curriculum and instruction Carl Vallianatos,”and then on the 300 level, the science classes that we moved this year, we had to move because of some of the interior construction.”

The science classes currently in the Center for Science, Technology, and Industry are the classes that were previously held in rooms 215, 217, 321, and 323. This will allow for Phase Three of the construction projects to begin, which will focus on the remediation of current spaces within West Campus. These projects will include a new college and career center along with a choir room, art rooms, and quiet room.

“[We’re going to be starting] a brand new, $900,000 College and Career Center that’s going to be right by the library on the 200 level,” said Vallianatios. “The College and Career Center was something that two years ago we weren’t even thinking about, but we were able, each phase of this project came in under budget to the point now where we could do some really cool things on the interior of the building.”

The 200 level, which will house all the Career and Technical Education (CTE) classes, is still under construction and will not be completed for another 5-6 weeks. The classes that will move into the 200 level will be classes like communications, engineering, business, incubator, and computer science.

“The 200 level, which is going to be a wonderfully different level than the other two,” said Vallianatios. “It’s going to have all the CTE careers courses in it [with a] bunch of advanced labs.

“I think [the extension is] great for students, especially the second floor that you haven’t even seen yet,” said Emma Theel, West math teacher. “I think that’s going to be awesome for students that are in the career and technical path. There’s lots of room and equipment and new stuff that they’re gonna be able to do down there.”

Many teachers are excited by the opportunities, features, and experiences that the Center for Science, Technology, and Industry will provide to students.

“I think it’s pretty cool,” said Matthew Adam, another West math teacher. “It’s kind of like college, especially the set up of the rooms are kind of similar, so you can always jump in and jump out and you know where everything is and how everything is going to work.”

“I am extremely excited about the opportunities for student learning in the new Center for Science, Technology and Industry,” said West math teacher Stefanie Lukas,. “Teachers were involved in the design process for the new math classrooms and it has been amazing to see everything we discussed come to fruition. The collaborative nature of our classrooms has been elevated with more student space to think, process, and develop their math skills on a daily basis.”

“I think that the new center is super amazing,” said West science teacher Theresa Lichon. “It’s nicer than some college campuses, and specifically for science, it has so much room and new things for students to use that will help like learn more advanced science, like the labs are just amazing.”

Teachers are not the only ones that have been enjoying the new spaces within the Center for Science, Technology, and Industry, students have also enjoyed learning in the new spaces and discovering all the new possibilities that will become available to them.

“It’s cool to have a new environment, to be in new classrooms, and have a new look,” said junior Maylee Martinez.

“I think it’s a lot better and it’s a lot newer,” said freshman Frederick Richter. “I would say that it’s really awesome.”

“Having classes in the wing [has been] very nice,” said senior Michael Nocks. “[The space is] very well acquitted for students and overall just very open [with] a lot of natural lighting”

“Now that we have seen the new classrooms and common spaces, I am beyond excited to think about the future for our students in McHenry,” said Lukas. “I have always been in support of the campus transition that will begin next year because it will remove barriers for students wanting to take classes that used to only be offered at one campus or are only offered one period per day.”

The extension will provide the space required for this transition to be successful and it will also provide students with more equal access to more advanced classes in the CTE field.

“I think that all of these are good things for us especially because the new wing allows for equal access to classes before some classes were offered only at West or at East and kids wouldn’t take them because they didn’t want to travel,” said Lichon. “So I think it allows more opportunity, and everyone gets to experience those classes with the same high tech, fancy equipment.”

“It’s a very good addition to the school,” said junior Morgan Pappas. “I think it opens people’s eyes for new courses and makes them want to have classes up here.”

Despite the long process that led up to the opening of the Center for Science, Technology, and Industry, the soft opening to the extension has been rewarding for everyone involved.

“It’s been a long two year planning process, and it’s been amazing that we’ve literally had about 16 different groups of teacher user groups, putting in all of their input. It really started as just ideas,” said Vallianatos. “What’s been different about this project is instead of just building 15 or 20 new classrooms, we have built everything from general classrooms, like on the math floor, to advanced science classes, a new concept for chemistry classes, and then all of the CTE advanced lab. Each and every single one was different.”

“And to be able to see students walk into those rooms for the first time and have their eyes light up, knowing that it was really a two year planning process of multiple meetings between teachers and the architect, making the design reality [has been rewarding],” added Vallianatos.