Boys cross-county team steps it up at State

Despite their final ranking at State, the teams credits their "wolfpack mentality" for their successful season 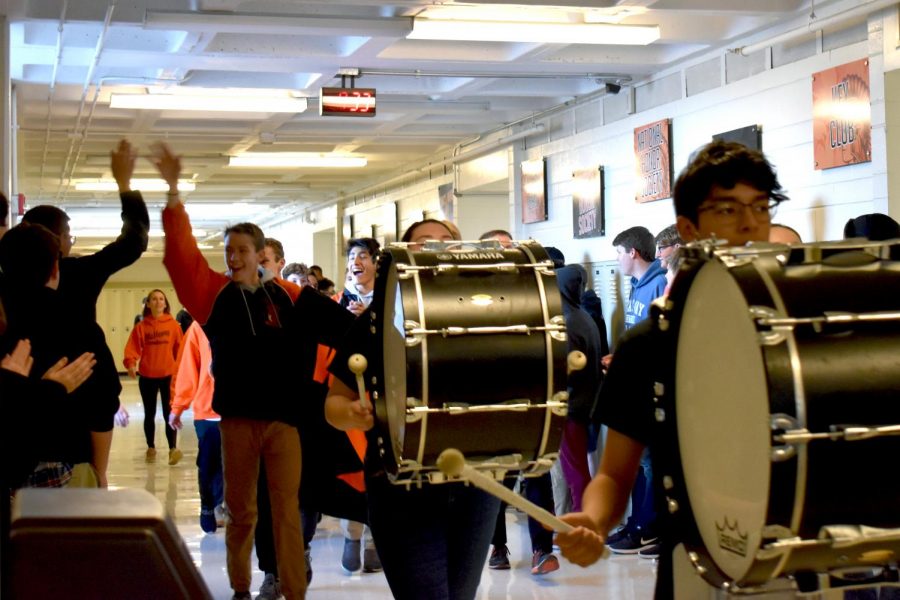 Will Puls hi-fives a classmate as the varsity boys cross-country team parades through West on November 8 led by the Marching Warriors drumline. The team drove to the State final cross-country meet immediately following the celebration.

On Saturday, November 9 in Peoria, the MCHS varsity boys cross-country team finished 20th out of 25 teams in the IHSA State final meet.

Though the outcome may not have been as positive as many would have hoped for, the team enjoyed it while it lasted, soaking in the experiences that the state championship was able to bring them.

Ian Knebl, senior runner for the boys cross-country team, completed the final race of his high school career, and was named the team MVP for this season.

“The opportunity to compete with the best runners in the state was almost like a dream come true,” he said.

No matter what obstacles the 2019 season seemed to throw at the team, they were able to stay focused on what they call their “wolfpack mentality” in order to compete at an elite level.

Junior Caleb Schopen has stressed this idea multiple times, and he believes he can attribute most of the team’s success to this mindset.

“The feeling of the wolfpack mentality we developed will never leave me,” he said. “Whenever someone had a bad race the other guys would step up and we had confidence in our team that I’ve never felt before.”

As far as the race is considered, MCHS came up short, but they are choosing to learn from their mistakes instead of dwelling on them.

“We can definitely learn how intense the competition for the meet is,” Schopen said. “If we make it back next year we’ll set more manageable goals and make sure that everyone can perform at their peak to get the result we want.”

The team made good use of their time in Peoria while they weren’t racing, they messed around at Big Lots, and stocked up on snacks for the long ride home.

Instead of boasting their own accomplishment of making it to the state championship, the team has been humble throughout their entire run. Schopen even cited another runner’s performance as one of the coolest things that he was able to experience throughout the weekend.

“Josh Methner from Arlington Heights was able to beat Craig Virgin’s 40 – plus year old record on that course,” Schopen said. “To be sharing the same race as the runners I’ve idolized for my running career is a dream come true.”

The varsity team will have to wait until next season to race again, but the future looks promising with plenty of young talent set to return for the 2020 season.