Essay: Once an Eagle, always an Eagle

In the past year, five MCHS students have earned the Boy Scout rank of Eagle by giving back to their communities — with more to follow 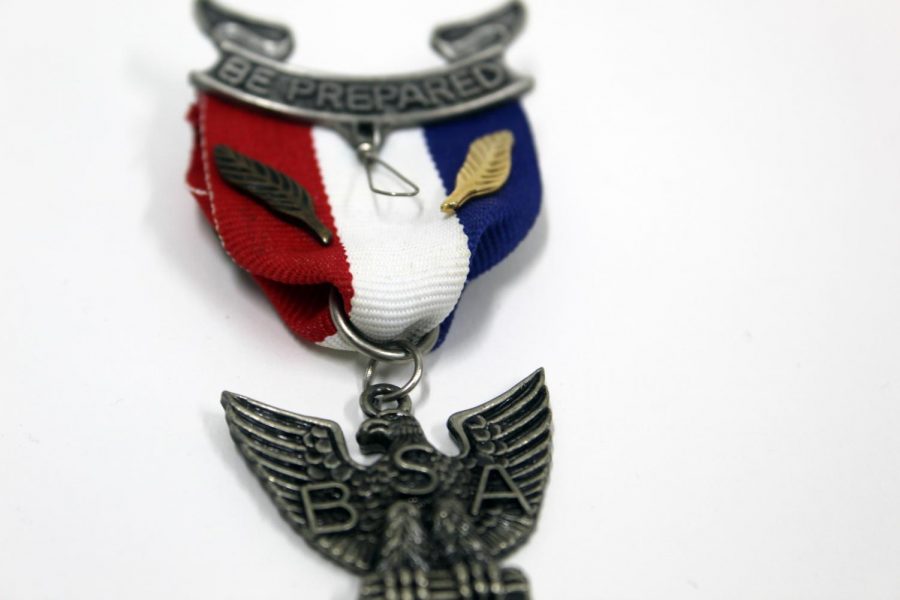 The rank of Eagle is the highest a Boy Scout can earn. Many MCHS students have received the rank over the years, including five in the past year alone.

Becoming an Eagle Scout is one of the most important and highest awards a person can earn in the Boy Scouts of America. Out of all 130 million scouts, since its inception in 1911, only 4% have earned the rank of Eagle, a challenge of one’s determination and grit to accomplish Scouting’s highest honor.

In just the past year, five students from MCHS have earned the rank of Eagle with two more actively working on their Eagle Projects. This may seem like a low number but, when considering we are all from a troop of 20 scouts with 4 more Eagles from other schools,  11 scouts in total will have earned their Eagle, beating out the national average of two out of every 10.

To add to that, all of this happened in one year — and all during a pandemic. Notable Eagle Scouts from MCHS include Lazlow Ziebel, Ryan Kostelnik, Phil Harris, myself, and Dakota Owens, who is currently working on his project.  All of us went through our projects with the ultimate goal of giving back to our community. Each of us picked an organization that would have a direct impact on those that we knew were in need in some way. We all led a group of volunteers and all donated our time and effort to the pure benefit of others.

The saying goes, “once an Eagle, always an Eagle.” Eagle Scouts take pride in this fact. Scouts must delve through various principles taught by the BSA and demonstrate a build up of knowledge, leadership, and character to complete the final requirements to achieve the rank of Eagle. Scouts are required to demonstrate how to be an effective leader, hold leadership positions in their troops, leading their peers and eventually reach their final requirement, the Eagle Project.

The Eagle Project tests the few who make their way to the top on their leadership capabilities. Designing a project, earning funds to buy materials and gathering the supplies and workers needed to put every skill they have learned so far into action. Over what normally takes about a year, Life scouts plan, organize, lead, and manage their projects. A direct model of the responsibilities of a professional project manager. All before the age of 18. Most importantly, these Eagle Scout Projects are designed to aid a non-profit organization of the community. All funds raised and time worked are free of charge to the beneficiary. These projects are done out of pure servitude to the community of Mchenry.

Ziebel’s Project was designed to help local veterans in our area. He led a group of volunteers to make “appreciation boxes” full of food, toiletries, and necessities to struggling veterans in McHenry through the American Legion post 491. All items were donated by the people of our community. Ziebel states, “I’ve had a lot of veterans in my family … it felt right to give back to the people defending our great nation.” Ziebel’s goal was to create 25 boxes. In the end, 78 boxes were donated in total. His project had such a large lasting impact on McHenry that the post brought in more recognition, added new members and fed hundreds of local veterans.

Kostelnik’s Eagle Project entailed building a map kiosk for Moraine Hills State Park. Kostelnik contacted the park and saw a need for a kiosk near the entrance of a frequently walked path. His goal was to, “give back to the community in a positive way.” This project helped save Moraine Hills staff money on workers, materials and time so they can focus their efforts on other areas of the park. Thanks to Kostelnik, Moraine Hills got a brand new kiosk that was badly needed for all the people who enjoy the park.

Harris’s Project helped out distressed families in need inside and outside of McHenry. Through Faith Acres Church, Harris collected desperately needed items like food and toiletries from the community and shipped care boxes inside and outside the US. His project not only helped people in McHenry but people down in Louisiana and even an orphanage in Russia. Harris’s main goal of his project was to commit his project to a place that, “is doing the lord’s work … by helping distressed families and is something that’s new for me to grow.” In the end, Harris shipped out in total 12, 30-55 pound boxes.

For my project, I wished to give back and help a problem I saw when in middle school. At McHenry Middle School, I saw the special education classes take care of a small planter every week. I noticed how much every student enjoyed maintaining those plants. My main goal was to expand and give them more space and planters for the students to learn and find new passions in the environment by constructing two 6 feet planters for their class. My planters brought more attention to the empty courtyard the planters stayed in and allowed for science classrooms all over the building to learn about and study different plants right outside their classroom doors.

Finally, Owens’s project will give back to local kids in need. Working with the Sleep in Heavenly Peace (SHP) Cary Chapter, Owens will build 5 bunk beds. His aim is to, “make a difference in the lives of individual people.” He knows these beds would ensure a lasting, positive impact on the community. Beyond helping the kids in need, Owens hopes to get SHP name out there. By getting their name out there, the people of the community will hopefully do the same as Owens is, notice, donate and give more to kids in our community that need it.

It is obvious why the rank of Eagle is so prestigious. Just from our 5 projects in McHenry, long term, thousands and thousands of residents and members of our community will be benefited. Now, imagine us five Eagles in every single avenue across America. Now, not just thousands but rather millions would be affected in a positive long lasting way that improves the daily conditions of veterans, children, students, citizens and peers. Although mastering survival skills and leadership abilities is one of the main focuses of Eagle, it is also about developing one’s self through the gift of helping others in need.

All of us have been taught life lessons that we, those around us and those who are impacted from our projects will cherish for years to come. We have learned there is always something, somewhere we can all improve on, to never stop striving towards our goals and maintain our determination for the ability to endear and help one another, the one thing that makes us unequivocally human.