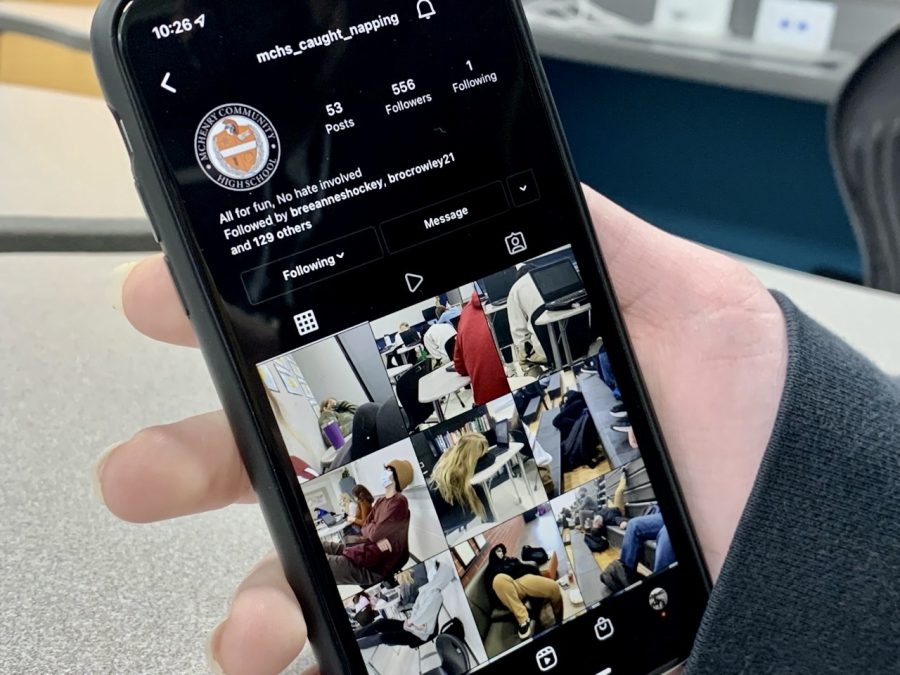 Instagram accounts, such as @mchs_caught_napping, may seem harmless and funny, but also takes pictures of minors without their knowledge and permission in order to embarrass them, which amounts to a creepy invasion of privacy.

A student scrolls through his Instagram feed when he suddenly stumbles upon a picture of himself sleeping in class. He feels embarrassed as other students laugh at him and angry because he never consented to his picture being taken. While MCHS-themed accounts can be funny, they are immature and a violation of people’s privacy.

Some of these accounts are an invasion of privacy as people can’t always give their permission to have these pictures taken. When sleeping, students aren’t able to consent to their picture being posted on Instagram. The pictures can be taken down, however there’s still that period of time where they can be screenshoted and reposted to another MCHS napping account.

Some account seem harmless enough. @Mchs_stallfeet posts pictures without permission, but these pictures are more anonymous, as it’s hard to tell who someone is by their shoes. Another accounts that also deals with the bathrooms — including @Mchs_caught_pooping, which was designed to post pictures of people on the toilet without their knowledge — is an obvious invasion of privacy as kids should not have to worry about being photographed while using the bathroom. Even if the account hasn’t post many pictures, it’s existence can intimidate students and make them uncomfortable.

Lots of these accounts are prime examples of immature high school students. While it started out funny and entertaining with @mchs_bad_parking and @mchsbadparking_, it just kept going. From @mchs_caught_napping to @mchs_badposture_ to @mchs_munchies, and so on. Not only is some of the content is immature — such as pictures of people sleeping, or eating, or using the bathrooms — but so is the rapid spread of these accounts. High school students are almost adults, and should know how to avoid entertaining fellow students at the expense of others.

Some argue that these accounts are harmless and just for laughs, which can be true. Accounts like @mchsbadparking_ are fun to look at when feeling stressed or bored. They also don’t typically cause issues as long as license plates are blurred. Those types of accounts are not a big deal. Accounts that harm others are. People should be able to eat or go to the restroom without fearing that they are going to end up in an immature Instagram account. MCHS-themed accounts are amusing, but only if they are not at the expense of others.

MCHS’s students’ privacy is being taken from them by an Instagram account run by anonymous people in the school. MCHS administrators have responded to these accounts, reprimanding the students who create them and forcing them to delete posts. Hopefully, they can keep up with this trend, as the school has bigger problems to deal with than childish Instagram accounts.