After the violent invasion of the Capitol last week, many realize America may not be so equal after all 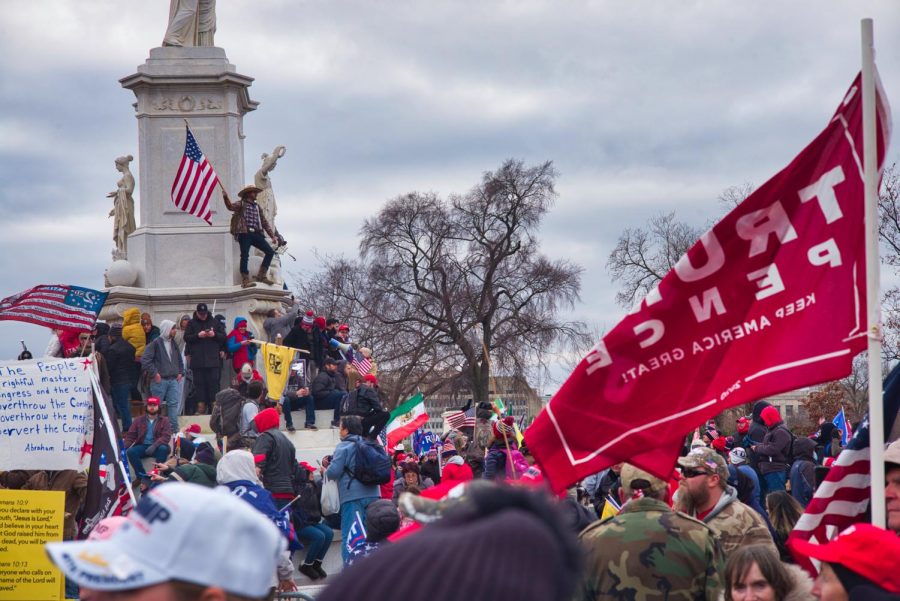 Compared to the peaceful Black Lives Matter protests during the summer of 2020, the Capitol riots resulted in far fewer arrests, reaffirming to the American public that a racial divide still exists in the country.

A Black Lives Matter supporter watches the horrors of the Capitol riots from their phone last Wednesday. As Trump-supporting extremists burst in, they destroy government property, and take pictures joking about the situation. As they watch these horrors unfold, they wonder why first responders aren’t being so aggressive with them? Why aren’t first responders macing them or tazing them? They wonder, why is this being treated better than a peaceful BLM protest? Why is America divided?

On January 6, Pro-Trump extremists stormed the Capitol. These extremists were met with little to no fight and were able to make their way inside Capitol Hill. They caused damage to the inside, looted the building, and injured several police officers. On the flip side, BLM protesters have been holding peaceful protests around this same area during the majority of 2020 and were met with extreme force such as tear gas  and rubber bullets.

Compared to the Capitol insurrectionists, peaceful BLM protesters were treated harshly. “After the death of a young Black man in Washington last year,” activist Makia Green told NPR that “police fired tear gas at protesters as they demonstrated peacefully outside of a police station. Green said they were shot with rubber bullets and that protesters, adults and children alike, were tear-gassed and pepper-sprayed.”

This contrasts the treatment of violent protesters who stormed the Capitol last week. “As more and more marchers streamed into the building to stop a joint session of Congress attempting to certify Electoral College votes for President-elect Joe Biden, the overrun cops stayed frozen in place, doing nothing to stop the insurrectionists,” the New York Post writes about a video shared on Twitter. This contrast clearly shows that these mostly white mostly male protesters were treated differently than the BLM protesting peacefully this summer..

Likewise, the pro-Trump Mobs stormed the capitol building with ease and were met with little force from the police. “Violence has erupted at protests involving both groups over the last year, but not on the scale of what happened Wednesday,” says Josh Elliot, a writer at Global News. “The pro-Trump mob also made it further into a federal building than any BLM protesters did last year.” The amount of protection that was present during the BLM protests compared to the Trump riot proves how much privilege the group has.

Although Police did little to stop the mob from infiltrating the Capitol, certain people who were identified did receive punishment. Depending on their involvement, some Trump supporters ended up losing their jobs as well as getting arrested. However, compared to the tens of thousands of arrests during the BLM protests, there have been only 70 people charged with crims following the insurrection at the Capitol.

There is a clear separation between how Pro-Trump extremists and BLM supporters are treated. The difference in treatment is hard to ignore and should be analyzed and there should be efforts made to do better as a country. People of color being met with more force and violence than white individuals has plagued America for years and this event is no different.