Hyped up for weeks, “The Falcon and The Winter Soldier” feels confusing, slow and, at times, infuriating 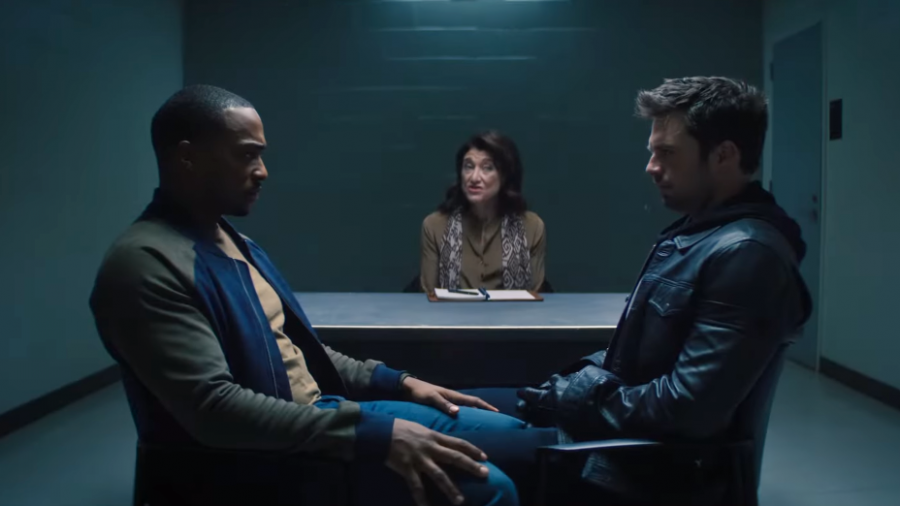 Tension between Bucky Banres and Sam Wilson builds after Steve Rodgers retired as Captain America. In "The Falcon and The Winter Soldier" explored that tension and how the two grow closer as friends and colleagues.

The Marvel fan base has been in a flurry recently due to the finale of the hit show “Wandavision,” the first update from the MCU since 2019 when “Spiderman: Far From Home” was released. With the popularity of “Wandavision” and the draught of Marvel related content up until recently, fans have been looking forward tremendously to “The Falcon and The Winter Soldier”.

Episode one of “The Falcon and The Winter Soldier” dropped on Disney+ March 19. The show surrounds Sam Wilson, James “Bucky” Barnes, and the death of the beloved Steve Rodgers (more commonly known as Captain America). We also get to meet Sam’s family for the first time and learn that his family owns a fishing business that his sister is struggling to keep afloat. About half way through the episode, we see Bucky lying to his therapist about his nightmares and his attempts to make amends with the people he’s hurt over the past 90 or so years as The Winter Soldier.

In episode two, the show dives deeper into the relationship between Sam and Bucky and shows how they envy each other and their similar roles in Steve Rogers’ life. There’s a new Captain America in town who already doesn’t appear to hold the same values as the original Cap. He shows an almost sinister craving for action, which was something that Rodgers rarely expressed in the same way. Episodes two and three seem to introduce the main conflict for the series. A band of supersoldiers has been found causing trouble with a group called “The Flag Smashers”.

“The Falcon and The Winter Soldier” has started off as a typical violent, crime fighting, bad guy hunting superhero show. As someone who went into this show expecting the same kind of atmosphere as “Wandavision,” I was thoroughly disappointed with the first few episodes. While this show may end up connecting to the overall MCU in small ways, it just feels like filler to keep fans entertained until more important shows and movies are released. I am by no means saying that the show is bad, but after looking forward to it for so long just to have it come off as a shallow action show, it makes me a little bit sad.

This show has hope, but there are only three more episodes waiting to be released so I feel as though there isn’t much hope for redemption. That being said, Marvel has gotten really good at shocking people when they least expect it, so I could be entirely wrong about the series.

You can watch the first three episodes of “The Falcon and The Winter Soldier” on Disney+ now.