The McHenry Messenger • May 10, 2021 • https://themchenrymessenger.com/final-concerts/ 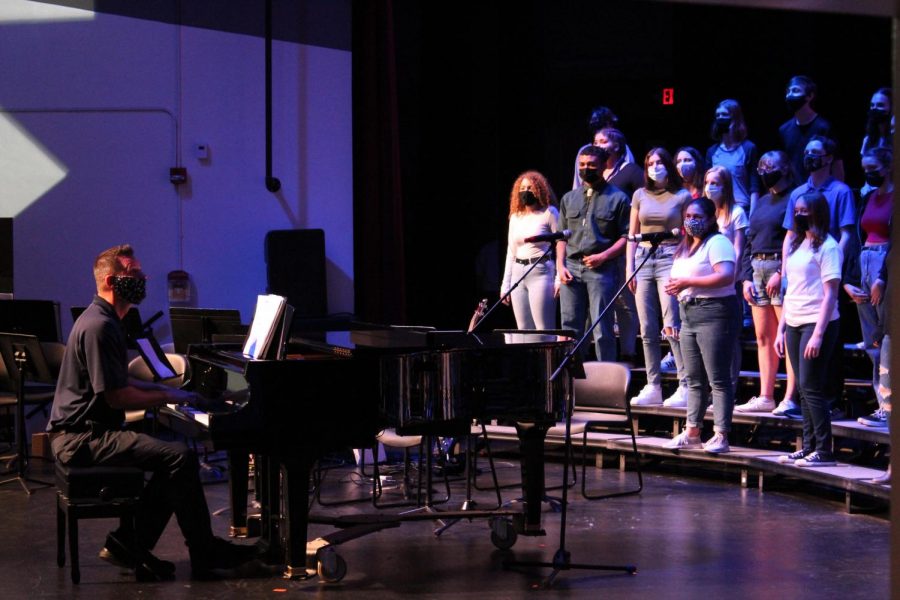 Choir director Derek Galvicius accompanies and conducts MCHS's Concert Choir as they perform their first and last concert of the year in the West Campus auditorium on May 6.

On May 5 and 6 Surround Sound, Cadet Choir, and Concert Choirs closed out the year with their last performances in the auditorium. The last band concert will follow on May 11, featuring the Freshman, Concert, and Symphonic Bands as well.

For both the band program and the choir program, these concerts will consist of three separate performances working as a showcase of the student work from the first half of the out of school semester and the second in-person half.

“We are doing a culmination of our entire school year,” adds Surround Sound member Anna Knecht. “So, we are singing one song from each quarter that we missed out on.”

Both of these events will also be socially distanced. The bands’ performances will take place in the East parking lot and will require all audience members to be sitting in their cars, or 6 feet apart on lawn chairs. Each family is also only allowed to bring three people to this performance and the banquet that will be held at the outdoor theater afterwards.

Surround Sound member Grey Siminak explains that the choir concerts in the auditorium were split up into two separate days in order to accommodate regulations.

“The normal amount of people that would go to a regular concert can see it, but obviously it needs to be socially distanced and we can’t pack that many people into the auditorium,” he says.

“It’s not going to be as technical as pops concerts in the past,” Siminak explains, adding that usually performers change clothes between each song for extra theatrics. “But since the dressing rooms won’t be open, it’s just going to be the same outfit for everybody the whole way through.”

Although many students look forward to more concerts in the future, for seniors, these will be their final performances before they graduate.

“Honestly, I am just so happy that I get to sing one last time,” Siminak says. “With getting into Surround Sound in his junior year and not getting to participate in Pops and Mads because of the pandemic, I’m very happy that we get to do something.”

For Zgrzebski, the final band concert is a great reminder of his time in the program. “This concert is kind of taking everything all together so we have a good end to the year.”