Though the team lost, the varsity football team found a lot to celebrate after their first home game — and a lot of ways to grow 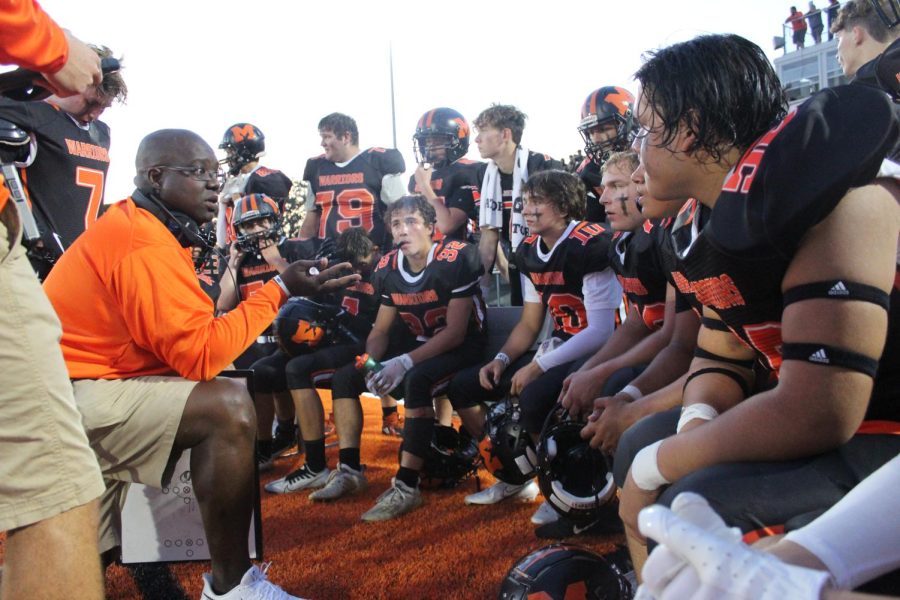 The varsity football team played Prairie Ridge during the first game of the season — the first ever at the revamped McCracken Field — on August 26.

On Aug. 26, the varsity and JV football teams played the first game of the season against Prairie Ridge at McCracken on the newly completed turf field and in new uniforms.

Throughout the night, the team was supported by Warrior Nation, the cheer teams, the dance team and the marching band. Warrior Nation showed their support by wearing black for the theme of blackout.

At halftime the dance team and marching band preformed. Though the varsity game score was 14-14 at halftime, the team lost 28-36 and now are ranked 7 in the conference. The JV team also lost to Prairie Ridge 6-9.

Even though the team lost, there were positive outcomes of the game. Domink Caurso currently leads the area with 260 passing yards after completing 17 or 29 passes and got two touchdowns. Wide receivers Zachary Maness and Jacob Zarek both had 100-yard receiving games and each scored a touchdown, and running back Dylan Drumheller ran for 85 yards and had a touchdown.

“Our energy was good for the entire game,” explained senior varsity captain Elijah Nothdorf. “Even when we went down by a few scores, we all stayed together on the sideline and kept that energy to get us rolling again. We all realize that we can compete with anyone. Prairie Ridge was a good team and we just fell short. If we play to our potential we all know we can go father this year.”