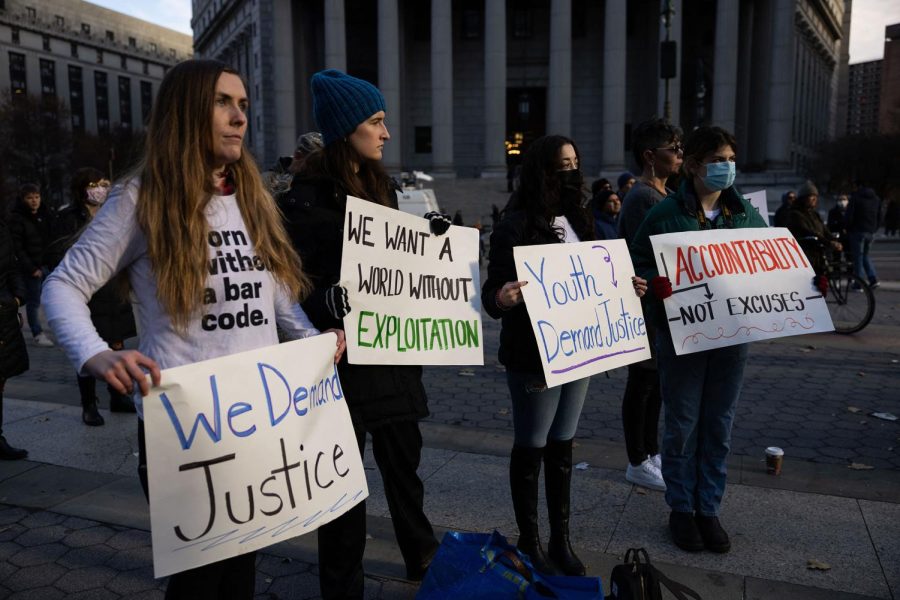 Demonstrators rally in solidarity with the Jeffery Epstein and Ghislaine Maxwell survivors in New York on Saturday, Dec. 4, 2021. Maxwell has pleaded not guilty to six counts of enticing and transporting minors for sex in connection with convicted sex offender Epstein, who died in 2019.

On Nov. 29, Ghislaine Maxwell’s trial began for her role in recruiting young girls that would be sexually abused by socialites. Four women gave their testimonies on Nov. 30 and Maxwell pleaded not guilty to all six charges.

In 1990, Maxwell and Jeffrey Epstein began their sexual crimes against minors. They would fly to a private island along with friends in higher ranks, such as former presidents and celebrities. In the island, young girls were brought to engage in sexual acts, most of which took place at massage tables spread throughout Epstein’s houses. Epstein was eventually arrested, but he commited suicide while awaiting trial. Maxwell was faced with her indictment and arrested last summer.

“MAXWELL first attempted to befriend some of Epstein’s minor victims prior to their abuse by asking them about their lives, their schools, and their families.” states Maxwell’s indictment. “MAXWELL and Epstein would spend time building friendships with minor victims [by taking them] to the movies or shopping. Some of these outings would involve MAXWELL or Epstein spending time alone with the victim.”

After befriending the victims, Maxwell used their trust to pressure them into the sexual acts performed by or with Epstein.

“Having developed a rapport with a victim, MAXWELL would try to normalize sexual absuse for a minor victim,” states Maxwell’s indictment, “by among other things, discussing sexual topics, undressing in front of the victim, beinf present when a minor victim was undressed, and/or being present for sex acts involing the minor victim and Epstein.”

The court case against Maxwell started on Nov. 29 and was projected to last six weeks. According to CNN News, four women testified against Maxwell, three under pseudonyms and one under her real name.

The first woman, Jane, claimed to have met Maxwell and Epstein when she was 14 at a camp. She claims Epstein and Maxwell made her feel special by spending time with her and talking about her interests. Jane described the sexual abuse she experienced at the hands of Epstein and Maxwell, mentioning the sexualized massages she performed. Defense attorneys compared her testimony to one given in 2019 and concluded that there were inconsistencies.

A second woman, Kate, testified that Maxwell had invited her to Epstein’s house where she was asked to perform a foot massage. Kate added that Maxwell had once given her a “school girl” outfit to wear when meeting Epstein. Additionally, Maxwell had encouraged Kate to recruit other girls for Epstein, “You know what he likes — cute, young and pretty like you” said Maxwell, according to the testimony. Kate is not considered a minor victim as she was over the age of consent. However, jurors are allowed to consider her testimony.

Carolyn, another underage victim, claimed to have been 14 when she started visiting Epstein’s house. On one visit, Carolyn claims Maxwell groped her and told her she “had a great body for Epstein and his friends.” She also claims to have received $600 every time she brought along a friend. Defense attorneys claimed that Carolyn’s testimony was inconsistent with statements given to the FBI in 2007 and 2009. They insinuated that Carolyn was only attempting to get money for her testimony.

Annie Farmer was the only victim to testify under her full legal name. Farmer claimed that Maxwell had told her to get undressed so she could get a professional massage. She added that Epstein had taken her to a guest room to cuddle. Lastly, she claimed that her, Epstein, and Maxwell went to see a movie where Epstein was blatantly touching her inappropriately. Defense attorneys claimed she was overstating what happened in hopes of getting money from the Epstein Victim Compensation Program.

After several days of testimonies, the Maxwell trial was put on pause. It is set to resume on Dec. 16 where Maxwell or her attorneys will give their own account of the events. If Maxwell chooses to take the stand she could be subjected to cross-examination. The trial will not be televised as federal courts forbid cameras.