The Trump impeachment inquiry—what you need to know

The evolving news surrounding President Trump's impeachment inquiry can be hard to keep up with, but some basics can keep Americans in the know 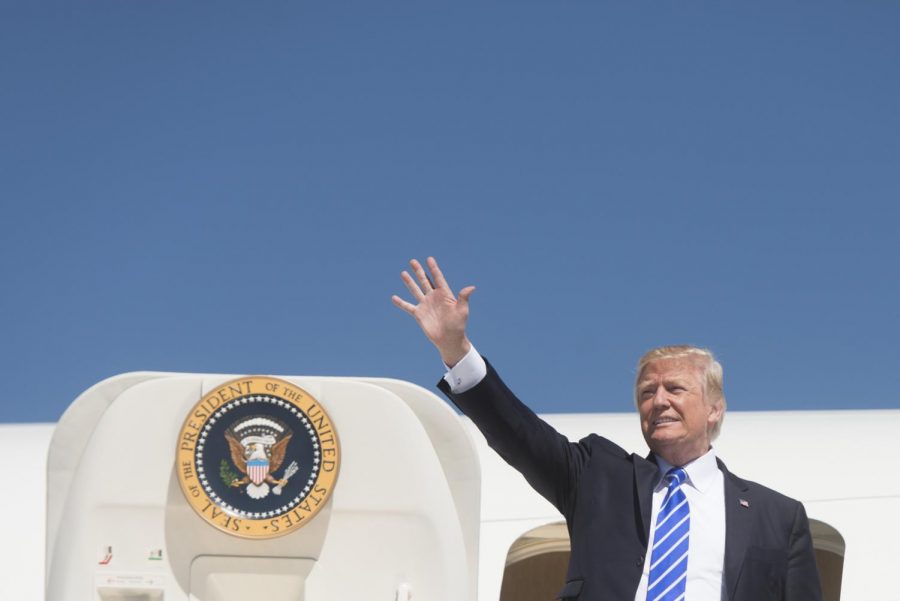 President Donald Trump waves to supporters from Air Force One onSeptember 6 in Mandan, ND following an event with energy workers. The inquiry surrounding President Trump's impeachment has dominated the news cycle since a whistleblower's report became public in September.

According to the United States Constitution, “The President, Vice President and all civil officers of the United States, shall be removed from Office on Impeachment for, and Conviction of, Treason, Bribery, or other high Crimes and Misdemeanors.” President Donald Trump is currently being investigated for possible high crimes and misdemeanors.

According to an NBC/Wall Street Journal poll from November 3, 49 percent of Americans believe that Trump should be impeached and removed from office while 46 percent say he should not. This is a pretty shocking statement, and seems to be a reflection of our time. Controversial, argumentative, scandalous. How does one make sense of it all when there is so much to make sense of?

For starters, Trump and his Vice President Mike Pence were inaugurated into office January 20, 2017. As President and Vice-President, they were given a set of rules and policies to follow. They work alongside the rest of the federal government (including the Supreme Court and Congress) to keep the government running. However, if Congress, consisting of the House of Representatives and the Senate, believes that the President or other civil officers are not fit for office, it is their obligation under the Constitution to remove them from office.

In this case, Speaker of the House of Representatives Nancy Pelosi, D-Calif., announced an impeachment inquiry into President Trump in late September after an anonymous government whistleblower revealed certain suspicious and possible unethical behavior on the President’s part. The whistleblower was concerned about a phone call from the White House to Ukrainian President Volodymyr Zelenskiy.

During this call, Trump discussed conspiracy theories concerning Democrats tampering with the 2016 election, as well as the possibility of Zelenskiy investigating into Democratic presidential nominee political rival and former U.S Vice President Joe Biden and his son Hunter Biden. Trump’s lawyer Rudy Giuliani, as well as multiple sources from closed-door testimony, confirmed this.

After the inquiry opened, a House of Representatives investigation was launched as of September 24, consisting of six committees. Each committee specialized in a certain area, with the Intelligence Committee designated as the main lead. After the House investigation was finished, the House of Representatives voted to advance the inquiry with a count of 232-196 on October 31.

We are currently in the midst of the next step needed to continue the investigation. Throughout this month, public hearings will be held in order to both gain further information as well as try to inform and keep the public connected to what is going on.

If the Judiciary Committee decides to continue the investigation following the information presented from public hearings, the committee will debate which articles of impeachment shall be sent to the House for judgement.

Next, after receiving these articles, the full House will have a majority vote on whether or not the President should be impeached. If the answer is yes, the case goes to trial in the Senate. There, the Senate decides how the procedure should take place, including “how evidence can be presented, the number of days the trial can last, and how many witnesses can be included.”

Finally, the trial takes place, and it is decided whether the impeachment should or should not take place. Those participating in the trial include the House members as prosecutors, the Senate as the jury, the President’s lawyers defending him, and the Supreme Court’s chief justice serving as the judge. It should be noted that there is a Republican majority in the Senate, but a Democrat majority in the House. Along with this, the Supreme Court’s chief justice is appointed by the president and approved by the Senate.

Whether any of this will take place is still up in the air, but evidence points in that direction. Former U.S ambassador of Ukraine Marie Yovanovitch testified that she was warned by Ukranian officials that Trump’s lawyer was going to “… do things, including to [Yovanovitch]”. Continuing with this, after her removal from Office, Trump was on the record with Ukrainian President Volodymyr Zelenskiy stating Yovanovitch was “bad news”, and that she would “go through some things”. Trump has defended the call, saying “the President of Ukraine was not a fan of hers either.”

Many Republicans have also defended the call, describing it as not enough of an issue to require impeachment. In a letter sent to Speaker of the House Nancy Pelosi and several committee chairs, the White House counsel Pat Cipollone said Trump would not comply with requests from the House’s impeachment inquiry. Although protected under the Constitution, Cipollone stated the inquiry itself was unconstitutional, and Trump’s duty was to “preserve the rights” of future Presidents.

“We have an obligation to investigate corruption,” Trump states.

House Speaker Nancy Pelosi feels the same way. “In one conversation, he undermined our national security by withholding military assistance to a country, that had been voted on by the Congress of the United States, to the benefit of the Russians. At the same time, he jeopardized the integrity of our elections, the heart of our democracy, and in doing so, in my view he possibly violated his oath of office to protect, defend, and preserve the Constitution of the United States.”