The McHenry Messenger • May 20, 2022 • https://themchenrymessenger.com/johnny-depp-v-s-amber-heard/

Johnny Depp's defamation trial against ex-wife resumes; both Depp and Amber Heard are accusing each other of domestic violence 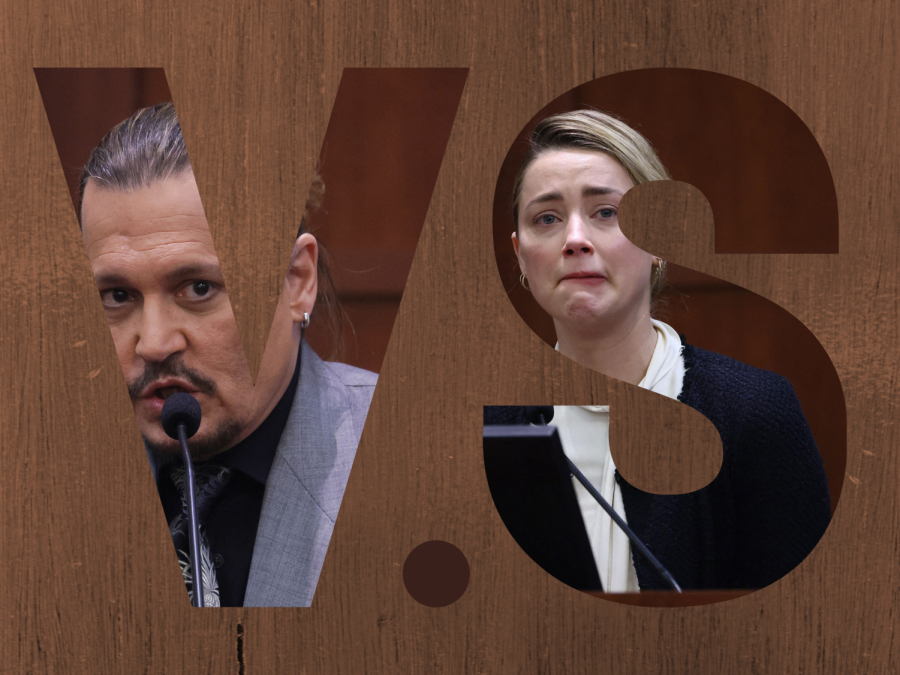 Johnny Depp's defamation trial against ex-wife Amber Heard began in April and has only become more dramatic each day.

On May 16, actor Johnny Depp’s defamation trial against ex-wife Amber Heard entered its sixth week in a Virginia court.

Depp is suing his ex-wife, Amber Heard, for $50 million over an interview with The Washington Post in 2018, stating that she is “a public figure representing domestic abuse.” Heard filed a $100 million countersuit against Depp in 2020.

The trial, which started on April 11, is expected to last six weeks.

After starring in hit movies such as “Edward Scissorhands,” “Donnie Brasco” and the many Pirates of the Caribbean sequels, Depp’s film career started to decline during the 2010’s while his personal and financial problems began while Heard was becoming more of an icon.

The trial stems from an opinion article from the Washington Post called “I spoke up against sexual violence – and faced our culture’s wrath. That has to change.” Though Depp is never mentioned in the article, Depp and his lawyers have argued over whether Heard is implying that Depp has abused her throughout their marriage.

Heard’s lawsuit filed in 2020, on the other hand, claims that Depp has conspired with his former lawyer to “attempt to destroy and defame” Heard in the press. The “Johnny Depp vs Amber Heard” trial followed suit, and there were many key factors throughout the many testimonies already made by marriage counselors, psychologists, and friends of both Heard and Depp.

Johnny Depp finally took the stand on  April 19. On his fourth and final day of testimony on the stand, Depp was cross-examined by Heard’s attorney Ben Rottenborn. Depp has previously been accused of minor charges such as property damage and verbal threats.

Yet, he has never before been accused of the kind of violence Heard describes in her account in which Depp’s previous girlfriends have described as “uncharacteristic of him.” Further in his testimony, Depp was asked about audio recordings of arguments with Heard and whether she was the only person who had a problem with his alcohol abuse.

“Sir, if anyone had a problem with my drinking, at any time in my life, it was me. The only person I’ve abused in my life is myself,” Depp replied.

In another audio recording during a conversation about an incident that happened in Australia, Heard appears to mock the idea that Depp might position himself as a victim. Depp had started drinking in Australia during the filming of one of the “Pirates of the Caribbean” franchise films and had a bottle of vodka thrown at him, severing the top of his finger.

“I lost a f—ing finger, man,” says Depp. “I had a can of mineral spirits thrown at my face.”

In that same conversation between Depp and Heard, Heard argued about some concern about her reputation regarding many press posts about potential abuse in their relationship.

In that recording Heard said, “Tell the world, Johnny. Tell them, Johnny Depp, I, Johnny Depp, a man, I’m a victim, too, of domestic violence, it’s a fair fight, and see how many people believe or side with you.”

In reaction to that recording, Depp’s attorney, Jessica Meyers, asked, “What did you say in response to Ms. Heard?” Depp replied, “I said, Yes. I am,'”

Amber Heard finally took the witness stand on March 4 to describe the circumstances surrounding the first time she met Johnny Depp. She first recalled the young love she felt for Depp earlier on in their relationship.

“When I was around Johnny I felt like the most beautiful person in the whole world,” Heard said, later adding, “I fell head-over-heels in love with this man.”

On that Wednesday, a forensic psychologist was also hired by Heard’s team, Dr. Dawn Hughes, testified over Depp’s “obsessive jealousy” towards Heard during their relationship.

Amber Heard quickly contrasted that young love for Depp and tearfully recounted how the first time Depp turned violent against her. “I will never forget it. It changed my life,” Heard told the jury, recalling Depp allegedly slapping her “across the face.”

That following Thursday, Heard yet again tearfully testified, how in a jealous rage, Depp flung her into a ping pong table and then sexually assaulted her.

“I couldn’t get up. I thought he was punching me. I could just feel this pressure on my pubic bone,” a crying Heard said.

Heard’s testimony continues throughout the week, and on many accounts throughout the testimony there is speculation that Heard was (or is) lying about the bruises that Depp has been accused of giving her or seemed to be making up stories about what had happened to her.

“She can’t back down. She has been living and breathing this lie for years,” Depp’s co-counsel Camille Vasquez said. “She’s going to give the performance of a lifetime in this courtroom.”

There has been much speculation as to whether or not Depp will win this trial and to see Depp’s reputation fully recovering from his recent string of lawsuits. But, the sheer volume of online support for Depp has become one of the biggest aspects of this case. On Reddit, Twitter, and TikTok, people are sending their support for Depp and their pride that Heard is a liar. Twitter and TikTok have overwhelmingly backed Depp, with hashtags like ‘#JusticeForJohnnyDepp’ with 3 billion views on TikTok and trending topics on Twitter like ‘#BelieveMaleVictims’. Similar hashtags have been tweeted and retweeted thousands of times. Our culture seems unable to accept that we could be looking at a story without a clear hero or villain. Instead, we demand a tidy narrative with a heroic redemption arc, one abuser and the other being abused.

Needless to say, this trial is messy, especially in the aspects of a Hollywood relationship with a lot of unsolved questions. Johnny Depp is still capable of commanding the nation’s attention.  For a movie star whose fame is fading fast, with the evidence of lying and the overwhelming support on social media, that could push for justice in the courtroom for this heartbreaking trial.