The McHenry Messenger • May 19, 2021 • https://themchenrymessenger.com/key-to-success/

The key to success

Despite the limitations and challenges of the pandemic, West campuses’s Key Club has continued to find ways for members to contribute to and volunteer in the community 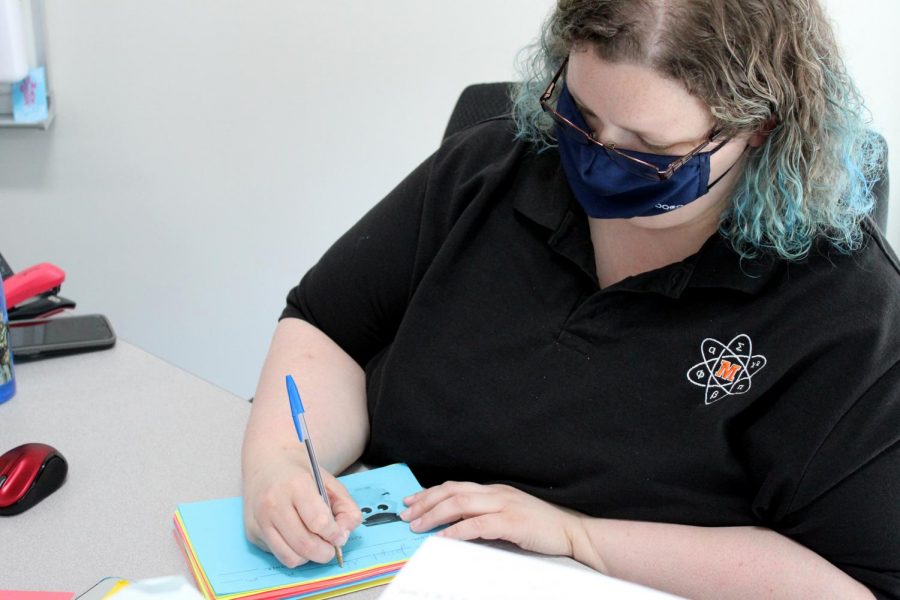 West math teacher Emma Theel fills out forms for Kiss a Senior Goodbye, a Key Club event to make sure each senior leaves high school with a special note from a student. Theel has been Key Club advisor for 20 years.

Students gather in the gym to wrap hundreds of donated gifts to give to families in need. While the task is simple and students are having fun, the work they are doing is important. Without the hour that these students are putting into wrapping gifts, several children across McHenry Country wouldn’t receive gifts under the tree on Christmas morning.

“I am most proud of being able to still accomplish our Christmas adoption even though we were still not in school yet and COVID restrictions were more strict,” said president Aubrie Hocin. “Because of this around 200 kids were able to wake up Christmas morning with gifts under the tree.”

This annual Christmas gift wrapping event is just one of many volunteer opportunities that MCHS West’s Key Club offers its members and the community even through the pandemic.

Key Club is “an international, student-led organization that provides its members with opportunities to provide service, build character and develop leadership,” states the mission statement on the Key Club website.

For the last 20 years, Emma Theel, math teacher, has been the Key Club advisor at West Campus. Having been in Key Club during high school herself, Theel stepped up as the advisor when she was presented with the opportunity after she began teaching at MCHS.

“At the time … I was also going to be the student council advisor that year too and now, as a second year teacher, that’s a little overwhelming,” said Theel. “But I decided, student council had co-advisors and at that point Key Club had like 30 kids in it. Yeah, I could do that. So then I did that, and after two years I dropped the student council, when I started my master’s degree, and then I’ve just been with Key Club ever since.”

Each year, Theel had more students joining Key Club which allowed the club to expand and reach a greater number of people and organizations in the community.

“We gradually grew and so we added projects as we went along and then people were like, ‘Oh, this is fun. We’re doing more things.’ Then brothers and sisters would join or cousins would join and the word got out in the community more, and so it just kind of gradually increased. In 2010 was the first year we had over 200 members,” said Theel.

Now, West campus’s Key Club has close to 300 students and is one of the largest Key Club branches in the state.

“I think a big part is that we’re usually in the top five of the biggest clubs in the state for a Key Club. I think that’s huge,” said Theel. “I think that also shows the community that we have kids that care, … that there are good kids in the community. We have an excellent reputation with the organizations we work with. … That is an awesome feeling when you know you have that good reputation out there. I think that is probably one of our biggest accomplishments.”

In addition to being one of the largest Key Club’s in Illinois, West’s Key Club has also been consistently successful at their annual Key Club convention.

At the 2020-2021 convention, held virtually this year, West’s Key Club won 1st place in the Robert James Hall Achievement Report in the Platinum Division and received patches and certificates for RIOT, Newsletter, and Technology.

“We got the first place for the achievement year report, which we’ve never received before, because a lot of clubs did not do anything this year, or did very, very little,” said Theel. “We were still able to host Special Olympics events and go to Feed My Starving Children all the time, and the officers came up with, let’s do the dog toys, let’s do cards. Let’s do things at home that you guys could do while you were stuck at home.”

Several of the current Key Club board members were also recognized at the 2020-2021 convention, receiving several distinguished awards.

“I like helping people and I thought being a board member would [get me] more involved in Key Club,” said Parrish.

In addition to receiving these awards, West’s Key Club also received recognition for being one of the few clubs to continue providing volunteer opportunities to its members throughout the pandemic.

“We got a lot of shout outs at the digital convention,” said Theel. “McHenry West was named multiple times because we did a lot during the year and we’re active on social media with all of that and I think. So maybe [we did not receive] awards, awards but notices that we had stayed active and done our job [during the pandemic].”

Continuing to provide Key Club members with volunteer opportunities throughout the pandemic was something that the board prioritized. They felt that continuing to have activities, both in person and at home, would allow students the opportunity to connect with each other and help their community in a time of need.

“Even though we’re in a pandemic, in a crisis, it’s still important to help out people in need and show [that we] are still here, the be one community,” said Kevin Marquez, public relations officer.

“Volunteering is always important and it is something that brings joy to everyone involved, so I think it was super important for us to find ways to help during the pandemic since it was a time that definitely needed some positivity,” said Hocin. “Along with having a way to kind of connect students.”

Providing members with these volunteer opportunities during the pandemic hasn’t always been easy for Theel and the board members to come up with. Capacity limitations and organizations not being able to function has greatly limited Key Club’s opportunity for volunteering.

“Coming up with events during COVID [has been the biggest challenge this year] because we could only have a certain amount of people at each event, and we would have to get it approved,” said Abiol. “We still made it happen but it was definitely a struggle.”

Despite the struggle, the board members and Theel still continued to host and organize volunteer events. This dedication, along with lasting connections that West’s Key Club has made throughout the community, has led them to success over the years.

Another large part of the club’s ongoing success comes from Theel and the Key Club members themselves, both of whom help build and maintain those relationships among the community.

“I would say [Key Club is successful] because our advisor, Ms. Theel is very passionate about Key Club and she always puts the most in and all her best effort in it,” said Fralick. “Having that advisor passion really reflects on the club and how well we do.”

“Key Club so successful is in my opinion the fact that the members want to be involved and are enthusiastic and sign up for numerous events, especially right now with COVID, events fill up fast. The dedication of the members of the club is outstanding,” said Samantha Perez-Garcia, co-historian.

For many Key Club members, the club is much more than just volunteering and earning service hours. Being a part of Key Club helps them build confidence, relationships with other members, leadership skills, and connections with the community members they are serving.

“Key Club is important to me because I became very interactive and found new friends through Key Club,” said Floden. “I think I wouldn’t exactly be as confident as I am now. I’m way different from my freshman self. And if I hadn’t done [Key Club] or NHS really, I just wouldn’t be able to be as forward anymore. It’s very important to my character right now.”

West’s Key Club is fueled by member participation and their passion for helping others. Theel, alongside the board members that have stepped up to be student leaders within the club, have contributed to creating a successful club and strong sense of community at MCHS.

The recognition Key Club has received over the past year is great but, the real accomplishment is the community service and relationship they were able to build even through a global pandemic.

“Just seeing that growth from kids, not just not academic growth or anything but just social emotional growth from being a shy, introverted person to being someone who is a leader in an organization or someone who puts a lot more effort and thinking into it than they did when they were freshmen,” said Theel. “So I think that’s one of the best parts of it is seeing the kids be able to grow and as a person and then their leadership abilities and seeing and helping the people that we help.”