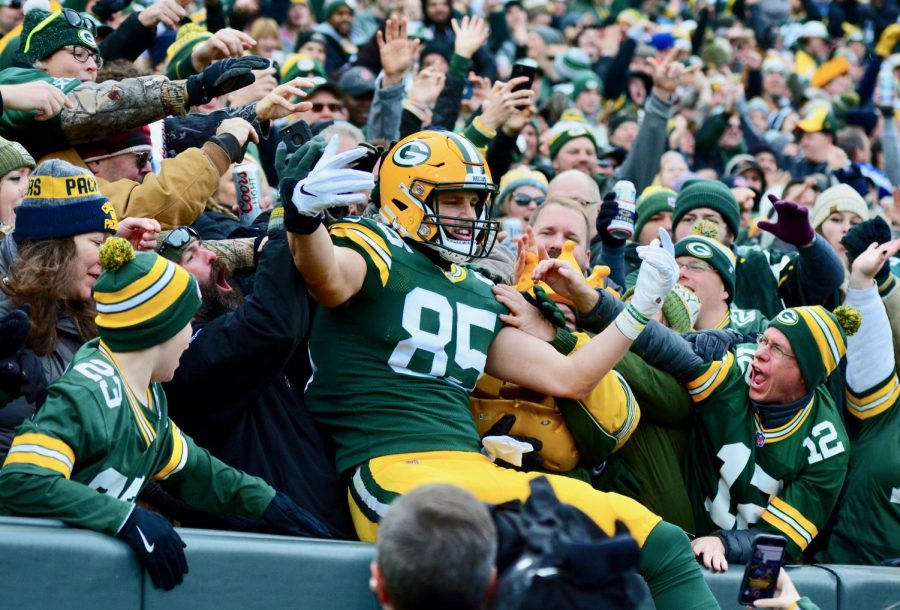 As a Warrior, Tonyan set the school record for passing yards with 5,000 and was named to the All Conference team as a junior and senior. Now a Green Bay Packer, Tonyan tied for fifth in the league in touchdowns during the 2020 season.

He jumps off of the line of scrimmage and dodges a defender. With his head down, Robert Tonyan runs straight into the end zone. He turns around quickly, and receives a pass from quarterback Aaron Rodgers. Tight end Tonyan spikes the football into the ground in celebration before opening his arms to the fans. Tonyan, once an MCHS student, has just scored a touchdown in the NFC Championship.

Tonyan began playing football when he was in fifth grade for a program in nearby Woodstock. In high school, he set the school record for passing yards with 5,000 and was named to the All Conference team as a junior and senior.

His MCHS varsity football coach, Tim Beagle, remembers him and his accomplishments well. “It is so rewarding, like a proud parent, to see a young man that I spent so much time with coaching and guiding, being able to excel at the highest level of his sport,” he says.

Following his graduation from high school in 2012, Tonyan attended Indiana State University for college. While there, he red-shirted his first year, but found himself as a starter for the next four years before graduating from college. During his time at Indiana State, he switched positions, which would become a crucial decision in his football career.

“I knew I was being considered for the NFL in college at Indiana State,” Tonyan says, “when I was switched to a wide receiver and NFL scouts started coming to practices.”

After being undrafted in 2017, Tonyan was signed by the Detroit Lions to a three year contract as a free agent. He would end up being released before the season began. Later, the Green Bay Packers signed him for the final four games of the season on the practice squad.

In Detroit, he gained a new mentality that would guide him to success. Tonyan explains, “I continue to play like there is a chip on my shoulder and play with the mentality that someone can steal my job at any point. I continue to work hard and prove myself.”

In his first two years with Green Bay, Tonyan played a total of 27 games with 177 yards. He had a very successful season in 2020, with 52 receptions for 586 yards, and an impressive 11 touchdowns, which would put him tied for fifth in the league. He would even pick up a touchdown in the NFC Championship.

“Don’t let other people put their limitations on you,” Tonyan explains. “Failures are learning experiences and that’s how you get through adversity.” It is because of this mentality that young athletes in McHenry look up to Tonyan and his success story. Many dream of being the next hometown star and learn from his determination and grit.

“I believe Robert is a testament to what young people can accomplish if they set their minds to a goal,” Beagle explains their admiration.

MCHS alumni Tonyan has always been a stand- out athlete, but his mindset and perseverance set him apart. As an NFL player, Tonyan has had challenges and rewards in his journey, but one thing remained-an optimistic attitude. Young athletes look up to him as a role model, aspiring to make it big.