This year, East and West Campus became the Freshman and Upper Campuses, which led some teachers to switch buildings and leave their classrooms behind 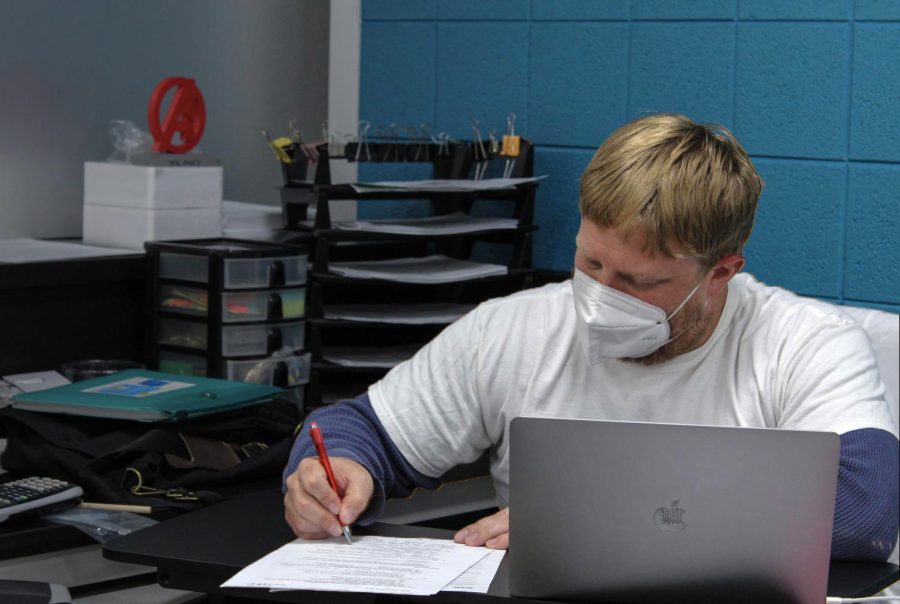 Science teacher Derek Poci grades papers in his classroom in the Center for Science, Technology, and Industry at the Upper Campus. A former East teacher, Poci is one of many teachers who switched campuses over the summer.

An East teacher gets an email from administration that she is moving her classroom to West, and that her classes will be held at the Upper Campus the following school year. She is nervous but excited all at the same time because of all the new students and teachers she will meet. As the next school year approaches, she packs up her classroom of 20 years and says goodbye.

“I spend most of my day with my best friends, and they are all chemistry teachers,” described Derek Poci, an Upper Campus teacher who moved from East. “I was excited because I liked the idea that we’re all in one hallway. We can look across the hall or look through the lab and we can see each other, so I had no qualms about it.”

The same excitement has held true for most of the teachers that came to the Upper Campus, though they had different thoughts and feelings about swapping campuses at first.

Meghan O’Neil, a former East teacher, described, “I was pretty bummed. The freshman campus has been my home since I was hired. I have had the same classroom the entire time and it has been a place where I made a lot of memories.”

For many teachers, packing up their pervious classroom was one of the most difficult aspects of the transition. Switching buildings can entail a lot of work and stress when it comes to moving everything in a new classroom.

“My first thought was, I [have] got to pack up a lot of stuff,’” explained Adam Malenius, a social science teacher at the Upper Campus and former East teacher. “We had two years though, but the first year I didn’t worry about packing up. All last year, everyday I’d look at this big cabinet I have. Then I am like, I gotta pack this stuff up.”

When the teachers were settling into their new classrooms, many teachers found the ups and downs of their room. “My new room, the biomed room, is beautiful! It is a dream classroom to teach in,” described Leah Pelletier, an Upper Campus science teacher who taught at East until this year. “I have loved being able to teach here and for my students to have access to so many amazing resources and equipment.”

With the advantages always come the disadvantages, and for many they have had difficulty with the technology in their new classroom.

According to Micheal Meyer, an Upper Campus math teacher that moved from East Campus, “The only difficulties that I have had is dealing with some of the technology in the classroom. We are currently working some things out, but once that is complete it will be business as usual.”

Some teachers from the former East Campus came to teach students during summer school. For some of these teachers they had never taught at the Upper Campus, and it truly helped them get used to being a teacher at the upper campus.

“I did teach summer school here,” explained Marla Currie, a former East English teacher who now teachers at the Upper Campus, “which I think helped me out big time because I was already in the building, and like just getting used to the idea that when I drive to work, I’m not going to East Campus, I am coming to the upper campus,”

East Campus was the smaller of the two campuses, which meant fewer students, teachers, and a smaller building. This made it feel very homey to almost everyone at East, and some of the teachers that moved to the Upper Campus are missing the comfort of the now Freshman Campus.

“East is a smaller school,” Currie said, “so it’s always felt like a close, tight knit family atmosphere. So I was worried about this campus not only being larger before the combination, but it is even larger now. I think after time it will get more of that family atmosphere.”

Most teachers came over to the Upper Campus to pursue their specific teaching passions that might not have been fulfilled at the Freshman Campus, due to freshman not being eligible to take upper level classes and electives.

“My passion is teaching government and U.S. history,” explained Melanius. “I will follow where the kids followed, and since they weren’t having those classes over at East. It makes 100% sense to come over here.”

Many teachers are following where their class is, whether it is at the Upper or Freshman Campus, but not all. “It does not matter to me what side of town or what building I am in,” described Meyer. “I have a classroom full of students that I need to teach math.”

During this adjustment period of shifting campuses, most teachers are looking at this as a positive experience and are excited for their new adventures, relationships, and students in the upper and freshman campus.

When that teacher unpacks into her new classroom in the Upper Campus, she feels homesick and misses East Campus. But she can’t wait for her new adventures to begin, as the school year starts.