Opinion: Stand or don’t, but understand what the flag stands for

More and more students express their freedom by choosing not to stand for the Pledge of Allegiance — which is okay, as long as they comprehend this patriotic tradition 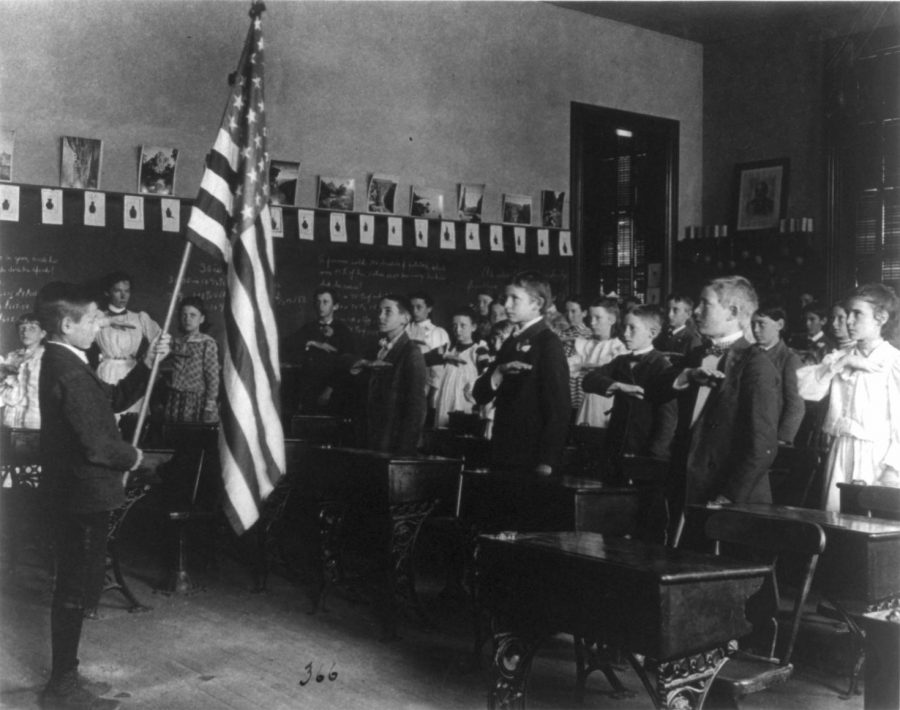 Students in the United States pledged their allegiance to the American flag well before 1942, when Congress formally adopted the Pledge—even as early as 1899, as in this image. In more modern times, students question whether the Pledge should be a required part of their day.

Since closing MCHS on March 17, students have participated in academic work on Schoology, but many have not recited the Pledge of Allegiance. At school, the Pledge was spoken over the PA system every morning, but many students fail to recite the Pledge on a day-to-day basis. Even before the COVID-19 pandemic, there was substantially less enthusiasm to say the Pledge—which is okay. At home or at school, people should feel comfortable choosing not to recite the Pledge of Allegiance as they are educated about the meaning of the flag that represents their country.

Joseph Kalisek, a special education teacher at west and an Army veteran of 30 years, ensures that all of his students were given proper instruction on the Pledge of Allegiance. “In my classroom,“ he says. “From the beginning of the year to the end, there are fewer than 10% who remain seated and that is allowed only because I have educated them on every word, pause, meaning and reasoning for the flag etiquette we have in our country.”

However, since Kindergarten it’s always been the teacher’s responsibility to show students flag etiquette.

Regardless, if the classroom is as quiet as sitting in the library, I still stand. All it takes is one person to rise, and another person will join in.

Learning about flag etiquette is important going into adulthood because there are proper ways to fold flags, and even dispose of flags. Teaching students the Pledge of Allegiance is just the basics. Since symbols are controversial, it is important for people to respectfully, agree to disagree, on the symbolism of the flag.

If students today do not understand why they stand for the flag, they should be concerned, for the tradition is already crumbling. The flag is more than a representation of our society; it honor the country and all who have sacrificed their lives for our freedom.