While shortened passing periods worked for digital learning, students are struggling between classes with the minute lost, especially with a new extension to navigate 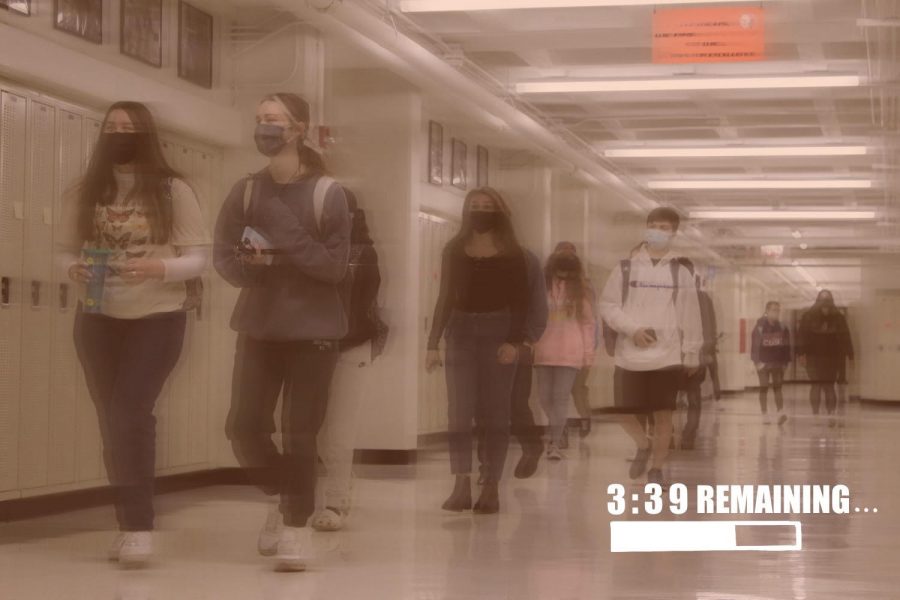 The four minutes that students have between passing periods are meant to keep kids from congregating in the halls, but that missing minute has also made it more difficult to get to class on time.

Before, when we were fully online, the short passing periods were not a problem considering we just needed to hop on another Zoom. However, now since most students have returned full time shortened passing periods are making it difficult for students to reach their class on time with little leeway.

Since the begging of the year, the schedule has differed in many ways compared to before. Each class was shortened to 40 minutes and every passing period lost a minute making them 4 minutes — except for one in between the 2nd and 3rd periods which was extended to 6 minutes.

The shorter passing periods make it difficult for students to reach their classes on time. Especially with the newly added wing, which can take a while to get to depending on where they are in the building. And because the majority of students are returning full time the hallways are much more crowded than before. This can make it even more stressful to get to classes before the bell.

The time between classes not only allows students to get to their next class it also gives them time to use the bathroom. Especially with classes shortened to 40 minutes, there’s not much time to ask to use the bathroom. And four minutes is not long enough to fit in a bathroom break while still having to get to another class.

People who travel to another school would benefit a lot from a longer passing period. Plenty of students who need to take a shuttle have to leave early so they don’t miss the bus. And end up showing up to class late because of the time it takes for the bus to arrive. This takes away their class time which is already shorter than usual. A longer passing period would allow these students to get to the other school on time without wasting class time.

Although a longer passing period would add more time onto the school day, this would only be by a few minutes and won’t make much of a difference. In the end, it will allow students more time to get to their destination and accomplish things like using the bathroom without needing to rush.

With shortened class periods there’s no time to spare. Missing out on even some of class can hurt your grade and relationships with teachers, This is why getting to class in time is important and our current passing periods are making that difficult. Allowing students more flexibility will be beneficial for everyone.