During the pandemic, students have struggled with school, mental health, and their number one stressor: satisfying their parents 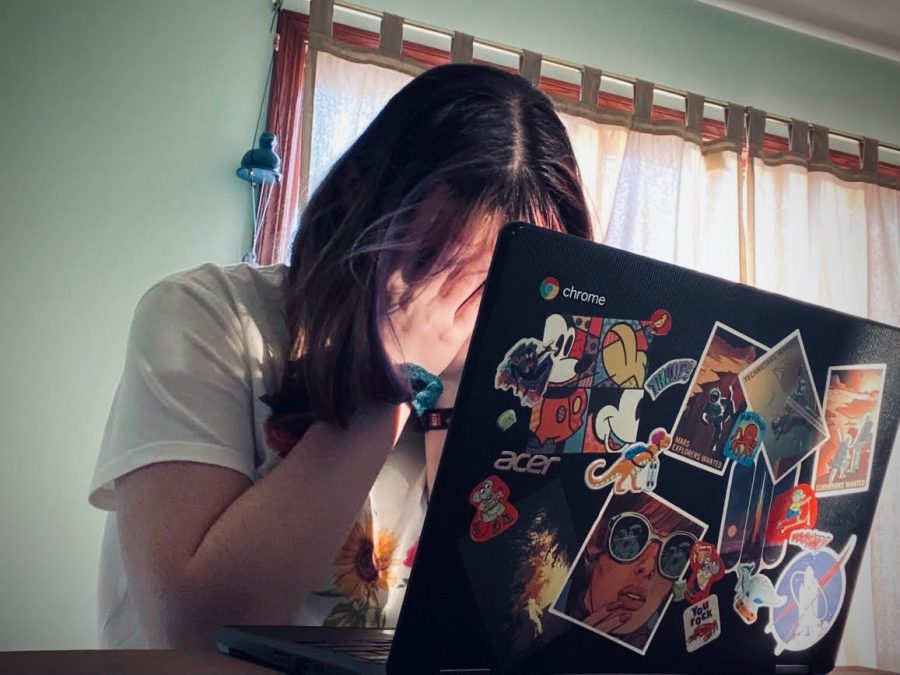 Being a teenager is already stressful enough, and the pressure added by the pandemic has made it so much worse. When parents add to this stress by being too pushy, research shows that it can have a particularly negative effect for a teenager.

A student wakes up to his alarm at 8:30 a.m., waking him up for his first class of the day starting at 9. While going through the school day, the student stresses about all his homework, helping his parents with younger siblings, and going to work right after school. The student arrives home from a late night shift only to get lectured by his parents about how his grades are “unacceptable” and he “doesn’t try hard enough,” leaving him more stressed, and putting more pressure on him, leading him to overwork himself.

In the words of Will Smith, a famous singer, songwriter and actor, “Parents just don’t understand.” Many people have parents who are on top of them for their grades, work, effort, and activeness. But, in the midst of a pandemic, parents seem to be harder on their children not realizing the circumstances they are working under.

According to an article published by the Society for Research in Child Development, overbearing parents are doing their children more harm than good. “Parents, educators, and clinicians should be aware of how parents’ attempts to control teens may actually stunt their progress,” says Emily Loeb, postdoctoral researcher at the University of Virginia, who was the lead author on the study. “This style of parenting likely creates more than a temporary setback for adolescent development because it interferes with the key task of developing autonomy at a critical period.”

The article later goes on to explain that this behaviour by parents is “unhealthy” and “manipulative”. Further, it’s stated that, “Children whose parents use this tactic tend to have problems such as lower grades and lower self-esteem, likely because the children are discouraged from asserting themselves and gaining independence.” It’s very clear that the enormous amount of stress and pressure put onto children slows them down, by degrading them and making them believe that they aren’t good enough.

But grades and school aren’t the only things that parents are pushy about. Many parents expect their children to help with chores or even babysitting during or after school. Now, chores are understandable, but in the middle of school or after when you have loads of homework can be a little over the top — especially in the middle of a pandemic where everything is online and it’s already hard to pay attention, let alone have to get up and leave the class to do chores and babysit. Yes, a majority of parents work from home in today’s society due to the fact that there’s a pandemic, so it’s good to help once in a while, but all the time is a bit excessive.

Lastly, parents expect their kids to do more than they can handle. An informal Instagram polls suggested that 89% of students have jobs to attend after school, and of that 89%, 62% said that on top of work, they are pressured and expected to stay up late after work doing school, cleaning, and anything else to satisfy their parents. This behavior is extremely unhealthy, especially for young adolescents, because their brains are still developing, so there is a lot of stress, anxiety and other factors that can play in, such as depression. Students shouldn’t be overworked, especially in the midst of a pandemic, where they already struggle with so many things such as school.

When parents take extra steps to punish their kids for struggling with these changes, it can deteriorate relationships between the children and parents. Parents are an essential part of shaping their children’s life, but not by force, rather by being there for them and supporting them. When a child-parent relationship is falling apart, it can be hard to build up, leaving the child to potentially rebel or not succeed as much. Many students grow up trying to be independent because of this, and it can hurt them in the long run.

Parents want what’s best for their kids, but there is a fine line between wanting what’s best, and being overbearing. Society is changing, and it’s hard for everyone to adapt, but students shouldn’t feel overwhelmed and as if they aren’t good enough because of their parents. Rather, they should feel supported and loved by their parents, and parents should be giving off that love and support that is essential to kids at such a young age, as they develop.