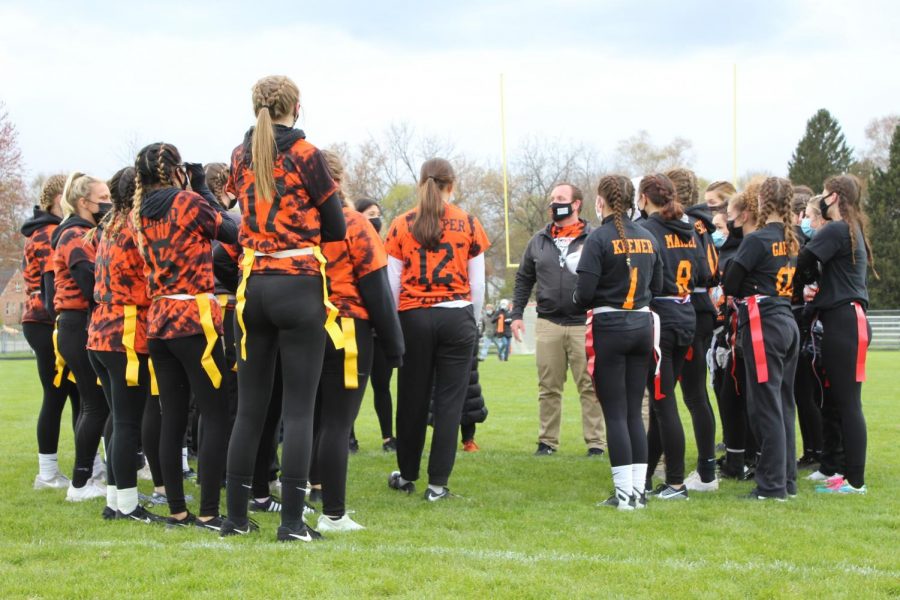 Spanish teacher Jordan Diener meets with both teams before the Powder Puff football game on April 20 at McCracken Field.

On April 20, under the lights of McCracken field, the senior girls of East and West went head to head in MCHS’s 8th annual Powder Puff flag football game in celebration of Homecoming week.

“Powder Puff is a tradition during Homecoming week that students always want to be a part of,” said West coach Jordan Deener. “I believe this year is going to be the last year of the West vs. East format and West is bringing home the trophy!”

Powder Puff has been a Homecoming tradition at MCHS for the last eight years. Every year, juniors and seniors play two separate games, both East versus West. With the campus transition happening next year, Powder Puff will likely take on a different format in the coming years.

“This game is important to not only me, but many other students – and even teachers – from both of the schools,” said Alexis Friedle. “This game is a tradition that provides an immense amount of entertainment.”

The friendly rivalry between East and West campus is invigorated every year at the Powder Puff game. Students in the stands from opposite campuses scream at each other across the field and the girls on the field play hard to earn the victory.

“I am very excited to get out there and play,” said Alyssa LaRose, a West player, before the game. “I am very confident that we are taking the trophy back this year, and I am excited to be around my friends and play some football!”

Players and coaches alike hope to win the game and take the trophy back to their respective campus and add their win to the legacy of plaques that decorate the sides of the trophy.

“I’m hoping that everybody [that] comes out here has a good time,” said West coach Sam Shafer. “And I’m hoping that we bring the trophy back to West for the last year of the crosstown rivalry with the Powder Puff program.”

“I would love to see East bring home the trophy,” said Tina Breitenbach, East coach. “I would like to see all of the girls have fun, all the boys, all of the students. It’s been a crazy kind of year for [everyone] and I really think that being able, as seniors, to have something to grasp on to and have fun with.”

But this year’s game was about so much more than the cross town rivalry. With COVID-19, students, especially seniors, have faced endless challenges and cancellations. This game in particular helped many students grasp a moment of normalcy.

“The most enjoyable part of powderpuff is seeing students so passionate about something,” said Deener. “Even if it is as simple as a flag football game. Since the pandemic has started, I don’t see as much passion in school so it is nice to see students care about something again.”

“[Honestly], it’s my senior year and everything else got taken away because of COVID,” said Mackenzie Scott, West player. “So I was like, why not [play Powder Puff]?”

“I decided that since last year was taken away from many people, I wanted to come back this year and be a part of many things that were happening around me, [including Powder Puff],” said Friedle.

Excitement surrounded every aspect of the game as both players and coaches looked forward to having the opportunity to participate in this Homecoming tradition.

“I wanted to get in some last-minute senior memories with my friends,” said Verenice Aquino, West player. “I always planned on playing Powder Puff in my senior year. However, this year is special because all seniors missed out on events. I just wanted to take the advantage of being able to make some memories.”

“My goal was to make it as fun as possible for all the girls in a year that hasn’t been the best,” said Tanner Ilkow, East student coach. “I know a lot of them were disappointed that we were almost not gonna have it this year so I was glad to help set it up and make it work out!”

After a well-played game on both sides, West came out victorious winning the game 12-6.