Running out of timeouts

As pandemic continues, basketball players are stuck in a tug-of-war between state regulations and the IHSA's desire to get players safely onto the court 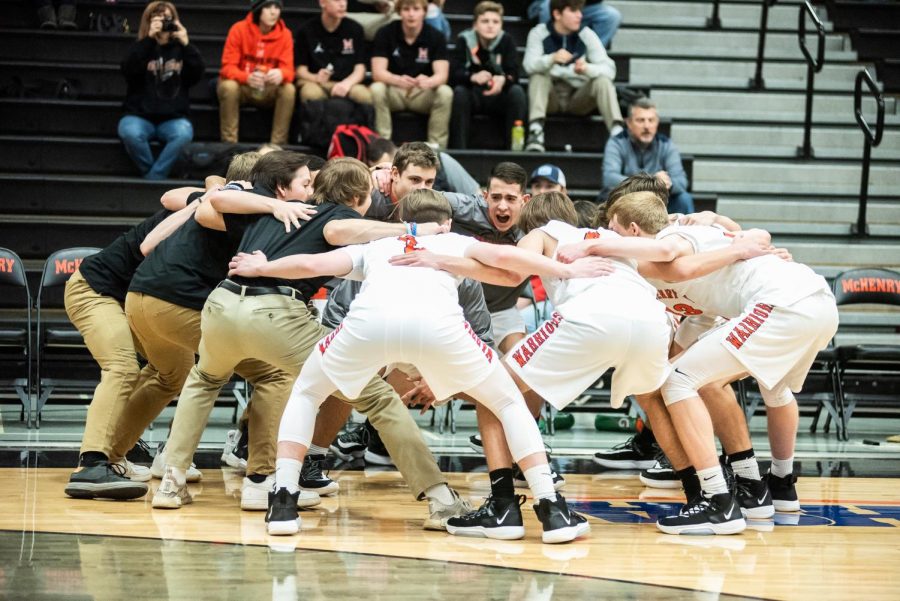 The 2019-20 boys basketball team gets fired up before a game against Cary-Grove on January 8 in the West Main Gym. This season's basketball season has been disrupted due to COVID-19 restrictions handed down from both the governor and the IHSA.

Basketballs dribbled up and down the court, sneakers squeaking from the freshly waxed gym floors, crowds cheering as another three points are scored — these were the dreams of many basketball athletes for this winter. But as of November 20, the Illinois High School Association put winter sports on hold until they reevaluated the risk of proceeding with the winter seasons on December 2.

“All IHSA sports and activities will cease by November 20 for what we hope is a short-term pause,” Craig Anderson, IHSA executive director, said in a statement. “Given the rising COVID-19 cases in our state and region, we support the governor’s mitigations and believe it is imperative for everyone in the state to do their part in following them so that we can return to high school sports participation as soon as possible.”

“Basketball being on pause sucks, everything feels weird nowadays,” says senior Brian Jordan. “Normally we’d have a Thanksgiving tournament but we didn’t have anything going on and it doesn’t feel right.”

This pause includes all open gym and conditioning sessions. Teams, however, can have outdoor workouts in groups of ten or fewer. IHSA also states that “coaches cannot organize non-school participation in any fashion.”

Illinois governor J.B. Pritzker and the Illinois Department of Public Health had put an end to medium and high risk sport back in October, pushing them to be played in the spring. However, IHSA went against these recommendations and continued on with all winter sports. With the safety of athletes being put at risk, many insurance companies would not insure the schools causing many of them to drop out of the IHSA’s season. This resulted in the calendar for winter sports being shortened significantly and pushed back to not start until February or even later.

“When school and other social interactions have been taken away, not having sports causes isolation,” said Rob Niemic, head girls basketball coach. “One thing that we must keep in mind is that, at one point, things will improve. Things may not be back to the past normal, but we will be able to get back competing and back in the schools and do other social opportunities that will exist again too.”

MCHS’s boys and girls basketball teams are prepared to begin their season as soon as the IHSA gives approval. However while waiting for their seasons to begin, the athletes have to navigate the plethora of freetime they now have on their hands.

“It has also been super challenging because now we have a bunch of downtime that we have to fill, which would’ve been spent practicing and playing games,” said sophomore Lynette Alsot. “I think that all of this downtime has not only affected our bodies and increased our boredom, but it has also affected our mental health.”

During this pause in the season, coaches have been doing their part to try and help players with their mental health by working to keep spirits up.

“I try to keep encouraging our athletes by having them plan for the future as they will have something to look forward to when things begin to normalize,” said Niemic.

Niemic has also been sending messages of encouragement to his players encouraging them to continue believing in a season. These messages impact the players and keep them going through a difficult time.

“Coach Niemic has been sending out messages and videos that keep our hope up and most importantly to remind us to keep persevering through these unique and uncertain times,” said Alsot. “As teammates, we have been staying in touch with each other, and that helps us by supporting one another and just knowing that we are there for each other.”

“We should just control what we can control,” explains Jordan, reciting advice coaches gave him these past few weeks. He says this is what all players should hear in these frustrating times, and this advice is helpful to those in shock, sorrow, or a state of disbelief.

Coaches and players still have high hopes for a future season in basketball. They are anxious to get back on the court and play hard as soon as it is safe for them to do so. In all of these decisions, the safety and health of all players and coaches have taken priority.

Additional reporting for this story by Emma Snyder.