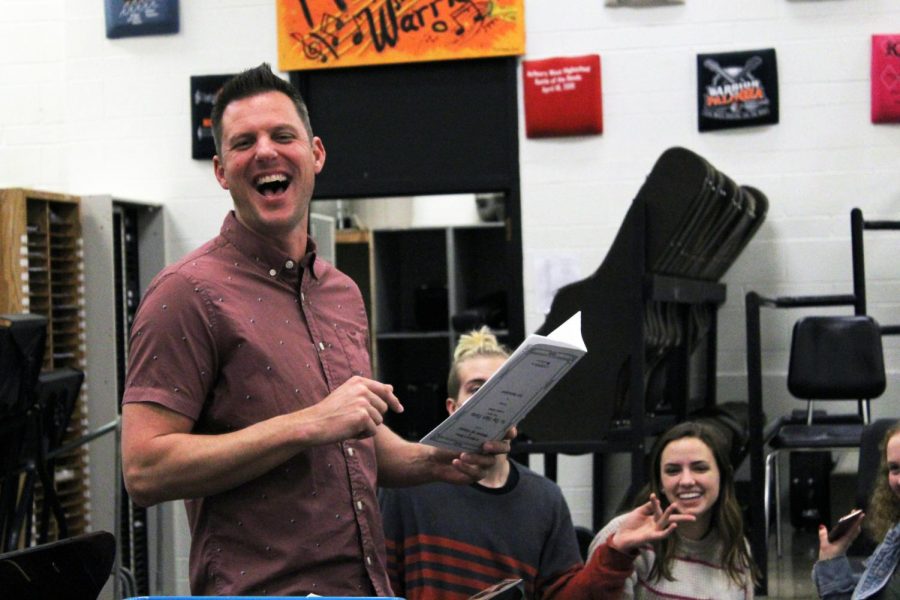 Laughing with his students, Derek Galvicius listens back to a recording with his Surround Sound students on March 5 in the West Campus choir room.

Students roaming around West Campus may hear faint singing as they approach the choir room. Students of all backgrounds and personalities feel welcomed as they walk into the room for choir. The acceptance and safety that the choir program provides for students is all made possible because of choir director Derek Galvicius who wants to make sure that people feel safe and supported when they come into the program.

Galvicius relates to the passion that his students possess for the arts. He himself had an independent, art influenced mind in his high school years, which is why he chose directing. He had no idea which arts focus his life would turn towards.

His role model in high school, his high school choir director, influenced him to be the choir director he is today. He was able to take the movements that he liked, ones he didn’t like and how he shaped them into what he directs now.

Despite having a choir director as a model in high school, Galvicius wasn’t sure what he wanted to pursue in college.

“I was a high school band, choir, and drama guy. So when I went into college, I didn’t really know what I was going to levitate towards. The more and more I did both band, choir, and all the other stuff, [the more] I just kept levitating toward the vocals. I loved being able to actually sing, and have my body be my instrument.”

“I went to Carthage College in Kenosha, Wisconsin, for my undergrad, and my master’s major was in music. It was just a music major, and my minor was education. When I left, I was endorsed by K-12 choral, band, and general music. Then I went to Northern Illinois University, and did work toward my masters.”

Since becoming a choir director, Galvicius has brought the school’s choir program all around the country and has performed at professional venues. The McHenry Concert Choir and Surround Sound have had multiple performances at Carnegie Hall in New York City.

One of his proudest moments as a director was when the choir performed at Carnegie Hall.

“One of those professional moments that I’ll probably never be able to recreate…was when I was able to conduct my high school choir, alone, on the stage for Carnegie, and have a twenty-five-minute session all by myself with those singers.”

Galvicius encourages students to step out of their comfort zone and audition for the choir program. Those not involved with the program don’t generally know what the program is about, and once they do find out, there is regret about not joining.

Even if students aren’t planning on going into choral directing, his goal isn’t to create choir directors, but create a safe place where students can express themselves safely, and learn how to truly enjoy music.

“To love music and be lifelong musicians,” he said. “I want people to love music, understand it, and want to continue singing for the rest of their lives.”

Not only does Galvicius want students to find true love for music, but he also wants to ensure that his Vocal Warriors have a place that they can freely express themselves.

“I just want to make sure that when people come into the program, they feel safe and supported…I think it’s just creating a space that this town continues to support.”

Many students who join the choir recognize a welcoming feeling as soon as they step into the choir room.

“Having it be my first year in choir, I didn’t know many people in the class,” Senior Edwin Barranco expressed. “However, everyone was incredibly inclusive and offered me help. By the end of the week, everyone knew my name and I knew their names as well. [It was] overall a great feeling, and I’ve made so many new friends.”

Some people who join choir end up realizing that it was just what they were missing and junior Orian Roman is one of those students.

“I didn’t realize how much I was missing in my life until I joined Choir,” he said. “It is such a welcoming environment that I always feel challenged in and drives me to become better every day.”

With such a welcoming and challenging environment, Roman has come to truly appreciate and love what the class has given to him.

“I have made some of my best friends there and has been the highlight of my day a lot of the time. Being a part of making music with such talented people has honestly changed my life for the better,” he said. “I think that music can do that everyone, it fills a space in your heart that you didn’t even know was there.”

Auditions for the choir program are held in April every year. These auditions are for the ensembles, [which are] Concert Choir and Surround Sound. Galvicius has a set number that he wishes to reach every year that he goes into the audition process.

“I have had concert choir be as little as 45 [students], and as many as 120,” Galvicius said, “And I have found that there is a sweet spot in the upper 80s, lower 90s. So, the goals would probably be to have at least 40 basses and tenors, with a balanced level of soprano and alto above that.”

Along with the audition process, he has ideas for how to continue growing the choir program at MCHS. He shared some of his ideas for the future, which included acapella groups and piano classes.

“I would like to create an acapella group that meets during the day, so like a male octet, a female octet, think Pentatonix but male only, female only and then a mixed,” he said. “I would also like to add a piano class, but we’ll see.”

Through his passion for choir, Galvicius has established a class that many love. With a welcoming environment, and an equally welcoming teacher, he has provided a place to make many feel safe, and explore a talent or interest inside them that they may not have known before.