The McHenry Messenger • May 3, 2021 • https://themchenrymessenger.com/squishmallows/

Squishmallows are a popular, adorable, and squish-able new toy — so why are they so hard to find? 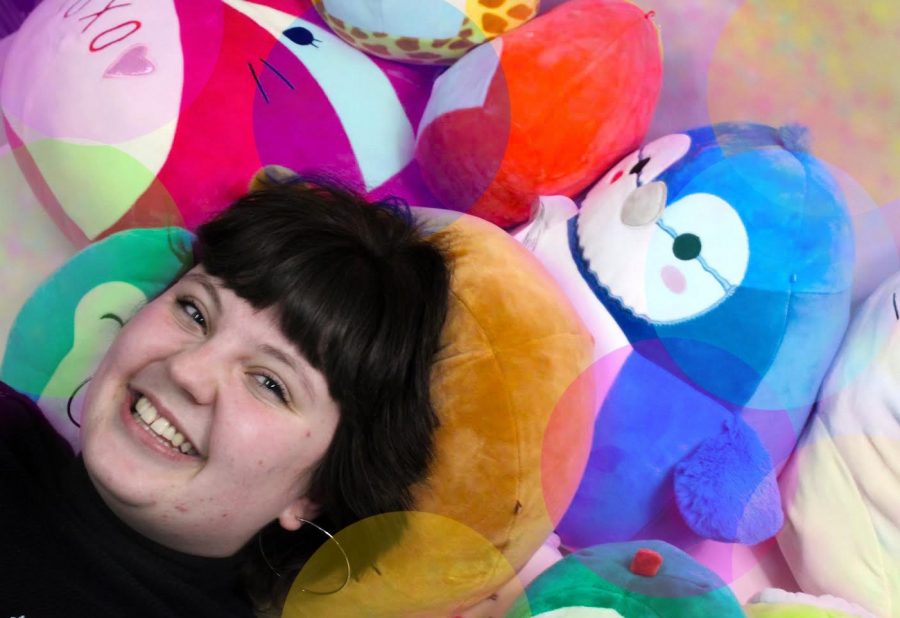 Ciara Duncan poses with her collection of Squishmallows, which have become rarer as they've become more and more collectable.

Squishmallows; what are these cute, fuzzy, squishy stuffed animals we’ve let into our hearts and homes? For me, my newfound love for Squishmallows has raised a lot of questions from my friends and family. What is the point of these adorable toys? Where did they come from? Why in the world am I spending so much money on them?

Created in 2017 by toy brand Kellytoys, Squishmallows are a kind of adorable, squishy stuffed animal that are characterized by their memory-foam-like filling. They come in a variety of sizes, ranging from 3.5″ keychains to 2′ tall monstrosities of a stuffed animal. They also come in a wide array of characters, ranging from sealife to food to zoo animals to a variety of different licensed characters, including Stitch from Lilo and Stitch, Buzz Lightyear, Marie from Aristocats and others.

For West sophomore Kennedy Tetour, her love for Squishmallows started after her eighth grade birthday. ¨My friend got me one for my birthday. My little sister had a bunch of them too and I thought they were super cute. So, I asked my mom for some, and now I have a bunch.¨

Today, it seems that everyone is catching on to how great Squishmallows really are. They’ve recently exploded in popularity after being showcased on social media app TikTok, and have been almost impossible to find in stores and online ever since. While customers are glad they’re getting the attention they deserve, it’s understandable that their newfound scarcity is frustrating.

“It’s cool that they’re a big thing now, but they’ve gotten so big that they’re impossible to find,” says Tetour.

Now that they are so hard to find, customers are having to get creative in where they can find and purchase Squishmallows. This has included buying them from online resellers, joining ¨Squish Groups¨ on websites like Facebook and Reddit to track which stores are selling what Squishmallows and when, and scouring storesfronts and websites day and night for restocks of these desirable plushies.

Their rarity has caused them to become somewhat of a collector´s item; certain desired and rare Squishmallows can resell for hundreds of dollars, and large collections are praised or sought after by other ¨Squishmallow Hunters¨ as they´re called.

Still, this does not answer the question of why exactly Squishmallows are so popular. As it would happen to be, that answer is different for everyone. Tetour enjoys them because ¨they’re cute, and they’re also really comforting because they´re just so squishy.¨ Resellers enjoy them because they´re a money-making opportunity. Certain fans enjoy them simply because they´re nice to look at on shelves, while others would much rather have them snuggled up in bed.

As for me, I know that these stuffed animals are just another new trend that I´ve gotten way too invested in. I have no plans of selling them for profit or keeping them nice and neat on my shelves; after all, I have way too many for that. I just know that these lovable toys make me happy. During a time like quarantine when I haven´t always been able to be close with my loved ones, having a soft, sweet, squishy animal to hug has been a blessing, and they really do give the best hugs.

When I began quarantine, I never expected that by the end of it, my bed would be overflowing with Squishmallows. But alas, as I write this article now on top of a pile of adorable, squishy mammals, bugs, fruits, and sealife, I couldn’t be happier that I’ve found them.