With a mission to promote positivity at West Campus, Student Council plans and organizes and week to build community among students 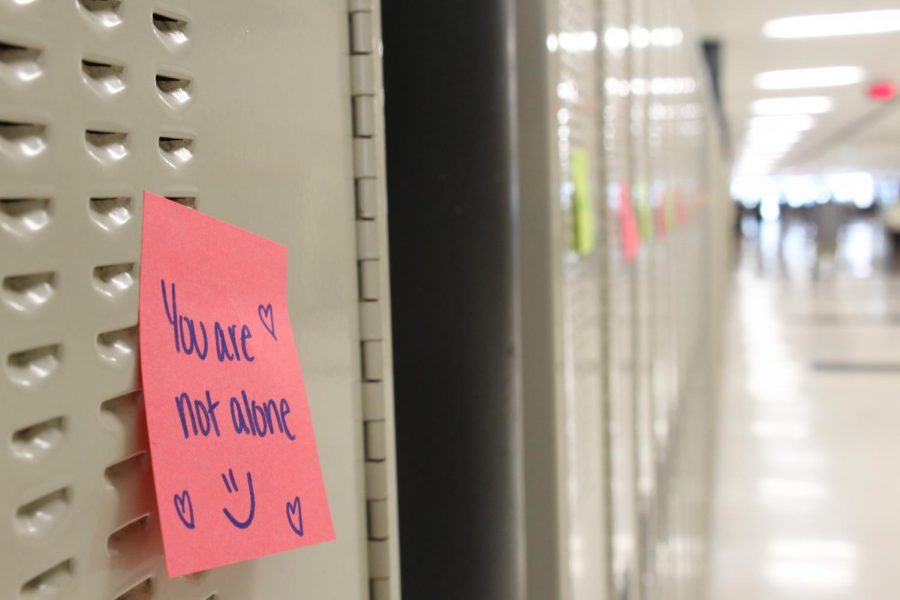 A note on a locker in the hallways at West Campus promotes Start With Hello Week, an initiative promoted by Student Council to spread positivity during the week of April 5.

On April 5, West Campus’s Student Council kicked off Start with Hello Week, an initiative to promote positivity at MCHS.

“The main goal of Start with Hello Week is to ensure that all students feel like they have a place here and that they are not alone,” said Jessica Grens, StuCo advisor. “It is meant to promote being kind to one another, saying hello to people you don’t know, and being more aware of what others might be going through.”

Start with Hello is a program created by the Sandy Hook Promise, a nonprofit organization that was created after the fatal school shooting at Sandy Hook Elementary School in Newtown, Connecticut in 2012. They are dedicated to “end[ing] school shootings and creat[ing] a culture change that prevents violence and other harmful acts that hurt children.”

“The Start With Hello program brings attention to the growing epidemic of loneliness and social isolation—which often leads to bullying, violence, and depression—and teaches young people how to create a culture of inclusion and connectedness,” states the foundation’s website.

Throughout the week, StuCo has brought this initiative to life at MCHS by fulfilling small acts of kindness toward the student body in an effort to encourage them to do the same.

“The small things matter,” said Emily Gaghan, StuCo vice president. “You never know what someone is going through. You could be the reason that someone went from having an awful day to an amazing day just by a comment or small gesture.”

They passed out small treats and wrist bands to students each morning as they walked into the building, hung notes of positivity and encouragement on each locker, and challenged students to extend small kindness to their peers.

“I have seen on social media and have heard from teachers wonderful things about the week and the impact it has had on our students,” said Grens. “On the District Facebook [page], a parent had commented how excited her freshman student was to receive a lemon head and sticker the first day back of full, in-person learning. Many teachers have commented on how wonderful the sticky notes are in the hallway.”

The Start with Hello Week initiative was originally brought to MCHS by last year’s graduating class, who wanted to take action and bring more positivity and community to West Campus.

“A few seniors from last year came back from the Rotary Youth Leadership Awards camp and after discussing with students from other schools, they came to a realization that our school was lacking a sense of connectedness,” said Richelle Abano, StuCo president. “After bringing attention to this problem, they brainstormed with [West assistant principal Terry] Fitzgibbons and coordinated a small committee of students to implement this week in hopes to uplift the school’s atmosphere.”

“Many of the seniors who began this initiative graduated so we took charge of it hoping that we could motivate students a little more or slowly make everyone realize that each and every person at the school is valued,” added Abano.

This year, StuCo wanted to continue the initiative and, once again, host Start with Hello Week at MCHS. It became especially important after students and teachers were isolated for so long due to the COVID-19 pandemic.

“I think it is important to promote positivity at MCHS every year but especially with the pandemic,” said Sarah Doherty, StuCo treasurer. “It has been so hard on students, whether that be digital learning or if they are seeing personal effects from COVID. I think that having a week celebrating positivity and reaching out helps bring positivity back into their life.”

While StuCo has dedicated this week to building community, connections, and positive energy, their goal is to make an impact on the student at West Campus. Their mission is that the students take this Start with Hello initiative and pay it forward in small acts of kindness.

“I hope people take away from this week the value in reaching out to someone to say hello and that they are encouraged to spread positive energy throughout the school,” said Doherty. “Not only do we want this week to be positive, but we hope that every week from then on is positive.”

“Hopefully, it will continue to be a tradition because it provided me and many others a perspective on how a few small actions could make a great impact on someone else’s day,” said Abano.