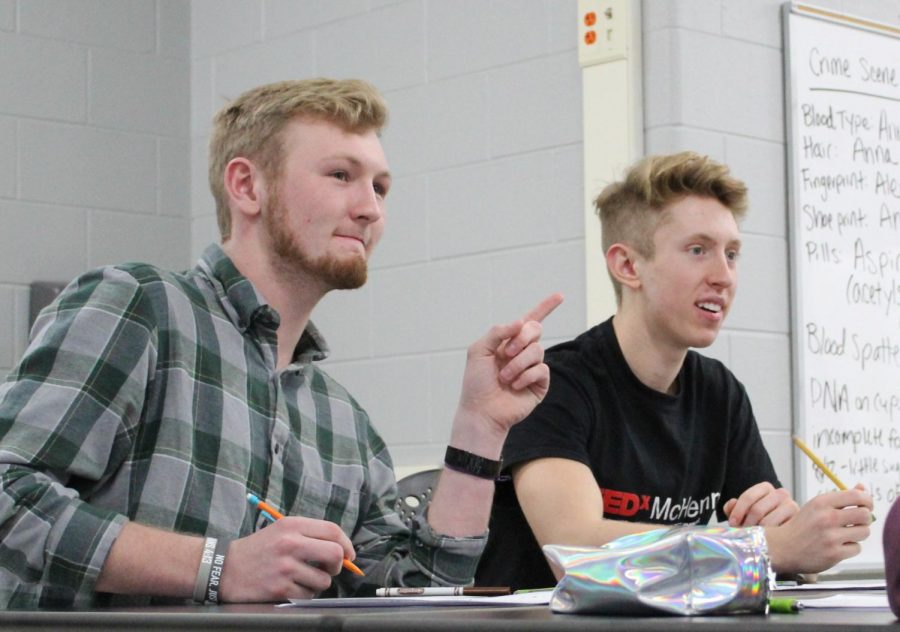 Austin Lichtenstein and Caleb Schopen contribute ideas to the first TED-ED meeting at East Campus on January 14. The new club will provide students opportunities to create and perform their own TED Talks.

The TED-Ed Club is focused on empowering students to share and create new ideas. During the weekly meetings, students will work through guided activities and collaboration to develop their own TED talks.

Designed by TED (which stands for Technology, Entertainment, Design), the TED-Ed Club is a worldwide program that “…supports students in discovering, researching, exploring, and presenting their big ideas in the form of short, TED-style talks,” according to the organization’s website.

Leah Pelletier, East Campus science teacher, and the TED-Ed Club advisor said that the TED-Ed Club, “will help [students] to share [their] idea with the world and bring [them] into a community of inspired and change-making young people”.

Pelletier explained that students will learn to identify the elements of a good idea, think critically about concepts they are exposed to, shape their ideas into TED-style talks, and effectively share them by being a part of the TED-Ed Club.

The TED-Ed club was brought to MCHS because of the successful TEDxMcHenry event last April, which is set to return on April 18 this year. Both Dylan Qualls, a 2019 graduate, and Caleb Schopen, current junior at MCHS’s East Campus, gave TED talks at the event. The speakers’ great ideas inspired Pelletier to bring the TED-Ed Club to MCHS.

“These two performances were some of my favorite parts of the entire event,” said Pelletier. “[Qualls and Schopen] stood right next to the professional speakers who were three times their age! It made me think about what other amazing potential is untapped in our MCHS students”.

The club will give students the opportunity to perform their TED talks in front of an audience. This will allow them to gain confidence and share their ideas.

Schopen, who attended the first meeting on Tuesday, said, ”I’m interested in the club because public speaking is something I’d like to do in the future, so the more practice I can get the more prepared I will be.”