The protest that wasn’t

In protests planned at MCHS and across the country, students send the message that they are sick of wearing masks in school — even when the demonstration doesn’t happen 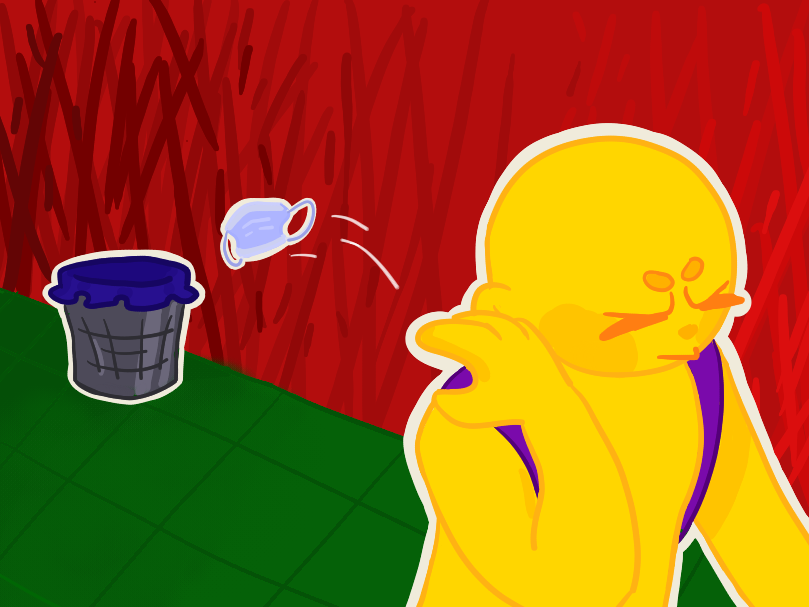 After an unprecedented school year in 2020-21, many students were hoping to ditch mask-wearing this year. Though a September protest planned at MCHS was poorly attended, others might be planned later in the school year.

An MCHS student opens up their Snapchat on September 9 to a story shared by their classmate. A student was planning to protest the use of masks at Upper Campus. Some students showed their support for the idea even, as others argued about the importance of masks.

On August 26, Governor J.B. Pritzker reinstated the mask mandate in Illinois that made the use of masks mandatory in indoor spaces. Although mask wearing has been required at MCHS since the beginning of the school year, many students were upset at the new mandate.

Protests against mask wearing in schools have swept the nation since early September. At the Upper Campus, one of these protests was organized. Senior Cruz Basulto attempted to exercise his First Amendment right to peaceful assembly on September 10.

“I felt like my voice wasn’t getting heard,” Basulto says, “and I just dislike the masks and I’m tired of them. I know a lot of people were [tired of them], so I started the idea of making a protest.”

With all the protests going on in the United States regarding masking, Basulto was inspired to make his voice heard.

“I saw a protest with a Colorado high school,” he says, “and I just thought of the idea because if there’s more schools doing it, I feel like it’ll definitely really come out and get heard.”

Basulto is aware that a protest won’t get rid of the masks, as it is a mandate. What he wants is for his voice to be heard — and to know that others stand with him.

“Everyone was saying I was trying to get rid of the masks and all that,” he says. “That is a goal I have, but it wasn’t for that because [mask wearing] is a state mandate. I was just trying to get my voice heard and to see who else would stand up with me.”

Some students were quick to point out that masks are helpful for the immunocompromised and those who can’t get vaccinated.

Basulto admits that masks are better than online school, but at the same time he says that masks can be a nuisance and that it can be difficult to breathe. He adds that there is no point in being required to wear masks if it isn’t enforced.

“What’s the point of wearing them when the teachers let us put them right under our noses?”

As word spread around of Basulto’s protest, news got to Upper Campus’ Principal Jeff Prickett who was willing to help students organize the protest in a way that wouldn’t break school rules.

“The principal came up to me personally and asked me when we wanted to get the whole thing going,” Basulto says “and we could do it peacefully instead of just walking out and getting marked tardy or a detention.”

At the same time, Prickett released a statement discussing the mask mandate and the repercussions for not following the mandate.

“I know we are all tired of COVID and mask mandates,” Prickett wrote, “but we have no choice but to follow recommendations and requirements from the Governor, Illinois State Board of Education, and public health officials.”

He adds, “I want you all to be aware the consequences for non-compliance are real. I would never put our district in a situation that would have us violate the law.”

Masks might be bothersome, Prickett says, but they are what allowed for the return of students and staff to in-person school this year. It is mask wearing that allows Upper Campus to have IHSA athletics and events like Homecoming.

When the day of the protest arrived, almost no students walked out. Basulto wasn’t in the protest as he had an appointment that he had forgotten about. However, he is determined to make his voice heard.

Mask wearing can be a hassle and many are tired of wearing masks, but they are not going away any time soon. As cases of the COVID Delta variant rise, more and more states are putting mask mandates in place. This has angered many across the country, with many protesting the use of masks.