With the absence of the MCHS band director, students, parents, and teachers, take on the challenging role 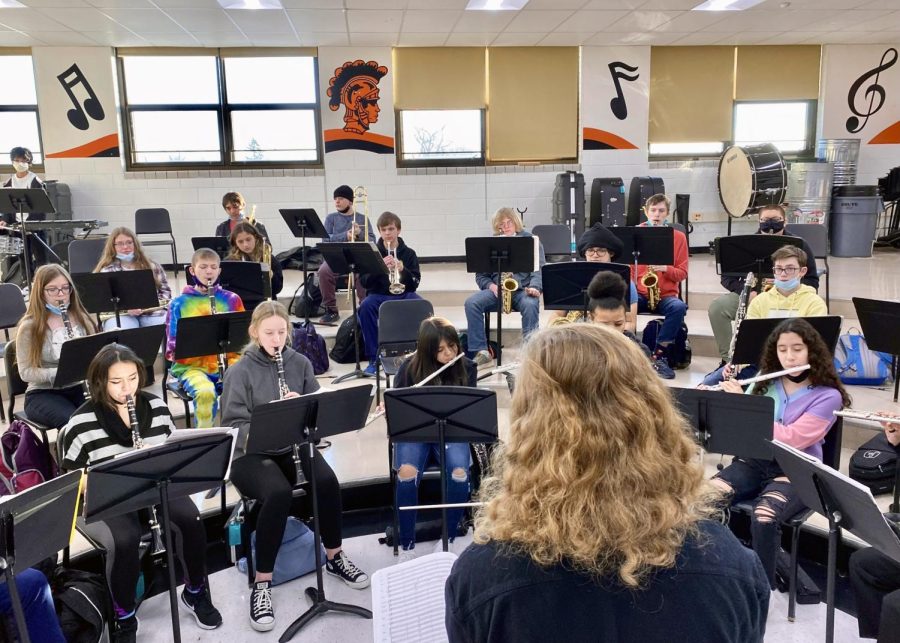 Freshman Gavin Wuchter conducts first period Concert Band at the Freshmen Campus on January 21. Wuchter stepped up while the district found a replacement for MCHS's director of bands, who left at the beginning of second semester.

Freshman Gavin Wuchter waves his conductor’s baton back and forth while preparing the band for the piece “Critical Mass.” While flutes play a soft melody, clarinets and saxophones float beneath.

Due to the absence of band director Alyssa Arkin, students such as Wuchter and Jianna Thorne stepped up to help lead the band, along with fellow MCHS staff members.

At the beginning of the second semester, Arkin resigned, meaning there was nobody to direct the bands. Arkin had already been gone for a couple weeks so students Wuchter and Thorne, from the Freshman Campus, stepped up to the plate, and directed the band for two weeks.

Substitute director Tracy Tobin says, ¨Well, there are a lot of things that go on in band other than just in the classroom. There are all the regular duties of a substitute teacher and then there are the extras like our students participating in the McHenry County Honor Band and the upcoming New Trier JazzFest. In order to continue to grow as musicians, a lot of contacts had to be made.¨

Going to and from the middle schools and high schools can be difficult, especially when there is no free time.

¨Traveling between middle school and high school wasn’t stressful, but I will say it was a hustle. My schedule changes daily at MMS,” explains Paul. “In order to make the Symphonic Band rehearsal work with my schedule, I had to cancel some of my classes and lose my planning and lunchtime. Each day I run out of MMS to get to the high school on time, and then after rehearsal left immediately, ate my lunch in the car, and ran back into MMS to teach straight through the rest of the day.¨

That’s not the only teacher that got affected by going in and out between middle school and high school.

Berens says, ¨Wind Ensemble fits perfectly in between my sixth and seventh/eighth grade bands. Unfortunately, I’ve had to cancel my 6th grade lessons to be there, but there’s enough of a window that making it back and forth isn’t too stressful.¨

As soon as Arkin left her position, District 156 administrators began to seek out a replacement. There is a lot to go through when hiring a new band director.

Megan Bennett, Division Chair of Fine Arts and World Languages, says, ¨The first step is to post the position, which lists qualifications, requirements, and a description of our district and program. As applications are submitted, an administrative committee reviews the applicants’ submissions to decide from which ones they would like to hear more.”

“At that point,” Bennett adds, “a portfolio is submitted by each and, after review, in-person interviews are recommended for a narrower field of applicants and they are brought before an interview committee. The committee then decides who the top candidate is to recommend for hire.¨

Cabildo says, ¨The staff and students alike have been so welcoming to me already, and it was immediately clear that everyone has worked hard to create an environment where people support one another and work hard to do their best. There are also a plethora of unique and fun experiences available to students to help them grow. I could not be more excited to be a Warrior!¨

As Cabildo directs Upper Campus, waving his hands before the Symphonic Band and getting the band set up for warm ups. They start with tuning then go through scales to warm up so that they are prepared for the rest of class — and the rest of of the semester.