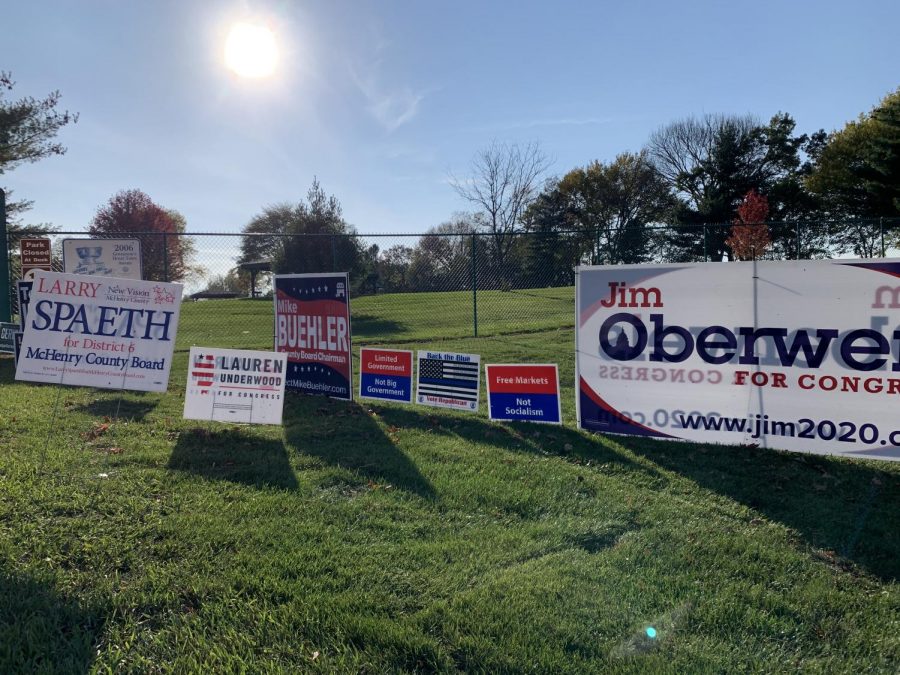 Signs for local Illinois elections advertise candidates for senate, county board, and other national causes. First time voters around the country cast their ballots in this historical election on November 3.

This year has included many firsts, and for many seniors at MCHS, this has included their first time being able to vote in any presidential election.

Most Americans considered this year’s election as the most important election of their lives. According to the US Elections Project at the University of Florida, prior to election day itself, 99 million citizens participated in early voting. These early voters alone add up to just shy of three-fourths of the entirety of voters that participated in the 2016 election.

Among these new voters are fellow students from MCHS, including senior Emily Gahgan, who stated that she has an array of reasons to vote—and that she also hopes that others her age did too.

“I know this may be the most cliche answer, but I am voting because I want to contribute to my country. I believe that if you do not vote, then you cannot complain about the outcome.” Gahgan added, “I want to participate in these political events because we live in a democracy and people need to vote to make sure our voices are heard.”

Many seniors at MCHS that were eligible to vote decided against it, including senior Aubrie Hocin. “I’ve decided to not vote this year because I have been struggling with who to vote for, and I have different stances on different issues.”

Hocin further explained that she believes this election is disheartening in it’s division of our country. “I think the current situation is childish, and not the way the Founding Fathers wanted elections to be. I also think it is sad how much of a divide has come from this specific election.”

Gahgan seemed to feel the same, stating, “I am truly devastated seeing the conditions of our political parties today. Personally, I am invested in politics and would like to be able to have a civil conversation about the candidate’s policies without being belittled for my beliefs. It seems that one cannot associate themselves with one political party without then being associated with all of the unpleasant stigmas.”

Gahgan continually spoke on how she takes consideration for both sides before deciding what she believes is best for both her country and herself.

“As a mature and confident adult, I do see the benefits and drawbacks of both parties. Nevertheless, I associate myself more with the right side due to my utmost admiration for the American worker.  Ultimately, when it is time to vote, the candidate who has the best interest of our country and it’s people will have my vote.” Gahgan states.

When Hocin was asked, she once again kept it short and simple and stated that she was “settling for Biden”.

Both of these students were able to shed light on the importance of respectful political discourse, and how the students of MCHS can have similar yet differing opinions at the same time. According to Gahgan, this means everything in a democracy.

“I believe that in order to start growing as a country, the parties need to work together instead of against each other.”

This years election proves that candidates clashing heads is not what the voters want, rather the two working together to make the country needs.