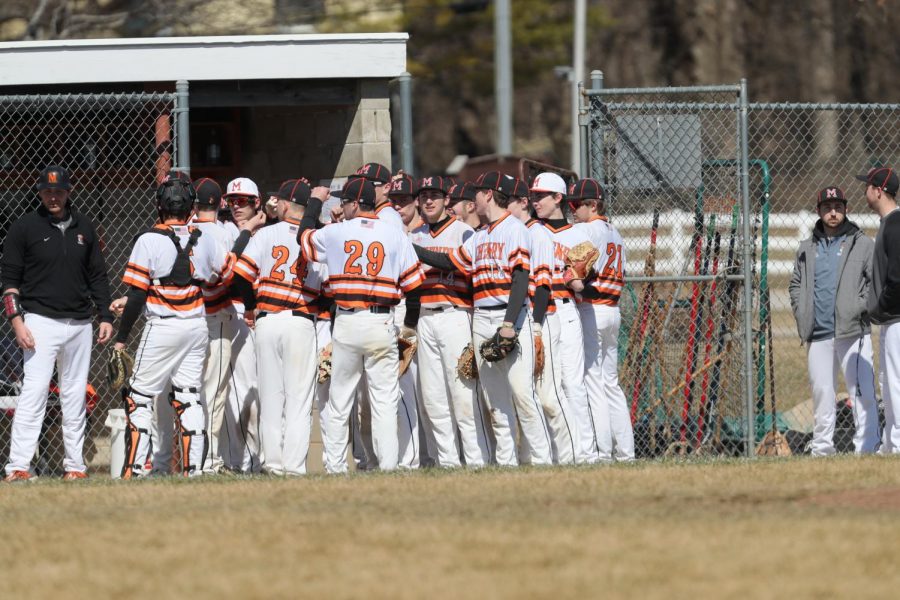 Varsity baseball players cheer for each other before a game during the 2019 season — the last season that the team played. Though COVID shut down last year's season, this year's spring sports will play — just a shorter season that stretches into the summer.

As weather gets warmer, many athletic teams that typically play in the spring — including baseball, softball, boys tennis, track, lacrosse and wrestling — are beginning seasons that will stretch into the summer. Though some teams will be able to reach new successes, others might struggle due to the heat.

All IHSA sanctioned high schools will be participating in summer season. According to Kyle Funkhouser, the varsity boys tennis coach, all schools in the county and surrounding areas will be playing the same season. Although, currently not every game or practice is finalized, but it will be figured out soon as the seasons begin.

For many of the teams, the season is proceeding as normal, other than being a little shorter than usual and a different time frame. “The end of our season has only been extended by one week,” explained Brian Rottweiler, a baseball coach for MCHS. “We have lost about a month off the start of the season.”

As a result of the season going on a couple more weeks later than usual it will overlap with summer school. Each team is planning to work around this. “To deal with summer school we would just adjust our practice times so athletes can attend summer school and then come to practice,” explained Brad Robertson, the girls lacrosse coach. “All athletes are students first athletes second so we put emphasis on school first.”

Every student will have a chance to participate in sports and school over the summer. According to Matthew Biell, the boys lacrosse coach, they will work around summer school the same way they work around people who have jobs during the season. Athletes should expect to have there schedule remain as planned.

Since every teams season has been moved around in some shape or form, some season are going to be overlapping. “The delayed start does bring up some new struggles though,” stated Kyra Lard, a senior softball player. “Some of the players who are in volleyball and softball will have overlapping seasons and this will most likely affect our team at McHenry as well as other teams in Illinois.”  With having seasons over lap it can make it difficult to get consistent numbers, and then players have to choose one sport over another in some cases.

However, now, many of the MCHS summer season sports have had many more days to work together than they have had in previous years. When the start of the season got pushed back, teams got more time to prepare.

“The time given to us for contact days has definitely helped us get better skill-wise,” explained Charlotte Alexander, a freshman softball player, “and it’s also allowed the program to work on chemistry and trust, which is so important heading into a season. I’m much more comfortable going into this year’s season than I would’ve been if we hadn’t been given these practice opportunities.” This has also given players to become more confidant and comfortable around each other.

Another benefit of having seasons in the summer is the weather. For the outdoor teams playing in the winter conditions can be miserable, but now for the majority of the season the teams will be in nice warm weather conditions.

“I think the summer weather will have a much more positive impact on athletes marks and times,” said Raegan Stinger a senior on the girls track and field team. “In colder, rainier weather in the spring, it sometimes gets hard to compete because the weather can freeze the muscles up and slow you down. The summer season will help athletes exceed and be able to get the times and marks they want without the setbacks that the spring weather brings.” Warmer weather can and will lead to better performances.

The summer season is benefiting a lot of teams, such as the softball team. Since they are starting at a time and weather season than usual, they will have almost completely different playing conditions.

“The dirt of our field is frozen still or too soft because of rain/snow around this time of year,” stated Mikaela Mitsch, MCHS’s varsity softball coach. “This is a big positive for us that our season is moved back to the summer season. We have a better chance of getting warm weather and not having to wear sweatshirts for every game!” With warmer weather teams might struggle less with weather issues.

While the summers heat is really beneficial to other sports, a lot of sports are going to have new arising problems. “This season is going to be a challenging one for most teams because of the heat of the summer,” said Ryan Hephner, a senior lacrosse player. “Some of us have played summer lacrosse on the travel teams so we will have an upper hand, but it still remains a fact that the heat really impacts the stamina and energy levels of a game.”

As all this years summer season sports teams begin their season, the players get more eager to play. While most teams are looking forward to the new weather conditions during the new season time frame, some are dreading it. But most athletes are just excited to have a season.