The McHenry Messenger • May 12, 2021 • https://themchenrymessenger.com/yes-were-open/

COVID-19 effected everyone in the United States, but in different ways — particularly local business, who are still feeling the impact of last year's shut down 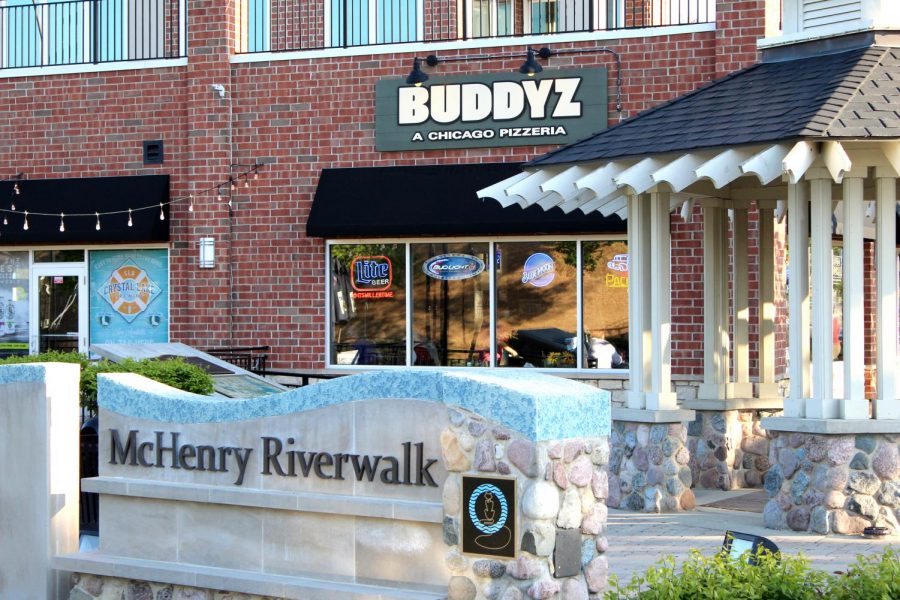 When COVID hit in March of 2021, businesses were hit particularly hard. Local businesses like Buddy'z have worked hard to attract business in the year since the shutdown.

The global pandemic’s year-long reign has managed to seep its way into the family-owned businesses of the city of McHenry, many of which closed after during the virus’s spread and non-essential businesses were temporarily closed at the end of March 2020.

During this time, the town needed relief and the town received a helping hand. Business owners received loans, the people of McHenry purchased and supported their local businesses more than ever before, and the restaurants, boutiques, family-owned businesses were all the better for it.

But in the prime of the COVID-19 pandemic — March to June 2020 — businesses had to radically reorganize themselves to better fit the ever changing world around them.

One way McHenry businesses handled the virus was to see the shutdowns from another light. According to Allison, a server at Buddyz in downtown McHenry, “It helped that we were closed for a while, so I think that gave us time to give us time to prepare for when things would get back to normal.”

“And then,” she adds, “by keeping us [closed], we made sure we wore masks and follow COVID regulations.”

The Black Orchid, a family ran clothing boutique on Green Street, also used their shut down time to their advantage. Co-owner Carol, created webstore, a Instagram presence, and a Facebook page. “We had an online presentation where I showed the items and people could say I want a small, medium or large, and then they would pay us online. And we did that, till we got to be open again.”

“It pushed us to go to the 20th 21st century, because we were old school,” she adds. “We did everything by people just coming in, and to survive, we had to do an online store.”

The pandemic forced businesses to completely change their regular practices. The McHenry Downtown Movie Theater, for example, knew the pandemic had no end in sight. Because of government restrictions, no customers would be able to watch a movie in theaters, so the Movie Theater brought the movies to the peoples homes.

“When COVID happened, we had to completely shut down,” says Grace, a manager at the theater. “One idea we had was to provide popcorn deliveries. So we made a box that has popcorn and pop and candy and it gets delivered to your house”

Where the movie theater brought candy and snacks right to the peoples homes, Jetts Heating and Cooling had the opposing challenge: providing maintenance on homes without going inside. Aaron, a salesman at Jetts Heating and Cooling, said, “Some people did not want us in their homes at all. So when the lockdown first hit. We were doing a lot of the air conditioner cleanings, from just the outside not actually going inside. [Once] people became more and more comfortable, we were hand sanitizing before and after every job. Just making sure we needed to do whatever we needed to do to help control as much as we could. We were lucky COVID did not come into the building at all.”

Schopen Pest Solutions ran into the same problem. They were also unable to go into peoples’ homes — and in a field where going inside homes is crucial to business.

Owner Pete Schopen stated, “we had to be just aware and conscientious of our clients feelings. So we wore nitrile gloves. We wore masks. All of our trucks had sanitizer in them. When our guys would come in, in the afternoons they’d have to scrub down their trucks, just like you would at a restaurant. Here in the office, all of our office personnel, we had to wipe down all the door handles and everybody had to wear masks when they would visit someone else’s office.”

“When we had that second wave of COVID cases,” he adds, “we had a lot of people that just didn’t want us in their homes or, or they were sick and we didn’t want to be in their homes. We were just trying to be proactive so we stayed open.”

Local business have different perspectives on how the city of McHenry has handled the pandemic.

Aaron from Jetts Heating and Cooling — a business owned by McHenry’s mayor Wayne Jet — said, “I think they’ve handled it very well. You know everyone came together right away. There were a lot of people willing to help each other. Us personally, we volunteered all of our time and labor to help with this vaccine center, —which, you know, we’re all very proud of. But I think as a community, everybody, everybody handled it well, came together and, you know, made sure we were doing everything we needed to do.”

“Mayor Jett, really worked hand in hand with a lot of restaurants and bar owners to see if they stayed open in some capacity,” Schopen stated. “So I think the I think our city has done a fantastic job of helping other businesses.”

After McHenry was allowed to open up, Grace at McHenry Downtown Theater said,  “we’ve kind of shifted and we started providing live events. So we’re doing comedy shows and magic shows and dueling pianos to provide another thing for people to come do. … We’re supplementing with our live events to try to bring in more people and be like ‘hey we’re open we’re here, remember us’ you know, so we’re just trying to get people like coming back.”

At the start of COVID, the Hub Market was booming. Other stores were often out of stock on meats and the people of McHenry looked for more local businesses to buy their product.

“When the grocery stores started running out of chicken breasts, ground beef, hamburgers, hot dogs,” a representative from the business said, “people were looking for other places to get meat, and we picked up a ton of customers through that. It was probably the greatest chunk of advertising or marketing that we could ever have. And we just started placing panic orders, because people would want 25 pounds of chicken breasts and 50 pounds of ground beef. We just gained a huge customer base.”

“With the restaurants closed people have found us,” Hub Market concludes.

“We were able to get a hold of masks, hand sanitizer, was a little tricky,” Aaron from Jett’s Heating and Cooling says, “but business-wise, it actually didn’t slow us down at all. In fact, I think it helped in a lot of ways. People were home, they were focusing on stuff they needed to do in their homes. And then once the stimulus packages hit, we’re using that money towards home improvement and kind of stuff the stimulus packages are supposed to be used for. But, you know just adapted to what we needed to do and overcome any obstacles and just kept going.”

And keep going the businesses of McHenry did. Schopen Pest Solutions business was up double digits last year. “And once we came out of the holidays,” Schopen says, “we’ve been doing really good. … We’re almost recession-proof, honestly. If someone sees a mouse in their house, they’re gonna freak out”

To keep on going, Jett’s Heating and Cooling stuck to their motto: “Our customers’ care is our number one goal.”

But, if businesses survived, it wasn’t because of government or business strategies. It was because their customers.

“It’s not up to us as business owners,” Carol from the Black Orchid says. “It’s up to the public to support the local businesses, and this town has been really supportive. They were shopping here, we really appreciate the people who came and shopped local. I think it made everybody aware.”

And more people shopped local than any year in the past. “This year,” Carol concludes, “I think was the best year for small businesses by far.”