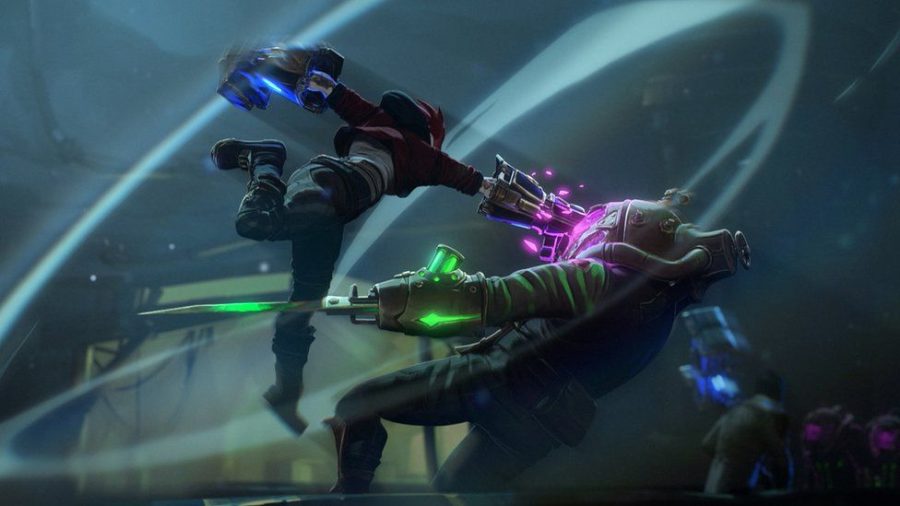 Arcane shows bright colors and a beautiful art style accompanied by a dramatic story line to keep you occupied.

Dystopian family drama, a battle with oneself, and a debate of morals are things that make “Arcane” such an amazing show. “Arcane” was released in November 2021 in three acts, the first being released on Nov. 6 and the last on Nov. 20. Based off of Riot Games’ “League of Legends”, the show follows Jinx, a well known and loved champion from the game.

Act one introduces Powder and her family’s struggles in the Zaun Underground. Powder and her older sister Vi were orphaned at a young age. Taken in by Vander, a buff Australian man who serves as a father figure for the girls and a leader for the underground city.

Acts two and three show the development of Powder and her twisted mind. The new evil overlord of the Zaun Underground Silco takes up the task of serving as Powder’s father figure and ultimately encourages her to take on a new and much darker persona, Jinx.

The art of “Arcane” is some of the best animation I’ve seen in a very long time. The attention to detail is spectacular and the art is incredible. The show took 6 years to complete and it is very obvious that the extra time paid off. Every shot is beautiful and detailed, it looks almost like it was painted which provides a very sophisticated and sometimes dark tone.

In addition to the art, the music is incredible. The theme song, “Enemy” by Imagine Dragons is such a perfect fit for the show and the character of Jinx. I’m not usually a huge fan of Imagine Dragons, but this song is genuinely incredible and will get stuck in your head. Other songs on the soundtrack help to build a futuristic pop feel that adds to the overall tone of the show and make it feel like you’re listening to Jinx’s personal playlist.

The beautiful art, music and story line all make “Arcane” an amazing show for viewers to dive into this winter. With only 9 episodes, it’s easy to binge but oh so sad to finish. Season two is in the works but, considering how long it took to make season one, it might be a while before season two can be expected. Even if you aren’t a fan of “League of Legends,” “Arcane” is still an amazing show and one hundred percent worth the watch.

“Arcane” is available to stream on Netflix.