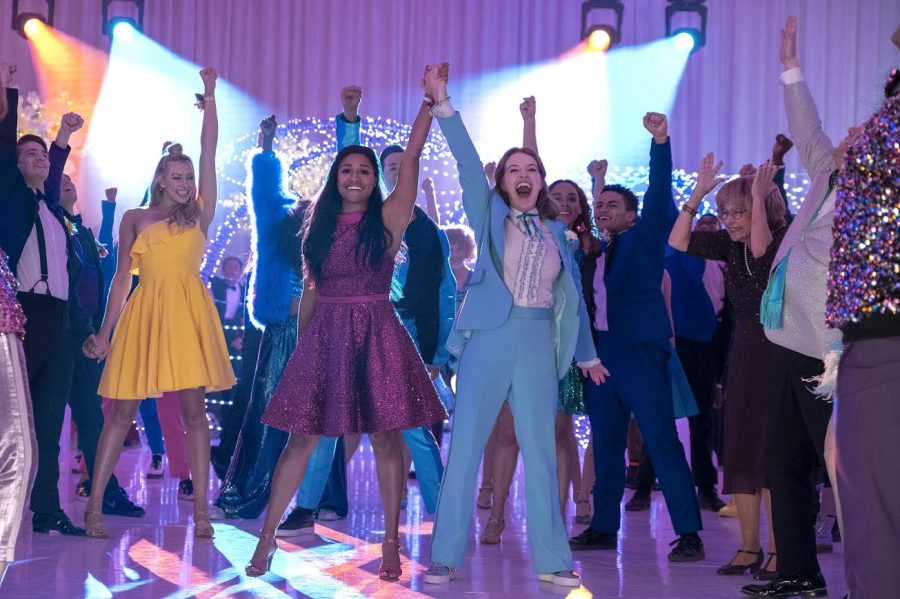 Netflix’s 2020 movie “the Prom,” which came out Friday, is about a girl who can’t go to prom with her girlfriend—until a group of struggling Broadway actors decide to help out.

In Netflix's "The Prom," two kids fight for the right to attend prom even though their town disapproves

“The Prom” is a 2020 Netflix film adaptation of a 2018 Broadway musical about an LGBTQ+ girl, Emma Nolan, who was not allowed to attend her school’s prom with her girlfriend due to discrimination from parents and other students in her community.

The Netflix original version of this musical stars Broadway stars Andrew Rennells, Kevin Chamberlin, and Meryl Streep, along with new stars such as Jo Ellen Pellman who plays Emma.

The movie just came out December 11 and has already received a lot of criticisms and I’m not quite sure why. The music is upbeat and fun, the visuals are bright and lively, and the acting is great, not including James Cordon who I have a deep personal vendetta against. When talking to family and friends about their thoughts on this movie, they said that they overall enjoyed it, and it seemed to have made them happy to see a broadway show in movie form since live theater can’t happen right now.

One of my favorite things about this movie was the use of color. I tend to like things that look interesting and grab your attention right away, so between the bright backdrops, the flashy wardrobe, and the random dance numbers, you definitely will not be staring at your phone 10 minutes in.

The most important thing about this movie is the overall theme of acceptance. Emma is a young girl who just wants to be able to do normal teenage activities like everyone else, but it takes a group of struggling broadway actors to try and make that dream a reality for her. It shows that young members of the LGBTQ+ community are often treated poorly simply because of their sexuality or gender identity, and spreading a message of hope to those kids is really important.

“The Prom” is available for your streaming pleasure on Netflix.