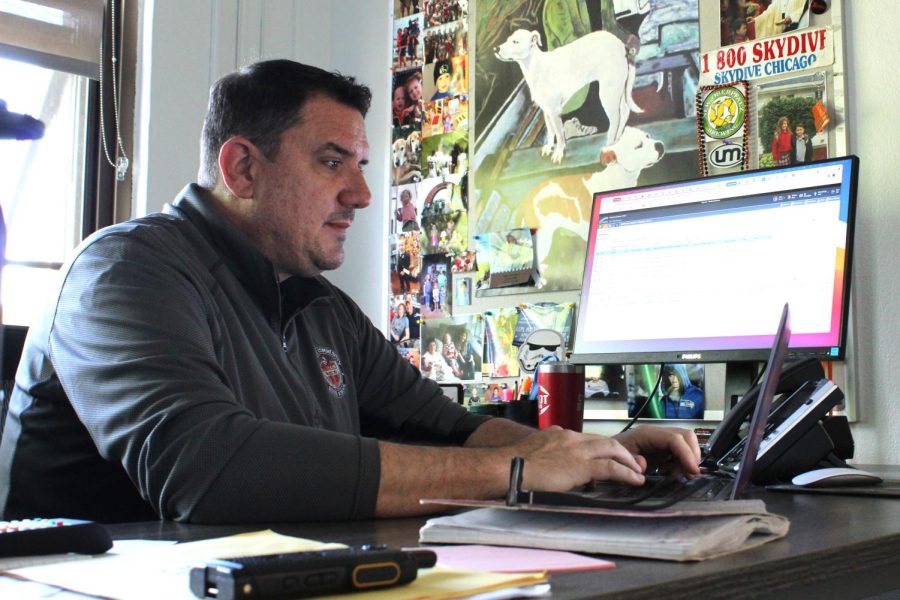 Pete Byrne, the dean at the Freshman Campus, believes that consequences for student behavior should come from the school and home. He says that tickets could encourage parents to play a more active role in helping correct misbehavior.

While MCHS has two resource officers through its partnership with the McHenry Police Department, the individuals addressing most behavioral issues are the three deans of students.

“The McHenry Police has someone stationed here for the same reason you might have someone stationed at a mall or … anywhere where there’s a large population of people, like a concert,” Dean Hilary Agnello said. “It’s supposed to be a deterrent. If you were at a concert and [the police] saw underage drinking, the police would do the same exact thing they do in this building. It’s a public place. [Sam Shafer, Upper Campus’ SRO] just happens to be stationed here.”

When deans address behavior, issuing a ticket is not always the first option — or an option at all. Different behaviors and their severities receive an appropriate response.

“[Referring someone to the SRO] depends on what the student is doing,” Agnello said. “I include Officer Shafer into discussion when I know the action would violate the law outside these walls. I know that if a kid has drugs on them outside these walls, they’d be ticketed. Same thing [here]. In the same token, I don’t refer [a student] to Officer Shafer if they swear to a teacher because you can swear at anybody all you want outside.”

Despite the need to address behavior, deans recognize that a student might be struggling and that those struggles lead to misbehavior. Freshman Campus Dean Peter Byrne adds that parents have a level of responsibility for their child’s behavior.

“I believe everything starts in the home,” he said. “I think kids are jammed up with all kinds of problems: social, emotional, economic, sometimes even physical. It all starts in the home … Before kids are 18, parents are responsible for their behavior … If their kid drives down the street drunk and hits someone, that kid is going to be responsible, but the parents are also going to be liable for some of that stuff too.”

Byrne also recognizes that often a parent will pay the ticket’s fine and not the student; however, he adds that the ticket can provide access to resources and make a parent aware of their child’s behavior.

“Drugs, vaping, fighting — they all go with a suspension,” he said. “After the suspension is over, we have something called a reentry meeting. At the meeting, several staff members, who all work with the kid, try to give them as much support as [they] can. One of the problems we [have] is that kids that are in poor home situations a lot of the time don’t have support. They don’t know that [therapy, talking to someone and other resources] can help them.”

Byrne adds that once parents are aware of behavior through the ticket, they should be helping their kids, and many do not. “If the kid can’t be held accountable and we can’t teach the parents to hold the kid accountable,” he said, “then what other thing is there? Worst case scenario, we want a parent at home saying ‘enough you made me spend $400 to correct your behavior’ and start getting more active in realizing that [the behavior] will continue.”

As deans with first-hand experience in disciplining students, Agnello and Byrne believe ProPublica and the Chicago Tribune’s “The Price Kids Pay” does not accurately represent what goes into issuing consequences for behavior.

“The thing I have with this situation is that I feel that the research that went into it had intentions of presenting an angle that almost puts schools in a dangerous place,” Agnello said. “If you are allowed to bring a weapon that is illegal or drugs in this building, and you don’t have legal consequences, we would turn this place into a very scary place [for parents] to bring their kids. I think we should guard these walls and protect the people way more … ”

Bringing weapons to school is not allowed and is illegal. Senate Bill 100 aims to meet school threats with the harshest forms of punishment. ProPublica and the Chicago Tribune’s investigation was only focused on minor misbehavior like vaping and fighting.

Byrne adds that each behavioral infraction is complex, and ticketing or not ticketing is not so simple.

“I think that we need to be careful about painting all this stuff into one nice neat package,” he said. “It’s not all nice and easy … every fight is not the same. There are fights we don’t give tickets for. It depends on the situation. I think this article is another example of the media spinning a narrative that is unfair, untrue and needs to be explored more.”

“I guarantee you one thing,” he concludes, “[the reporters] are not a dean, are not an SRO, and have spent very little time in schools. They don’t even know what’s going on in schools. The kids in school today are not the kids that were in the classroom five years ago.”