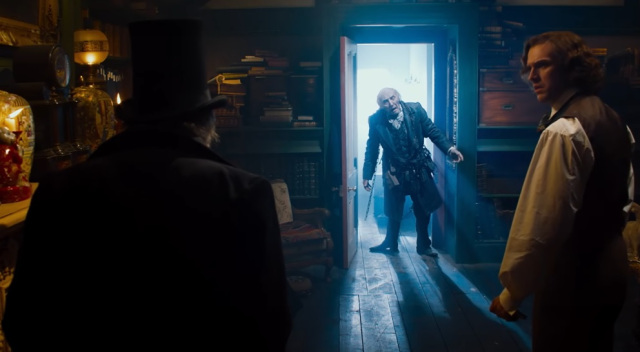 A new spin on the classic story “A Christmas Carol” shows Charles Dickens and his experience writing the classic holiday book.

“The Man Who Invented Christmas”

“The Man Who Invented Christmas” puts a new spin on a classic Christmas story and keeps viewers engaged with intricate set design and a fun story line.

I have to be honest, I had no idea what I was getting myself into when I started watching “The Man Who Invented Christmas”. I was scrolling through Hulu trying to find something that could be good to review when I came across this movie. My expectations were low, but this movie exceeded those expectations so much that I was left in awe.

“The Man Who Invented Christmas” is not so much about Christmas itself, but it’s about Charles Dickens and his experience with writing “A Christmas Carol”. From the idea, to the execution, to the outcome, this movie tells a story of how Dickens was inspired by people he met in real life, including his own family, to create the characters that everyone is so familiar with. There’s even an intense moment where Dickens is shouting out random words in his office trying to think of a name for Scrooge. I’m not sure how entirely historically accurate this film is, but either way, it’s a fun story and it’s a new way of making a movie about the classic book.

“A Christmas Carol” has been redone dozens of times with different characters, animation styles, movie studios, and directors. It’s one of my favorite stories to watch because of how many times it’s been done. I like to look at how each portrayal of these characters is different and how each of them compare. Something I loved about “The Man Who Invented Christmas” is that it’s different. If you pay close attention throughout the movie, Dickens is learning some of the same lessons as Scrooge, along with many more. It puts a new spin on it and makes the other portrayals seem so much more interesting now.

This movie has some really beautiful set design too. I like my movies to be very visually stimulating, otherwise I get bored, and I had no problems with this movie. One of my favorite sets was Dickens’ office because of how intricate some of the details were, and because of the plot points that happen there. The colors tend to match the mood, which is common in many movies. When Dickens has good ideas, or when there’s a heartwarming moment that he is writing, the colors are warm. When Dickens has a darker idea or the scene he is writing is more emotional, the colors are cooler and darker. This use of color to invoke emotion is used a lot, but it works really well, and can make a viewer feel so much more connected to the characters and the movie as a whole.

All in all, I really enjoyed “The Man Who Invented Christmas”. It was a good story with good characters, and I really enjoyed the way it was directed too. This movie could have turned out so boring and dull, but in reality it’s the exact opposite. “The Man Who Invented Christmas” is a great movie for you to watch with your families within the next few days, especially family members who enjoy a little bit of history.

“The Man Who Invented Christmas” Is available on Hulu.