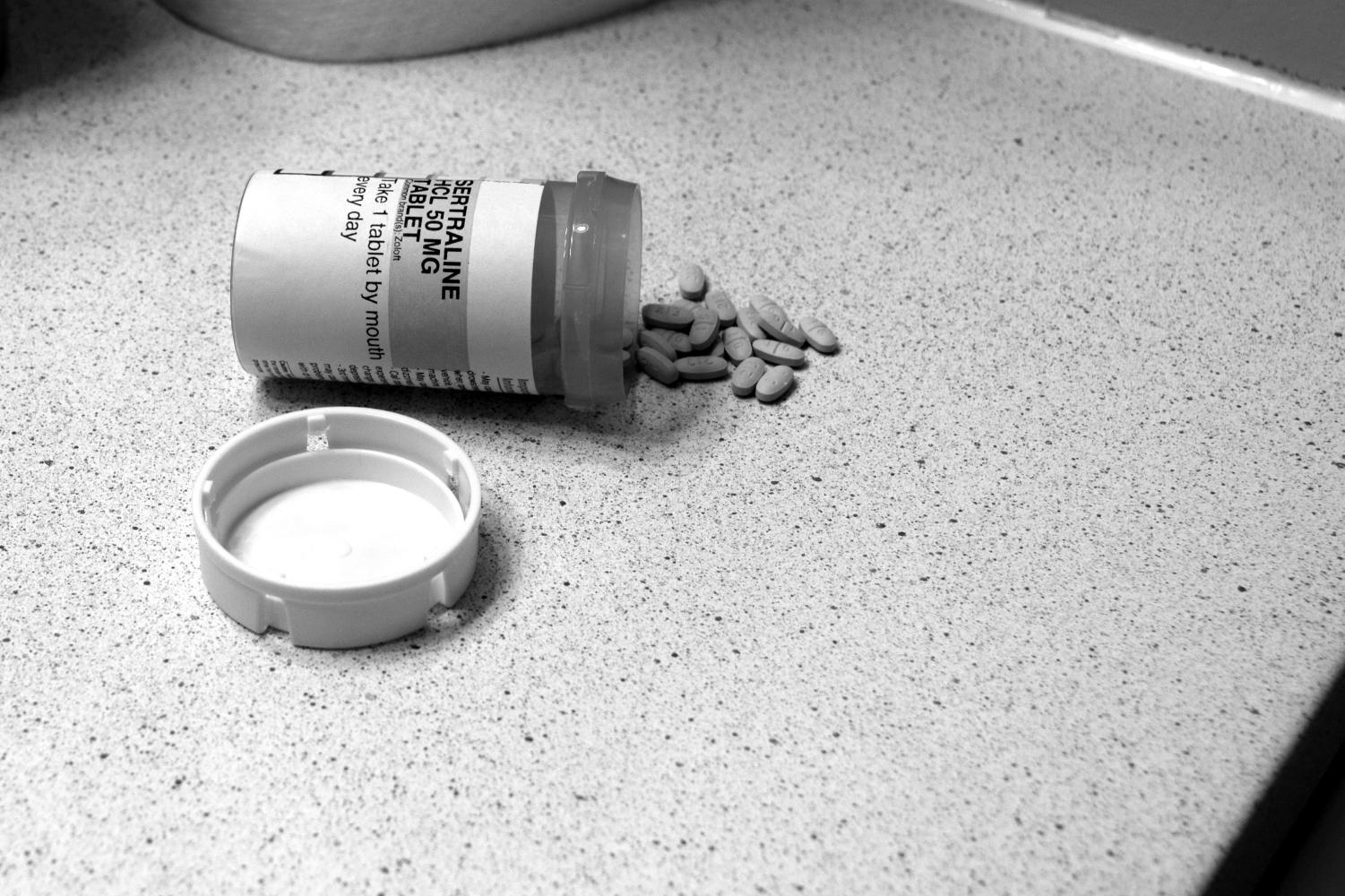 For many students who have struggled with addiction and depression, medication is a helpful way of managing mental illness. The journey toward diagnosis and prescription, though, can take an emotional toll. (Kyla Henige)

For many students who have struggled with addiction and depression, medication is a helpful way of managing mental illness. The journey toward diagnosis and prescription, though, can take an emotional toll.

Essay: You are not alone

Many high school students suffer with mental disorders, but sometimes, it can be hard to reach out

A student smiles, waving, and socializing with all her peers in the hallways. The student is in all honors classes, participates in school events and is always in a good mood. Her life seems perfect to those around her.

But behind closed doors, the student struggles with a variety of mental disorders such as anxiety and depression, sprouting from trauma and bullying, but is too scared and prideful to reach out for help.

For the past nine years, I have struggled with my mental health, which is something not many people know about me. Due to my mental health, I began abusing substances almost daily. Some signs of my deteriorating mental health was; isolation from everyone, lack of motivation, self harm and anxious breakdowns.

On Nov. 20, my mom had me screened and then admitted to AMITA Alexian Brothers Behavioral Hospital, located in Hoffman Estates. There, I was diagnosed with depression, anxiety, an eating disorder and addiction.

To me, having to be admitted to a hospital was embarrassing and upsetting because I had just wished that everyone around me understood how I felt before I got to the point of where I was, I blamed everyone for not noticing me changing.

Not only was I personally embarrassed, but I held a lot of resentment and anger towards my mom because I felt that she had betrayed me and just used hospitalization as an excuse to get rid of me.

Another source, Mental Health America, states that 9.7% of adolescents have severe major depression, 8.37% deal with substance abuse, and 13.78 % suffer from at least one depressive disorder.

When it comes to depression, there is no competition as to who has it more or who has it less. But, according to statistics, women are more likely to deal with mental illness than men. Along with this, the NCBI explains that mental disorders also spread over different racial and ethnic groups.

There are so many factors that play into the different types of people who suffer with mental illness, ranging from gender, to race, genetics, and so many more.

The numbers keep growing for the percent of mental disorders yearly. Some causes of these disorders include bullying, school, work and discrimination. These disorders can lead to a variety of inappropriate or unusual behaviors, including abusing substances, engaging in sexual activity and becoming more restless or violent.

Besides myself, there were four other students that were from MCHS, which I found intriguing, because I thought I was all alone on my journey, but I was wrong. Everyone there, from patients to the nursing staff, was super nice and relatable, which made things a lot easier for me. In the hospital, there were about six therapy sessions a day, with meal and snack time in between, and it was run on a tight schedule.

When I first got admitted I hated it. I did not participate and I isolated myself out from everyone, which was not beneficial towards my treatment at all. Eventually though, I was able to bring myself to get the help I needed because of how supportive the staff was.

Once I was able to bring myself to participate, I also came to realize that the hardest part of hospitalization was getting homework done. In the hospital, school is only done five days a week, for one hour per day. I spent a lot of my time stressing over my workload, and once again felt alone because of where I was stuck. At first my mental health started to spiral again because I could not reach some of my teachers, but that was resolved later into my treatment.

Although, yes, it is hard for the people who are struggling with mental health, what about their family? What exactly do they feel when a loved one is going through such a struggle?

When going into a hospital, a confidentiality agreement is signed, acknowledging that when leaving, nobody in the hospital can contact each other or talk to others about who they saw. Because of this, patient names cannot be mentioned throughout the article, so quotes from these sources will remain anonymous.

One parent explains, “My daughter attempting suicide and sharing how she felt about herself resurfaced raw emotions of when I attempted to commit suicide as a teenager, only this time I was on the other side – a mom that needed to be a rock for her daughter and show my undivided support.  It meant letting her express all her emotions and not taking it personal, which is harder than it seems, and being strong while holding back tears, and fear.”

This parent’s dark past resurfaced through their child, but they knew they had to persevere. Working their way through this event, the parent and family have started and continue to work on communication and how they can support each other.

The parent then goes on to explain, “Behind closed doors, I was a mess, and I’m still a mess when I think about it, because it’s not something you can forget – crying every night, feeling like I failed as a mom, I failed my daughter, and questioned myself on what I could have done differently and how we, as a family, will get through this and move forward.  Overall, this took an emotional toll on not only me, but the entire family, and we learned to communicate more openly and that it’s important to have time for self care.”

Besides family, friends are also impacted by this heavy topic. When a close friend is missing from the equation, friends are easily scared and confused.

“I have at least six or seven friends that have suffered with mental disorders in the past years,” explains senior Carly Bodinus. “The scariest part about it is I never know what is happening when I am not with them, when I will see them next, and what is going on in their head. ” “I like to make sure that if they ever need somebody to talk to I am always there for them and that I will never judge them.”

After in-patient hospitalization for two weeks, I was discharged and sent to a Partial Hospitalization Program, in Crystal Lake, where I met more MCHS students and other kids from surrounding communities. PHP was better than inpatient in the sense that patients only show up for seven hours a day and then go home.

One MCHS student, who prefers to remain anonymous, also found PHP more appealing. She says, “It was easier for me to transfer from inpatient to PHP because I was still getting the help I needed, but I was able to go home at the end of it, which I appreciated.”

I spent about two months in the outpatient facility, where I learned more about mental health, met with a psychiatrist, processed what was going on in my life, and connected with other students who were also struggling. Not only was I able to notice myself changing and progressing, but I was also able to see change in the students around me. The outpatient experience was extremely helpful in self reflection, and as mentioned above, was a smooth transition that made life much easier.

Going back to school

Many students, once finished with PHP, are transfered to IOP which is less time than PHP, and helps get students ready for their transition into school. Before fully transferring to school, students have a school meeting with the school liaison from AMITA and the student’s counselor, social worker, and other staff members that help make the transition smooth.

“For me, the school meeting went smoothly. I was able to cut classes I knew were a struggle for me, and some of my work, alongside finals, were taken off of my ‘to do list’, since I was gone for so long,” says an anonymous patient from MCHS. “It was especially easy because the school liaison was extremely helpful, and the staff were really helpful and understanding.”

One of the people who help with the process is Maura Reid, the Prevention and Wellness Coordinator for MCHS. Reid helps to communicate with teachers, therapists, and most importantly, the students.

“If a student is hospitalized for mental health reasons, I am the district’s point of contact for the hospital(s) to reach out to,” Rield says. “ I will then contact the student’s family to let them know the process of homework, attendance and the transition back to school.  I will make contact with the students’ teachers that a student will be out of school for a period of time (I do not share the reason for the absences) and to gather homework to send to the hospital.”

Reid’s work is not just to focus on transitioning kids, but to help them with their mental health overall. “I think one of the most impactful things I see when working with people struggling with their mental health is to see how resilient people can be. It is amazing to see the growth people can have when they are faced with adverse situations and learn new skills and ways to manage their emotions, behaviors and feelings to improve their lives and relationships.”

When I got back to school, I was too nervous to tell anyone what I went through, because I did not want any negative attention or people to pity me, but I decided that maybe if I tell my story, other people would be more willing to reach out for help, and know they are not alone. With going back to school, I used, and still continue to use, different coping skills to help with my anxiety.

Overall, my experience has really helped me to improve my mental health, along with other aspects of my life such as communication. I am so grateful for my mom, who supported me and got me the help I needed when I needed it. Otherwise, I do not know where I would be right now.

Today, mental health is made out to be a joke, or something that makes people stand out, but in all reality, mental illness is normal and students should not be bullied for having struggles. If students come together to end the negative stigma of mental illness, maybe more people would get the help they need. This being said, if you or someone you know is struggling with mental health, please contact the following:

Or, call 911 for immediate danger 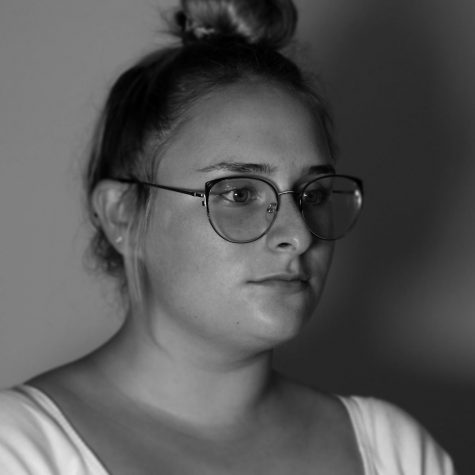 Kyla Henige, Features Editor
Kyla Henige is a senior at McHenry High School's Upper Campus. She has been a part of the Messenger staff since her freshman year, and takes pride in her writing. Kyla is involved in Key Club, StuCo, LIA, soccer, and theater. She intends on joining the National Guard and going to college to study political science and journalism. Kyla is very excited to see even more growth in the newspaper this year, and can't wait to finish what she started.

“Fear of the unknown” (Best of SNO)

“Essay: You are not alone” (1st in IWPA Communications Contest, Best of SNO, IJEA)

“Your offensive language may hurt someone else” (IJEA)