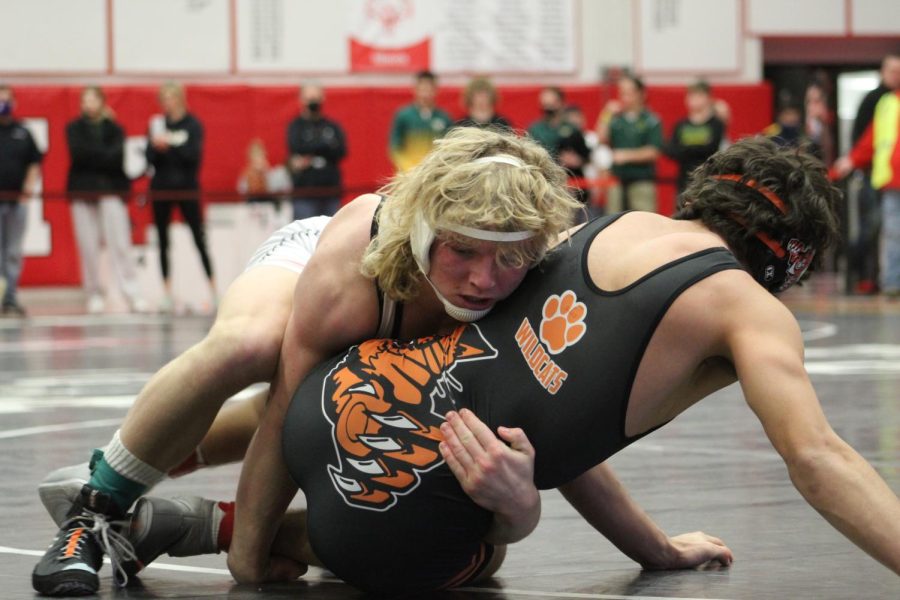 This year has been very successful for the wrestling team, from breaking records to beginning the season nearly undefeated. Many players have created their most memorable season so far and have done their best in their high school career. 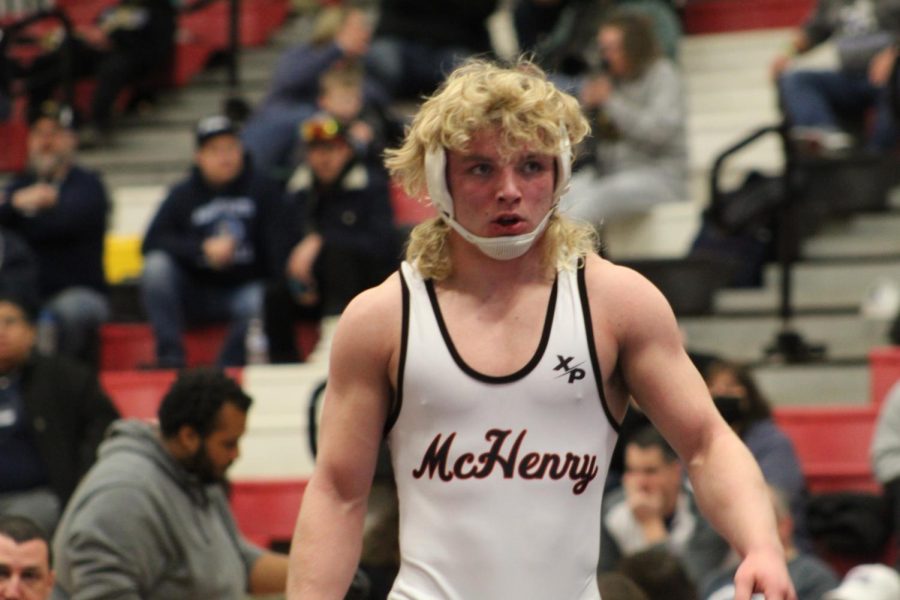 Brody Hallin walks off the mat after winning final match at the Barrington Sectionals tournament on Feb. 12.

Senior wrestler Brody Hallin walks onto the sidelines preparing for his next match. Hallin is at State, competing in the final matches of his high school career. Everything Hallin has worked for has lead up to this very moment.

Hallin started wrestling when he was six years old, though he did not get serious until middle school.

“I feel like starting my sixth grade year was my coach and throughout middle school,” explained Hallin. “He really influenced me to just work. Every practice I just worked to be the hardest working in the room. He’s just one of the best coaches, and he really like showed me how good I could be.”

Influences like that have kept Hallin wrestling all the way through high school. Hard work and determination helped him land on the varsity team his freshman year.

“I guess it was just kind of like really new and kind of had to meet everyone,” described Hallin, “especially with being like a freshman on varsity with meeting a bunch of new guys and a lot of seniors.”

Hallin used his experiences and influence on younger guys to make them feel apart of the team.

“He is a well-rounded person,” explained Pedro Jimenez, a varsity sophomore wrestler, “and has showed me nothing but kindness, respect and has really made sure to make me feel welcome and a part of the team from day one.”

Hallin also influences his teammates to push themselves to continue to get better by encouragement and teaching.

“He raises the intensity of the room as well as helps me with wrestling positions and teaches me new things”, described Jimenez.

Hallin is able to teach and guide the younger wrestlers due to his own personal experiences and how he got to where he is now.

“Brody’s wrestling style has definitely matured over the years,” explained Jacob Guardalabene, the varsity wrestling team’s head coach. “He wrestles with much more confidence now than he did when he was a freshman. When he was a freshman, he had about 5 moves that he liked to use. Now, he has a whole arsenal of moves that he can use during any match.  He has become much more versatile over the years.”

With his versatility has came great success this year and throughout his high school career. Hallin broke MCHS’s record of all time wins, which was previously set by Matt McGowan in 1991 with 135 wins, and is ranked number two in the state with a career record of 146-21, according to Guardalabene. Breaking this record was a goal and motivator for Hallin along with winning.

“I was kind of just in disbelief,” described Hallin. “I didn’t even know I had the record. When I broke the record. I kind of was like wow because it’s been a goal of mine since like eighth grade.”

In the sectional tournament Hallin’s last match was against his pervious match from regionals who was the only person he had lost to the whole season due to a forfeit.

“I lost to that kid last weekend and injured my knee,” explained Hallin, “so it feels good to be back and healed up and just beat that kid.”

“Win a State title — that is the ultimate goal,” explained Hallin. “I’ve been dreaming of it since sixth grade. This is just the best feeling ever. I just feel on top of the world and I am just really happy to be in the place that I am. All my hard work is paying off.”

Hallin competed this weekend for the MCHS wrestling team at the State Farm Center in the state wrestling tournament. He won his first consolation match on Friday, but but suffered an injury default 30 seconds into match for third place. Hallin finished his high school career the fourth best wrestler in the state for his weight class.

For Hallin this is everything he has worked towards and his final matches for the MCHS wrestling team. Win or loose Hallin is walking away with many memories and successes this season. 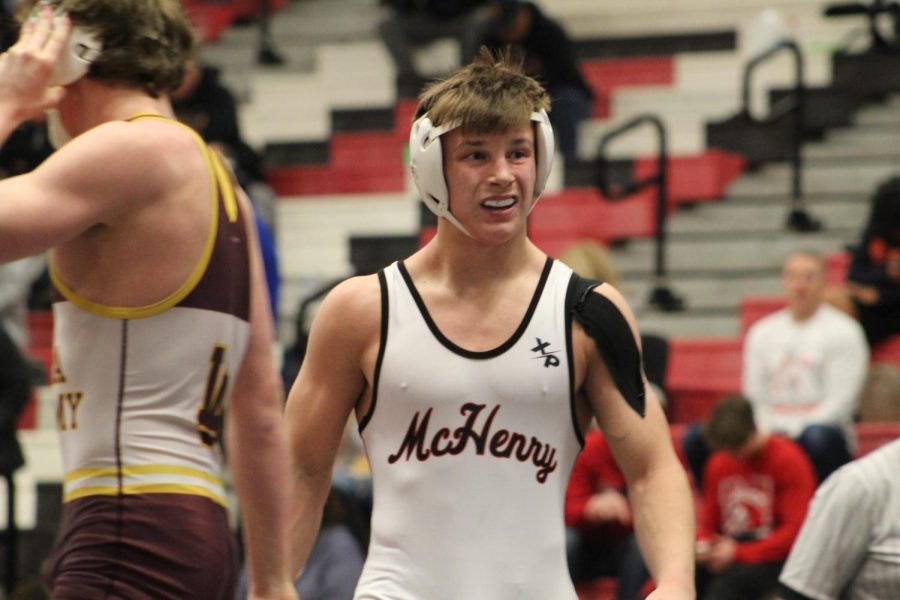 Chris Moore walks off the mat after winning final match at the Barrington Sectionals tournament on Feb. 12.

Junior wrestler Chris Moore walks off the mat after winning in a difficult match in the final round of Sectionals. Having won first place during Sectionals at Barrington High School on Feb. 12, he will Compete at State the following weekend. Even though his career has just begun on the MCHS varsity wrestling team, he has been able to reach great success this season.

Moore transferred from Marian Central this year and began his wrestling career at MCHS.

“It’s a journey. It’s definitely a longer season,” stated Moore. “But it’s just been great and new new school for me this year, so just get to know the guys a lot better.”

Even though Moore transferred here, he says he knew many of the guys from previous years, which has made his transition into the team and the school easier. This season has been one of Moore’s most successful seasons so far.

“The previous years I’ve had some losses,,” explained Moore, “but this year I haven’t lost yet. So it’s obviously been different, not losing and definitely a lot better this year.”

During this time of success, Moore has been able to break records and match his personal goals.

“I broke the takedown record last week Regionals,” explained Moore. “I want to  just stay undefeated. That’s the goal for this year.”

Moore went into Sectionals breaking this record and continuing with his streak of success.

“It’s actually my first time winning the Sectionals,” he says. “It feels good. Now it’s time to work at State.”

According to Moore, he would like to finish out the season by becoming state champion of his weight class. Next year Moore plans to be undefeated and go to state once again, and to hopefully bring the team to team State.

At State over the weekend advanced to the finals of the IHSA Wrestling State Wrestling Championships with a 11-5 decision this morning, according to MCHS’s athletic director Barry Burmeister, but lost a tough championship match in overtime to finish second in the state in his weight class.

Along with Hallin and Moore, Pedro Jimenez, a sophomore wrestler who placed fourth in Sectionals to reach State, and Ruben Melgarejo, a junior wrestler who is an alternate at State, are also working to bring home more State titles. This weekend is huge for the individuals and the wrestling team.

Moore has worked for this successful season since he was younger and plans to continue to work for a even better season next year. He still has a year left on the varsity wrestling team and so many other great goals and records in his grasp for next season.

Editors note: This story was updated to include the final results of the IHSA State Wrestling Championship.